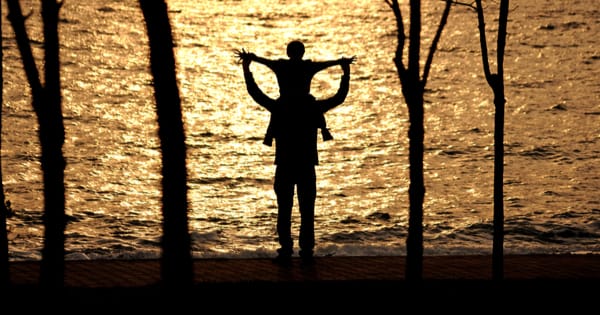 I remember the moment it happened. The doctor smiled at my wife and praised her,

“Looks like you’re dilated, you’re going to have your baby now.”

I can remember the blood rushing from my face, the coldness in my hands, and that all too familiar freezing hard lump in the groin that I feel when I’m scared of something. My wife, she was having her own panic-stricken moment. I can remember her behind the curtain telling the doctor that she isn’t ready yet, that we have so many more things to do.

We both wanted children of course. But nothing prepares you for that moment when they’re ready to come. The moment when you just know your wife is going to go through the most terrible pain that she’s probably ever going to experience in her entire life.

You see, I wasn’t ready. Far from ready. The idea of having kids to me was an awesome one. I never really had any dominant father figure in life. My own one came in and left when it pleased him, or when he wanted something from me, and most of the men that my mum dated never really stood up to the challenge when I was a young lad.

I wanted to prove to myself that I could break the cycle that seemed to pass from father to son in my family, one of not belonging. I wanted to be there for him. But as the lovely doctor lady was gently breaking it to my wife that my son was going to be born in a few hours it dawned on me that I was still essentially a child in a man’s body.

I spent my youth and my early twenties drowning my life at the bottom of a beer glass. I started drinking at the early age of thirteen when my friend introduced me to Merrydown Cider after school when his brother dropped us in some. I remember feeling such a rule breaker and rebel as I gently sucked the sweet-hot liquid from the bottle and let it rest in my stomach. It felt good, and it seemed the more I drank of this liquid the less anxious I would feel.

Thus started me on a long and arduous journey with alcohol, drugs, and sometimes even the law. Oh, and psychiatric hospital. But that’s a history lesson for another day.

We’ll interestingly take up this story again about six months into my sobriety. I was back on the straight and narrow and taking steps to fix my life. I remember overhearing two people talking at work about a problem they had at home. They were around the same age as me and it was something I should have been able to navigate around easily at that age, but I remember thinking at the time I had absolutely no clue what I would do in that situation, and thus it hit me like a lightning bolt. I was just a kid in a man’s body.

Healing from past wounds has quite a lot of terrible realizations attached to it. Several that had me in the fetal position in my bed for a night. This revelation was that alcohol was destroying my brain to a point that I hadn’t learned anything of value since I was a young boy. Alcohol does that. I was so interested in where my next fix was and getting rid of the anxious feeling that I would have done anything to make it happen, anything. Through that, I had missed out in any important lessons that life threw my way from time to time and instead of reflecting on them, shrugged my shoulders and went hunting for my next hit.

I was that 13-year-old waking out of a horrible dream and finding myself in a 26-year-old’s body.

We don’t actually think about it properly but alcohol paralyzes the body slowly. So what I was doing to my body every night was detaching my central nervous system from my motor functions — imagine the neurological impact that must have had on me over a span of 13 years? It was safe to say that I had a lot of catching up to do. I was making progress sure, but I had a long way to go

And yet here I was, in a few hours, about to witness my child being born and I was barely learning to be an adult myself. The thought was as terrifying as it was mystifying. The sheer notion of me bringing up a child was like the blind leading the blind.

I remember that night when we first took Alex home and the several epiphanies I had as I was in bed. Natalie slept as Alex did, and I was left there, one arm stretched over Natalie; my face snuggled into the back of her head as she snored heavily, exhausted from the two-day ordeal she’d been through in the hospital. I remember finally understanding what it was to be a dad. That he was going to depend on me for everything. Love, support, food, compassion, empathy; whatever I was, he was going to mimic and become himself. I realized I was going to be the best person I could for him. I was going to lead the way so that he could clearly follow.

It was all worry in the end. We grew together. I was there. I’ve always been there for him. And it will never matter in the end if we argue. Or if we fall out over stupid stuff like I did with my dad. See, I was there. I was there when he made his first steps. I cheered in appreciation when he happily applauded himself.

Even when we fall out he’ll still know that his father was there for him.

And that’s all I can hope for 🙂