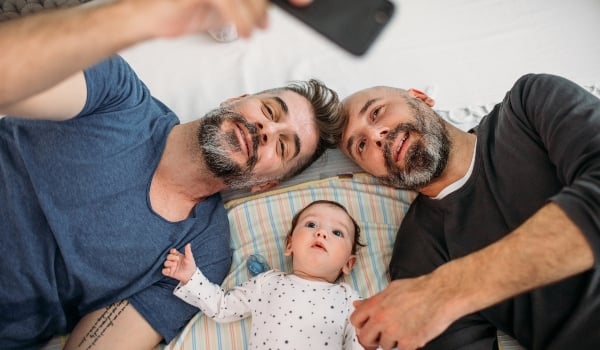 The authors of the research suggest that the reasons behind their finding include a greater attribution of the caring role to women, and they recommend removing gendered and heteronormative language from parental leave regulations.

There are also differences in parental leave entitlements for adoptive parents of different gender orientations. Nine countries do not allow same-sex parent adoption at all (Chile, Czech Republic, Greece, Hungary, Italy, Japan, Poland, Slovakia, South Korea, Switzerland and Turkey), and two countries do not provide leave for adoption (Greece and Switzerland). Most of the rest, 20 in total, provide the same parental leave benefit for all adoptive couples, irrespective of gender combination. In two countries (Mexico and Portugal), different-sex adoptive parents get more parental leave than same-sex female parents, who, in turn, get considerably more than same-sex male parents.

The first is the greater attribution of caring to women then to men, which disadvantages same-sex male parents. Whilst some difference in parental leave entitlements between mothers and fathers is biologically based – the need for recovery from the birth and for the establishment of breastfeeding – the disparities are often more substantial than biology alone would justify. And any parental leave reserved for biological mothers means that same-sex male parents get less time to care for their babies. This can be substantially less: in seven countries, this difference in availability of parental leave is six months long or greater (Czech Republic, Greece, Hungary, Ireland, Italy, Japan, South Korea).

A third factor in discrimination is the wider inequality in marriage and adoption rights for same-sex parents.

The study authors recommend removing from parental leave legislation gendered and heteronormative language that designates women as primary caregivers and assumes that every family has one mother and one father.

The researchers refer to the Yogyakarta Principles, which outline human rights for LBGT people. Principle 24 relates to family benefits and states that “no family may be subjected to discrimination on the basis of the sexual orientation or gender identity of any of its members, including with regard to family-related social welfare and other public benefits.”

Since shared parental leave-taking has been found to be linked to a higher rate of breastfeeding, improved child development, improved parent mental health and better protection from wage or job loss, the inequalities in the legislation expose same-sex parents more to risks than different-sex parents face.