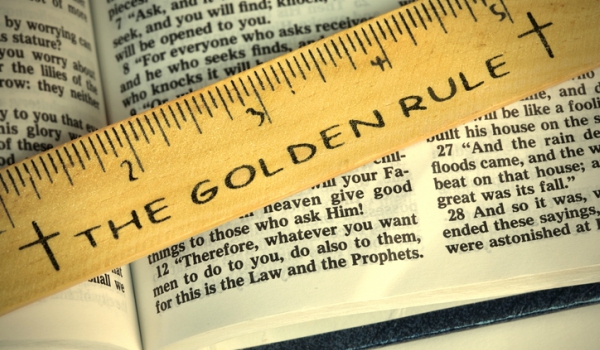 “So in everything, do to others what you would have them do to you, for this sums up the Law and the Prophets.”

Something that I’ve found very interesting about the “religious right” in general and evangelical supporters of Donald Trump in particular: By displaying hostility toward, and thus trying to defeat, folks who don’t agree with their politics they often claim that they want to save American culture from secularism and “bring God back” to society.

The irony is that their very activity is precisely what’s causing America to turn more secular in the first place due to their failure to observe the “golden rule,” taught not only by the LORD Himself but also by most other world religions.

Basically, you simply don’t ignore the essential tenets of religion in order to maintain a veneer of piety for the sake of power.

Something else to ponder: When you have political, social, economic and cultural power, why would you have need of or want the Power of the Holy Spirit? It sounds to me as though such folks are putting themselves in the place that is rightfully His.

You may be thinking, But Christianity in this country is under attack. Frankly, I don’t believe that, and even if that were true, it seems that you’ve forgotten that you, too, were an enemy of God — as I myself was. The difference is that today I understand the dictum “But for the grace of God … ,” and because I get that I’ve been willing to put myself in the shoes of those who may hate me for whatever reason — and I don’t assume that it’s because of my faith.

You see, one thing that much contemporary evangelicalism has lacked over the decades is a willingness to identify with the suffering, especially when the person/people involved don’t share their faith.

Indeed, such compassion for enemies is what motivated Martin Luther King Jr. to preach, directly to them, “One day we shall win freedom, but not only for ourselves. We shall so appeal to your heart and conscience that we shall win you in the process, and our victory will be a double victory” [from “Loving your enemies”].

Want true revival? Then treat people the same way you want to be treated — no insulting or patronizing remarks toward those who don’t agree with you. Remember that you have to earn the right to be heard, and badmouthing them as “godless” doesn’t win hearts, let alone souls.