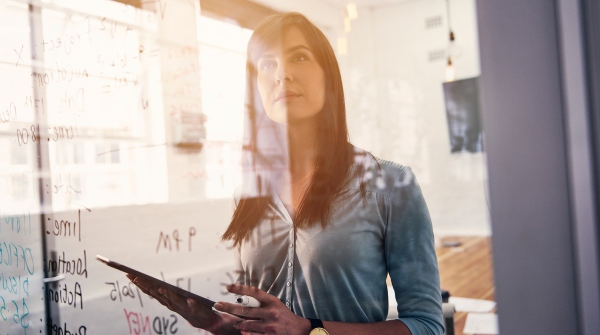 —
The L’Oréal-UNESCO For Women in Science Australia & New Zealand Fellowships recognise the achievements of outstanding female scientists at different stages of their careers. This year’s Australian recipients include a planetary scientist, a virologist, a mechatronic engineer and a paediatric infectious disease specialist.

Bridging the gap between humans and robots

Melbourne-based mechatronic engineer Airlie Chapman is changing the face of a maledominated industry. Focusing on the way robots interact with the world around us, her research could change the way we approach agriculture, defence and search and rescue, to name a few.

Chapman’s research is future-focused and technologically relevant, examining the way the world will integrate and interact with robots, and as a result make certain tasks easier. She takes inspiration from nature to develop algorithms for robots and design functional networks that work together with humans to achieve more efficient and robust outcomes.

“I have always been very maths based. The opportunity to watch something perform and dance to your mathematics is very exciting. You can look at fish swarming, or a flock of birds and you can write the same equation for robots.”

Australia is an ideal location for autonomous technology, as robotic swarms can work collectively to assist humans in covering large areas or entering dangerous environments.

Human-swarm interactions will provide an array of benefits from how water, power and gas grids can work together, to emergency surveillance or military applications in our vast ‘borderless’ country.

Chapman’s research is a vital component in successfully bridging the gap between innovative research and significant impact in the engineering community at large. This research will significantly advance the emerging area of autonomous robotic swarms.

Unlocking the secrets to the universe!

Planetary scientist Katarina Miljkovic wants to satisfy humanity’s core curiosity about our origins, by understanding the evolution of our planets. Sitting at the forefront of space exploration, Miljkovic is the sole Australian collaborator on NASA’s 2018 InSight mission to Mars, due to land in late-November 2018.

With Australia’s first space station in this year’s federal budget, and Mars being reachable within our lifetime, Miljkovic’s work is highly relevant.

“I was always curious about things around me. As a child I remember always wondering what the sun and the moon were, but no one could ever tell me. It wasn’t until I went to university and learnt – that’s burning hydrogen and that’s how we get light!”

The 2018 InSight mission will send a seismometer to Mars which will listen and record meteor events. From this, Miljkovic will analyse the data that will provide important information about the impact cratering — when the planet’s surface is struck by a meteoroid. These events leave very characteristic features that can tell us about how a planet came to be, how we came to be and the evolution of the solar system.

Although different in size, atmosphere and temperature, Mars and Earth contain similar geologic features such as craters, volcanoes and canyons. In fact, it is believed that ancient Mars was similar to Earth as we know it today. Therefore, Mars could answer questions about the ancient habitability of our solar system. Her explorative research is fundamental to a future that is, for many of us, hard to imagine. However, as we plan to expand into space, discovering Martian crustal properties is of great importance when it comes to planning landing missions and investigating signs of extraterrestrial habitability.

Telethon Kids Institute West Australian mother of two and clinical researcher Asha Bowen is conducting a crucial clinical trial that aims to tackle the high incidence of skin infections experienced by Australia’s Indigenous children. Bowen’s research occurs in the Kimberley, Western Australia, one of the most remote and beautiful places in Australia.

Bowen’s passion for research started following her medical degree, when she moved to the Northern Territory to join a skin health mission and discovered that a staggering one in two Indigenous children (45 per cent) suffer from skin infections. This is the highest reported burden of skin infections in the world, in particular of Impetigo (skin sores).

Inequities relating to health and well-being of Indigenous communities is both an international and national priority.

“Australian Indigenous children have some of the highest burden of skin disease in the world, similar to areas that suffer great poverty.”

Although skin infections are a readily treatable condition, they frequently go untreated due to under-recognition and lack of awareness among community members.

Currently, only five per cent of children in these communities suffering from skin sores receive proper treatment. These skin infections are not benign, and if left untreated can lead to bone infections and other complications including heart disease and kidney infections, all of which occur among the highest rates in the world in Aboriginal and Torres Strait Islander peoples.

This clinical trial will involve multiple interventions including training, health promotion and direct evidence-based treatment with the aim to halve the burden of skin infections in 5-9 year olds, and applying the knowledge throughout Australia and the world.

Discovering the link between influenza and obesity

Brisbane-based virologist, Kirsty Short is interested in how obesity affects the influenza virus and how the current obesity epidemic is producing a more vulnerable patient group, susceptible to the flu. Short will also examine the long-term effects of obesity on the immune response to the influenza virus. In 2017, Australia experienced its worst influenza season on record. With over 60 per cent of adults reported as obese and one in four children overweight or obese, this research is of critical importance in protecting the public health of many Australians.

“Even though we’ve made big advances in our understanding about the flu virus we still have a really long way to go.”

Across communities, the severity of flu outbreaks is influenced by the host demographic, including an individual’s underlying conditions. Short believes that obesity has a legacy effect because obesity alters the function of the alveolar macrophages (white blood cells) which play a critical role in the immune system. These immune cells are no longer able to limit influenza virus replication.

As our population is changing, this research will help better understand how prepared we are for future pandemics. Growing up in a family of scientists, Short initially rebelled against the idea of pursuing science as a career. It wasn’t until she completed her first science subject at university that she was hooked. Short’s project will explore the immunological mechanisms underlying this lasting susceptibility to a primary influenza virus infection. By understanding the mechanisms driving this long-term susceptibility, she hopes to be able to design novel clinical approaches to improve the health of billions of people who are, or previously have been, obese.