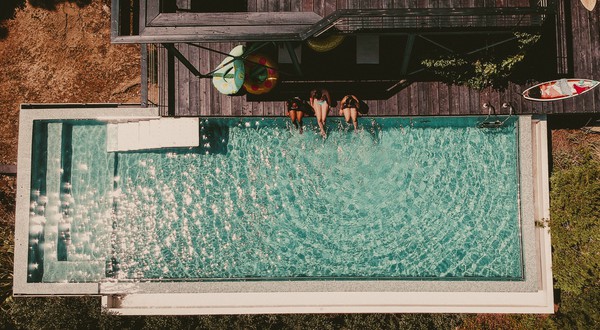 —
It isn’t unreasonable to think of drones as pesky technological nuisances. Our modern digital ecosystem regularly infringes on traditional notions of privacy and bombards our limited attention spans with stimuli. A swarm of drones hovering overhead seems like the physical manifestation of these intrusions and distractions. But we shouldn’t swat them away just yet. Drones still have practical utility and the potential to change industries.

The appeal of drones in the consumer market is obvious. They can capture video footage from exciting angles, serving the vanity of a population obsessed with self-documentation. Beyond that, drones also have commercial and civil government applications that include firefighting, farming, construction, deliveries, and insurance claims. According to Goldman Sachs Research, this contributes to a $100 billion market opportunity between 2016 and 2020.

A drone built by a team at Rutgers University can explore both the sea and the sky, extending the list of suitable applications even further.

The drone, called the Naviator, is part submarine and part aircraft. It can seamlessly dip into the water and explore, then ascend and navigate the air. Although there are already underwater drones, it is this transitional ability that has attracted attention.

The Office of Naval Research partly funded the project. The military applications seem readily apparent—an aerial and aquatic drone could quickly assess threats in the water or on enemy terrain and evade detection. On an industrial level, the same drone could provide quick assessments of a multitude of assets. And, of course, the drone would also make for a very compelling consumer purchase. It might be buzzing around suburban poolsides in the near future.

The project was overseen by Professor Francisco Javier Diez and emerged from the Department of Mechanical and Aerospace Engineering’s Applied Fluids Lab.

In an interview, Diez told me that the search and rescue community has expressed strong interest in the Naviator. His team is also having promising discussions with the oil and gas industry. The Naviator could be deployed from a platform or ship, go underwater, perform imaging tasks, and report back.

It could also conduct bridge inspections and identify vulnerabilities. This is vitally important because America’s aging transportation infrastructure might cause accidents, unless repairs and retrofitting measures are implemented wherever appropriate. If the Naviator meets standards while performing these inspection tasks, it could reduce complexity and increase safety.

When scuba divers inspect the hulls of ships, there is always risk of an accident, but the Naviator could take on that risk.

There is, however, one drawback to the drone. I asked Diez about the adequacy of its underwater vision. Diez mentioned that the current model would perform better in the clear waters of Florida, where testing is being done, as opposed to the often cloudy waters of the Northeast. Acoustic imaging could be used to counteract this murkiness, but it makes the drone heavier.

From Sea to Air and Back Again

Diez said the Naviator started out as a student project that didn’t work very well. The concept then underwent engineering refinements.

Initially, they tried placing an inflatable ring around the vehicle that could bring the drone up out of the water, but this method only worked in still waters. It could perform in small pools, but it wouldn’t have been able to withstand practical field testing.

The hard part, Diez said, was figuring out the transition from one environment to the other. Although this raft-like method could bring the vehicle to the surface, they had to prevent the propellers from touching the water. “If they touch the water, you’re back to square one,” said Diez. “Sometimes worse—sometimes you lose control.”

When this buoyancy system proved to be unreliable, the team rethought the propeller propulsion system.

“Now instead of having four propellers on top, we have four on the top and four  on the bottom. That makes it very stable and able to transition from underwater to the air,” Diez said.

The multiple propellers work to push the device out of the water. The bottom four then stop operating, allowing the top four to operate above the waterline and achieve vertical lift.

“You always have one of the two sets of propellers helping with the transition so you’re never in a bad situation,” said Diez. “Even though that is very simple, that made the difference.”

Now Diez’s team wants to increase the battery capacity as well as the payloads the drone can carry in order to increase its usefulness. However, this means the drone itself will have to become significantly bigger. As development continues, they’re looking to add more sensors and improve the vehicle’s robustness, ease of operations, communications system, and speed. In the above video, the early prototype still relies on a cable for its communications.

There is a dark side to drones. Terrorists have already outfitted drones with bombs and grenades, and FBI Director Christopher Wray believes the risk of a domestic, UAS-facilitated attack is steadily increasing. Drones can also be used to smuggle contraband into prisons. Will improved drone technology lead to an arms race, with automated or remote-controlled swarms duking it out in the seas and the skies?

In an interview, Oleg Vornik, Chief Executive Officer of DroneShield, told me his company manufactures technologies that can detect and disable consumer and commercial-grade drones. The detection capability extends for five kilometers and a drone can be defeated when it roves within two kilometers. The defeat works by radio jamming the communications link between a drone and its controller.

“Drones use frequency ranges based around 2.4ghz, 5.8ghz, 433mhz and 915mhz. We target all of those. Plus optionally GPS as drones also use that,” Vornik said.

—
This post was previously published on www.singularityhub.com and is republished here under a Creative Commons license CC BY-ND 4.0.
—
—