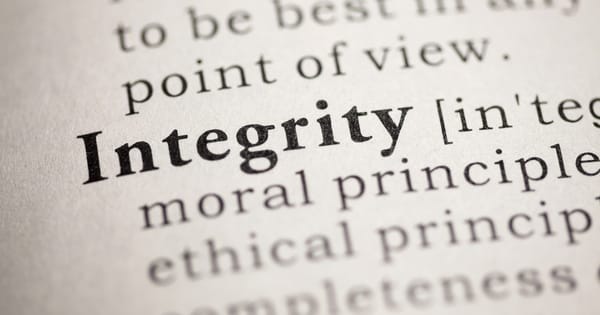 Back in the brief days when I was a cop, there was a popular t-shirt in the law enforcement community. T-shirts were how we did memes in the days before the internet. At any rate, the common pejorative for cops then was “Pigs,” and this t-shirt defined it as “Pride, Integrity, and Guts.”

I think before I get too far into this, I need to make sure everyone knows where I’m speaking from. I was a military police specialist for just over two years in the Army, back when there was still an East and West Germany. Then in the early 90s, I worked at a private liberal arts college in SE Ohio first as a security officer, then as one of the first private college police officers in the state. All told, my law enforcement career lasted about three years.

Most of my MP experience was actually physical security rather than what we called “road duty” – typical law enforcement work. I still managed to work some road duty in at a nearby military community, but that was part-time, and only on my own time. Those shifts were few and far between.

At the college, there were many people both in the town and on campus who looked at us at best as door-shakers, barely competent to write parking tickets. Never mind that we completed the exact same training as local police officers and sheriff’s deputies. It was an era of transition for college law enforcement, and some were slow to embrace the change. The Ohio FOP fought hard against the bill that allowed private college law enforcement, and even when it passed, refused to admit college officers as full members of the order, at least for a time. I don’t know if that has changed.

I was an average young cop, I think. I was competent, both as an MP and at the college. I was aggressively nosy about looking at things that didn’t feel right, and following up on hunches and leads in investigations. I learned how and when to use officer discretion from two seasoned officers. But by the same token, I didn’t have it in me to forcefully confront people. It was too easy for me to back down in too many situations, but I also had trouble controlling what verbal force I used. I could too easily lose my temper. Looking at my abbreviated career with the benefit of twenty-two years of hindsight, I think it’s safe to say it’s a good thing I got out of law enforcement.

So back to the “Pride, Integrity, and Guts” thing.

Pride is good, but it can easily be overdone. The Bible even says something in Proverbs about pride going before a fall, suggesting that overconfidence can lead to mistakes. But it’s good to have some pride in your work because that’s what keeps you doing well. Society tells us to take pleasure or satisfaction in doing something well. We need to have a certain amount of dignity and self-respect, and that flows through pride. “I’m a decent human being. I have value. I have worth. I’m doing a pretty good job of something. I might be able to do better, but I do pretty well as it is.” That’s all a healthy level of pride.

That’s different from “I’m the greatest. I’m the best person ever at something, and no one can do this any better. I’ll always be the best. I never make mistakes.” That’s the kind of prideful behavior that the Bible is warning against.

So it’s good for any professional to take pride in their work. That’s what makes surgeons careful in their cutting and suturing, to avoid scarring a patient needlessly. That’s what makes writers obsess over word choice. It’s what makes cops shine their badges, and make sure their uniforms look sharp. And it’s what drives so many to make sure they get the facts of the case right so they can put the bad guy away.

You’ve got to have guts to be a cop. You’ve got to be brave. This is what makes a cop run to the sound of the guns, or take on a guy twice their size, knowing their backup is half an hour away. It’s what sends them down a dark alley at three in the morning because something doesn’t look quite right.

But bravery isn’t just about tackling the bad guys. Sometimes bravery is about doing the right thing even when no one else is.

Consider some of the police videos that have come out in the last few years months all too often. In almost every single one, there’s a crowd of cops doing something questionable and a bunch of other cops standing around watching. Rarely will you see an officer pull his or her brother in blue back from a beating, or blow the whistle on corruption in her department. Why?

Frank Serpico is one reason. A former NYPD narcotics detective, Serpico spent four years uncovering and reporting corruption within the department. In 1971 during an attempted drug buy, he was shot and nearly killed. His backup officers didn’t follow him into the apartment; they refused to radio an “Officer down” call or call for an ambulance. To this day, some 44 years after he retired, some officers still send him hate mail.

Looking at what happened to Serpico makes it a little easier to understand why officers aren’t so brave about certain things. When you tell your superiors that your coworkers – the ones who are supposed to back you up at oh-dark-thirty – are dirty, you are literally taking your life in your hands.

Dictionary.com defines integrity as “adherence to moral and ethical principles; soundness of moral character; honesty.” One graphic says it’s “choosing your thoughts and actions based on values rather than personal gain.” A classic definition says that “Integrity is doing the right thing when no one is watching.”

Frank Serpico did the right thing, and still carries bullet fragments around in his skull.

It’s not so simple now, is it?

Do individual officers still have integrity? Of course, they do. There are some 800,000 state and local law enforcement officers and another 200,000 or so federal agents in this country. The overwhelming majority of them do their jobs effectively and with great integrity day in and day out.

But a disturbing number don’t, and we never really know how many officers are like that. Why? Because agencies lack organizational integrity.

What I’m talking about here is the kind of integrity that leads you to say in public, “We screwed up, and this is what we’re doing about it.” Officers are fired on a regular basis for doing something wrong, but more often than not, the public doesn’t hear about it. That’s usually because the wrongdoing that got the officer fired wasn’t newsworthy enough to break through the noise of a regular news cycle. If no one got hurt, then it’s not really news. I think though that departments have a duty to inform the public when they find a problem within the department and deal with it. Otherwise, the public thinks that cops are getting away with wrongdoing.

Why don’t more departments publicize that kind of information? Two reasons, I think. The first is to avoid looking bad. No agency wants to let people think it’s full of bad cops, or it’s doing a bad job of hiring, and news of a bunch of firings can do that. In the long run, though, I think the public will come to appreciate the forthrightness of such an agency.

The other reason has two aspects. The first aspect is that even in a public agency, personnel actions are usually thought to be a private matter. That’s even more true for cops. Police disciplinary actions are public record in only a dozen states, according to this investigation at WNYC Radio. Much of that stems from the power of police unions, which is the other aspect. Unions will fight tooth and nail to whittle out police exceptions to multiple laws, claiming they can’t do their jobs safely without these exceptions.

I think that attitude is wrong and that public employee unions have probably become too powerful, but that’s a topic for a different post.

What Are You Trying To Say, Bob?

Law enforcement has managed to polarize the country now. It seems that calling for stiff oversight or more accountability is seen as anti-cop, no matter how it’s phrased.

But it’s not wrong to want your cops – the government agents with authority to strip you of your liberty, or even kill you – held to a higher standard.

It’s not anti-cop to expect them to uphold the law all the time, especially when it comes to their own.

We didn’t get to where we are overnight, and these kinds of issues aren’t going to go away quickly. But most agencies can do more to improve community relations than they are, and it starts with reassessing their organizational integrity.