Get Daily Email
Join/Login CLOSE
Home / Featured Content / What Is the Pronoun for God? 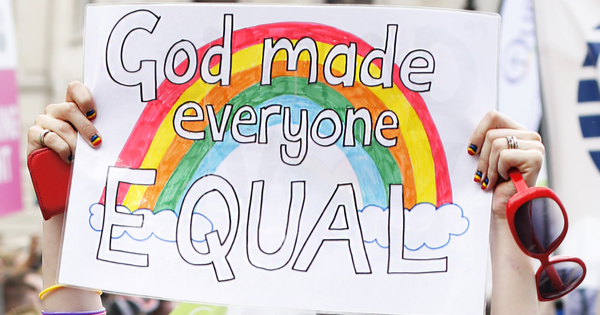 Ramadan just started, and I’ve been thinking a lot about God lately. And I use the word “God” because “God” is the English translation of “Allah”. Muslims, Christians, and Jews all believe in the same God. It’s really only the details, like the role of Jesus, that have caused – and continue to cause – a lot of death and pain in the world.

So, God. I think many of us can agree that the creator isn’t exactly the bearded, old man that Michaelangelo pictured. But, then, if God isn’t a “He”, how does one talk of God? What pronouns does one use?

Several times, when I’ve been talking – or more commonly, writing – about God, I’ve done things like this:

“I don’t think that HE/She/It cares if I scrub my feet three times before praying.”

Now that’s a mouthful! And not the best way to acknowledge that God isn’t exactly a “Father”. At least, God isn’t a man, exactly.

How to refer to God, then? The answer, of course, has been sitting right in front of me all along. Non-binary pronouns. Because, if God isn’t a “He”, and God isn’t a “She”, God’s either an “It” or a “They”. And “It” has always made me feel awful – dehumanizing the very force that gives us our humanity. I think we need to simply accept that God is non-binary.

And then I need to get better at non-binary pronouns.

It shouldn’t be difficult. Any native English speaker, when you say something like, “I met this oddly dressed person at the bar last night,” could ask, “What were they wearing?” Not minding that they’re using the word “they” to refer to only one person. (I just did it in the last sentence – I bet you didn’t even notice!)

So why is it so hard for us to call someone we know “they”?

Non-binary pronouns, at least how they’ve been traditionally used since Shakespeare’s time, represent an ambiguous, unknown gender. I think it’s hard for people to use them when talking about someone they DO know, well enough to know that they prefer “they” pronouns!

But you have to recognize this. You may know the person very well – they may be your best friend – but their gender is NOT something you have the vaguest idea about. With non-binary people, their gender isn’t “woman” or “man”. Sometimes it’s in between, sometimes it’s off the spectrum entirely. Sometimes it migrates, day to day, depending on how they’re feeling. That’s why many like it if we refer to them the same way we refer to a stranger whose gender we don’t know. “They”.

I think this works well for God too. God isn’t someone – or something – whose gender we have the slightest idea about.

Certainly, They aren’t a woman or man – thereby excluding the other half of humanity, along with all non-binary people. God isn’t like this. God is all-inclusive; when I was raised in a Catholic school, though we all called God “He”, there was one chapter in our religion book that mentioned how God is, at the same time, like a mother.

And (I’m adding) God is like a “parent”, genderless, non-binary, gender fluid – and everything that is humanly possible. If you truly believe that God is omnipotent, why can’t They be all of these things?