Get Daily Email
Join/Login CLOSE
Home / Featured Content / When Do You Surrender, and to What? 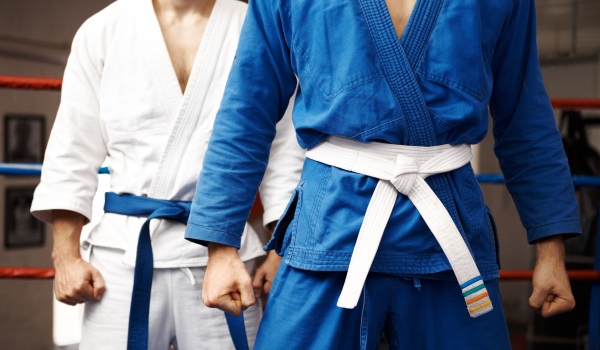 —
In Sunday morning Aikido class, we practiced technique: Someone attacks from the front grabbing both your hands, ryote-tori. I trained with my dear friend Jackson. We’ve trained together for nearly 20 years.

As I came to grab Jackson’s hands, Sensei Bobby instructed me to move in as deep as I could. Jackson led my movement with his body into the throw. When I came in as far as I could arching my back, which at 57 years-old isn’t that much, I took the fall to the mat. I made myself fall. When it was my turn, Jackson did the same, taking his fall to the mat. We both surrendered to the technique. We both practiced surrender.

O-Sensei Morihei Ueshiba said, “There are no contests in the Art of Peace. A true warrior is invincible because he or she contests with nothing. Defeat means to defeat the mind of contention that we harbor within.”

After my first few years of Aikido training with Sensei Dan, perhaps even after I made Shodan, first-degree black belt, I got: I really don’t know shit. Actually, I knew less than shit: I knew nothing. I also got that whatever, I did know wasn’t all that useful. I surrendered to the mastery journey. I’ve been on that journey ever since.

No, I’m on master. That’s never been my aspiration or goal. I got from Sensei Dan and now Sensei Bobby: Mastery is about the training, what you’re willing to give up. Sensei always told Bobby and me, “Just train.” I continually surrender to Aikido, to what I love.

Throughout, I’ve been fortunate my muse was Sensei Dan; now continuing with Sensei Bobby. I surrender because there’s no contest. I give all of myself, all in. I give up myself, getting out of the way, as much as possible. In doing so, I grant permission to my Muse. My surrender is something that’s meaningful to me.

I surrender to my writing. I’ve self-published my book on Amazon. I’m working on my next books. I write posts on The Good Men Project. I write because there’s something meaningful enough for me to say, to put into words. No, I’m not “telling” anyone to do anything. After all, you’re the expert on your own life.

My hope is that what I have to say might make some small difference, expressing what I’ve gotten from looking at my life lived. So really: I’m just saying. I’m ‘that guy” just talking. Take what might occur as valuable. Discard the rest, which also might be all of it. Though, nothing personal. Again, just saying.

Perhaps, our biggest surrender is to life. Yet, isn’t life something worth being all in, and giving up yourself for? I’ve looked at the idea of Mastery in Life.

No, I’ll never possess that. Rather, I follow the words of Sensei, “Just train.” And perhaps, one day I’ll have true victory of myself. Although, I ain’t holdin’ my breath.

So meanwhile, I surrender to Aikido, to falling madly and deeply in love, and to saying something that’s meaningful to me. Among a couple of other things.

So what do you surrender to? Just asking, this time.

Facebook12Tweet2Pin1EmailShares15
wpDiscuz
0
0
Would love your thoughts, please comment.x
()
x
| Reply
Share this ArticleLike this article? Email it to a friend!
Email sent!