How do you know when you’ve become a man?

This article by Earl Hipp was previously published on the Man-Making Blog, and is reprinted here with permission.

Stop reading for a moment, close your eyes, and try to remember . . . when did you, without question, become a “man?”

When was that moment in time when you knew, for sure and without doubt, you were now a certified “man?” When did you irrevocably cross the line from boyhood to manhood, accept adult male responsibilities, and thereafter were seen and treated as a man in the eyes of your family, peers, and community?

When I asked this question of men as part of the research for the Man-Making book, some men said it was when they got a license to drive, cast their first vote, or had sex for the first time. Other men said, “when I went into the service,” “when I had a child,” or “when I got a gun(gang member).” There were a few men who experienced rites of passage in their religious community, in scouting or in a gang. But by far the most common response to that question was, “I’m not sure I am a “man” today!” Most men said they had never definitively crossed a clear or obvious line into manhood and remained uncertain men today.

When I say “uncertain men,” I mean these guys were fully functional males in the world today, but they were confused about what attributes define a mature and fully realized man in their society. They were uncertain about the criteria for becoming a man, the achievement path to that goal, if there is one, and not at all clear about how or who will ultimately bestow the blessing of one day having become “a real man.”

If uncertainty is a theme for men, consider how hard/impossible it is for adolescent males, without good men around them, to ever feel they been set on a positive path toward a solid manhood. They are being propelled toward manhood by testosterone, a hormone drives them to action, intensity, sexual expression, and the need to constantly test and prove themselves in some way. Without guidance, these natural expressions of young male energy, combined with an underdeveloped capacity for thinking through the consequences of their choices, all too often have terribly tragic consequences. It’s why I say we don’t so much have a violence problem in our communities, but an epidemic of under-male-nourished boys.

Ancient rites of passage, perfected over thousands of years, were exquisitely designed to get the attention of young males and help them shape their mature masculine identity. Sadly, positive passage experiences for males are hard to come by today, and too many males are left to wander in that never-never land between boyhood and manhood. 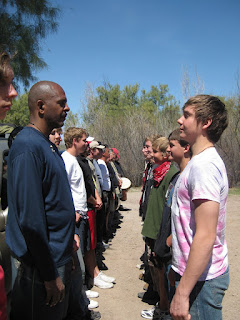 Because I believe in intentional man-making, I feel it’s critical to acknowledge a young male’s passage from the world of boyish things into young adulthood. One of the ways I do that is to work with groups of men who are initiating adolescent males in rite of passage experiences. This work clearly sets boys on a positive journey toward manhood, and lets them know they are supported by men. The second reason for these events is to offer an experience in which men can discover they are indeed hardwired for this work. By initiating young males, men can find answers to some of their lingering questions about what constitutes “a real man.” I’ll continue to write about this in future posts.

From my research and experiences, I’ve learned that male rite of passage events, wherever they occur, have some common and important elements. Remember, this template has emerged from thousands of years of man-making experience from cultures across the globe. VERY simply and generally stated, here is a short list:

Just below is a video giving us a look at a day out of a month-long male rite of passage experience from the Palambi Tribe in Papau New Guinea. This not-so-ancient event was filmed in 2007. Read through the list above once more, and then see if you can find those elements in this Palambi passage experience.

If the clip doesn’t show up, use this link.

Clearly this example doesn’t fit the world most of us inhabit. But it was most likely built on a few hundred years experience with man-making. In 2007, after their month of training and preparation, on returning to their village, these initiates will have no question they have crossed a line into manhood, and that’s quite the gift.

If you want to learn how to create a culturally relevant and contemporary rite of passage experience for the boys in your world, give me a shout. I’m happy to be a guide to help create the experience. Along the way, I’ll help you and your men friends discover you really are hardwired for this work.

(Check out more questions for men about manhood on the Man-Making website.)
Read more in Education.
Image of man shaving in the morning courtesy of Shutterstock; image of men lined up facing one another courtesy of the author
Don’t like ads? Become a supporter and enjoy The Good Men Project ad free

Earl Hipp runs a blog about men, boys, male culture, mentoring, rites of passage, and men helping boys on their journey to manhood. You can find it at ManMaking.com You can follow Earl on Google+.

All, On trip to Europe w/bad net connection… quickly… on male rite of passage we do not make “men” but (very simply put) bring young males questions about the man they want to become (including GLBTQ) males. We then surround and support them in making commitments to their choices, and honor and celebrate this crossing time in their lives. At the end of the experience they get the title “Journeyman.” Identifying them as a young man intentionally set on a path toward manhood. Even done imperfectly, this is FAR better then the abandonment too many young males experience today.. I… Read more »

It’s true that this isn’t a strictly gendered experience, as the two posters above me have pointed out. But the author isn’t comparing men to women here. If anything, he’s comparing today’s men to men of decades past, or modern Americanized/Westernized men to tribal societies that still observe masculine rituals. Whether or not women have such rites, or whether or not women need them, is sort of beside the point and has little bearing on whether or not men have/need them. And women should resist the urge to scoff or mock the idea of a male rite of passage; that… Read more »

But there are two paths to adulthood, the male path and the female path. They have many basic similarities but they run parallel; they do not intersect or merge. A woman cannot know what it means to become a man, nor can a man know what it is like to become a woman. It just be me, being so old that I must be generation Alpha and a personal acquaintance of Methuselah, but why is it that people have to grow up to be Men or Women? Can’t they just grow up to be Adult? The gender stereotypes and cultural/social… Read more »

“It just be me, being so old that I must be generation Alpha and a personal acquaintance of Methuselah, but why is it that people have to grow up to be Men or Women? Can’t they just grow up to be Adult?” Perhaps because people have grown up to be men or women since, oh, the beginning of the human race. As a matter of fact, I (and no doubt most of the guys here) happen to like being a man. While there are some drawbacks as a whole I like my gender and my gender role. As for the… Read more »

I don’t see why there needs to be a rite of passage period. I don’t know of any women who feel like they need a rite of passage–and I’m tired of the argument that our periods are our passage into womanhood. If this were true, my family would have given me a fanfare, but I can assure you the days girls get their periods, they’re just given pads, tampons, and whatever essentials, but no dramatic rites of passage this article seems to advocate for boys. Maybe it’s just me, but I see no one writing about women needing external validation… Read more »

So masculinity is a social construct defined by society – and if you take the obverse that means the same folds of femininity. One wonders then, why men are being increasingly excluded from the dialogue on what Masculinity is? There does seem to be a preponderance and ongoing bias (especially in the media) in certain gendered voices being party to that Dialogue and what it is all about. I don’t see how taking a bunch of guys off in the the wilderness for the weekend can add to that dialogue. It can add to stereotypes and even stereotypical behaviour, but… Read more »

To respond to some of your points, MediaHound: As the author notes, it’s traditional to take boys away from the comforts of home for a rite of passage. “The boondocks” is a great place to “get away.” Even if you live in a boondock, there’s always another, some uncomfortable distance away…. My own son is in basic training right now. Classic example. Extremely limited contact with his family, deprivation, skills transfer. He sought it out for himself. Other men will seek out other ways to do it. One advantage of a pluralistic society like my own is that we can… Read more »

Justin – as I have said , I do find this whole Rights Of Passage idea “Odd”. I know it can be traced back to “The Mythopoetic Men’s Movement” (Now Defunct) and the mythology around archetypes of Hunter, Warrior, Mystic and supposedly Incredible Lover (Multiple Orgasm Guaranteed) – and the ideas of some in the field of Sociology and Ethnography. But, in so many ways it’s a nonsensical debate. It even gets mixed up with the whole Modern Primitive meme and people attempting to be “Authentic” and real whilst painting body parts blue and running around naked because it’s Imbolc… Read more »