Get Daily Email
Join/Login CLOSE
Home / Parenting / Is it Important Not to Let Your Child Into Your Bed? 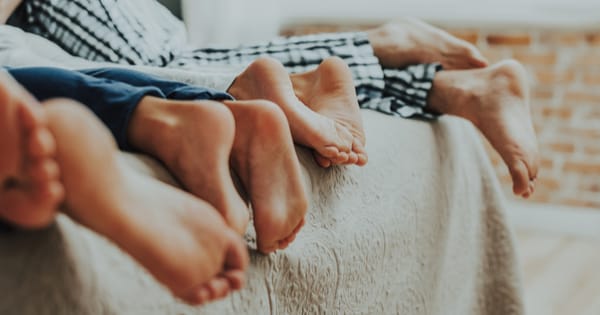 I sat here with red itchy eyes, wishing for a larger coffee pot and considering putting a lock on the bedroom door.

After a very long but surprisingly good day at around midnight there was nothing I wanted more than my bed, not a thing was going to stand in my way, I was looking at that bed with the same level of inevitability of a table leg looking at a pinkie toe, it was mine for the taking.

The problem being the small bundle laying hid beneath the quilt covers, my darling six-year-old daughter. It was late I was exhausted, she’d obviously got into my bed for comfort for whatever reason and I was just too tired and if I think about it un-motivated to move her. She looked warm comfortable and cute, to be honest, so my gentle side came out and decided she could stay.

Sh*t started before I could get my head on the pillow. That little bag of a$$ holes had suddenly learned Kung-f*cking-fu and I had a heel under my ribs, I moved her foot she moved it back. Rinse, wash, repeat was carried out for longer than I care to admit. I moved her back to her previous fetal position way over the other side of the super king size bed.

The moment I tucked her, in the quilt was in a ball at the bottom of the bed, and three foot of f*ckery was laid across the pillows. I wasn’t having that. This is my house, I am the man, I make the rules!

However as I’ve previously learned apparently the memo detailing this hadn’t made it past the dogs, so most people under this roof think of me as some kind of miserable butler with odd habits.

This was completely re-iterated to me when I woke her up to explain in my best daddy voice available to me at that time, that in fact yes this is my bed and shock horror I would really quite like to use a portion of it on this fine evening to sleep, and well if she didn’t like it there is a perfectly good bed with her name in it in another room.

She grumbled muttered, rolled over stole half the quilt and farted. But hey would you look at that there’s a space just for me, I’m not a man of frivolous needs and I was content with this, I lay down it was comfortable.

Right, let’s do this, alarm off check… phones on silent check… I’m ready I’d even planned my lie in I smiled as I closed my eyes.

You never stop learning when you have children I have learned far more from mine than I could ever hope to teach, these lessons are often delivered in the most unexpected ways at the most inconvenient times. Last night I learned that the little girl child thingy I live with grinds her teeth in her sleep.

Apparently however I did get some sleep because I was also woken up this morning. At seven by a child which normally has only hatred in her eyes before midday.

As I was being ushered downstairs with demands of tea, biscuits, and cereal. I was whinging and cussing about the tragedy of my lie in that just wasn’t meant to be when something she said cut through it all. She said, “well maybe you might remember this when its a school day then”.

I have no words. there’s simply not enough coffee, I’ve checked. I would say at least she has stopped telling spider-man to bite some poor fellas eye out, but she is now doing her impression of a Taylor Swift tribute act.