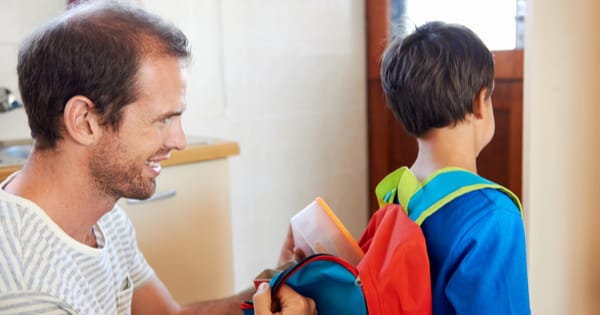 Because it is so far from what we’re used to regarding the norms of traditional family roles, the-stay-at-home fathers as a concept has been receiving some raised eyebrows lately. The stigma surrounding this concept and the idea of reversed gender roles have been increasingly challenging the views of what a modern family is or should be. With the third wave of feminism on the rise, and women getting recognized as equal in numerous industries and careers, the fact they’re becoming equal to men in other regions of life as well should have been normalized by now. However, in the case of staying-at-home and watching out for the kids and the household is still described as the woman’s job, rather than something that both parents should be able to do. Not to mention that those fathers are receiving all the backlash, because, as we all know, the man belongs in the office, and the woman belongs in the kitchen. Right?

The truth is, the reversed gender roles have helped out so many families out there. It is estimated that approximately half a million fathers are stay-at-home, raising children. And, despite the social awkwardness of the wife being the breadwinner, many families are getting by and prove that reversed genders roles could be the new outlook on those roles that could actually normalize them. So, in order to contribute to the social discussion, we’ve decided to take a look into the usual stigma that surrounds these families; what are the main misconceptions people have when it comes to stay-at-home fathers? But, before we dive in, make sure to click away for a second and visit PaidPaper in case you are wondering “is edubirdie legit?”, or if some help with finding the best writing service.

Where is his masculinity?

A man’s job is not to do the woman’s work around the house; that is the usual argument for those who firmly believe that stay-at-home-fathers are a disgrace to all the real, masculine men out there. There is nothing masculine about taking care of your children and helping out your wife around the house. This stereotype of man’s vulnerable masculinity has been persistent in the isolating role men usually have when it comes to taking care of children, helping around the house or letting women do their job. Many disregard the fact that the stay-at-home fathers are not decreasing their masculinity just because they are stepping in and proving that they are capable of doing the hard work as well.

Personally, I believe that a masculine man can face the fact that raising children and looking around the place he lives in has nothing to do with femininity or masculinity. Sure, some might think that the masculinity part is actually intended for the fact that stay-at-home fathers have no real job. Still, the argumentation holds, because, by staying at home and taking care of children, these men actually have a job they’re just not paid for. Women have been doing it for hundreds of years, right?

Are you just looking for a job?

This is a commonly asked question when people cannot comprehend that fact that someone is a stay-at-home father. They either think a particular man has just lost his job and is staying at home because he’s job hunting. Sure, whatever floats their boat; people will think what they want to think. However, it is just not right to associate a stay-at-home father with someone who doesn’t want to work or is just taking some time off until he finds a new job.  Stay-at-home fathers are not looking for a job; they already have one; it’s called being a parent and a good, loving and supporting husband who is not afraid to leave the breadwinning to his wife. Imagine being that sure about your masculinity and your position in marriage.

Apparently, many men, and women, out there are simply neglecting the fact that there is nothing harder than raising children and taking care of the household. And, when women get to take credit for staying at home and raising children, we usually support them, but when a man does the same, we criticize and condemn. What’s with the double standards nowadays? According to research, some of the main reason men choose to become stay-at-home fathers include support, day-care alternative, personality preference, values about fatherhood, etc. A small number of men mentioned their reasons to be work-related, so why do we as a society look into this topic with such negativity?

You could never replace your wife.

Another stigma surrounding the stay-at-home fathers revolves around the idea that men cannot take care of their children as well as women. It has become acceptable to criticize men in every aspect of being a stay-at-home father, even when going as far as to say that someone is not capable of doing an excellent job in raising his own kids. Personally, I find it outrageous that people would even think of something like that.

The typical advice stay-at-home father receive usually go something like this; you handled that tantrum incorrectly, or, your kids are dressed wrong, and the personal favorite, those children should be with their mother. People assume that a man can’t be competent in taking care of his own children. And, not to mention, no one really takes in consideration how hurtful it must be for a father to be told that he shouldn’t be the one taking care of his children. A stay-at-home father is not supposed to replace his wife; he is just doing what every father should do, only full-time. It’s not like the wife doesn’t do the same once she gets back from work. It’s called parenting, and the families that function in this way are surely going to raise some wonderful, tolerant and open-minded adults who are going to change the world one day.