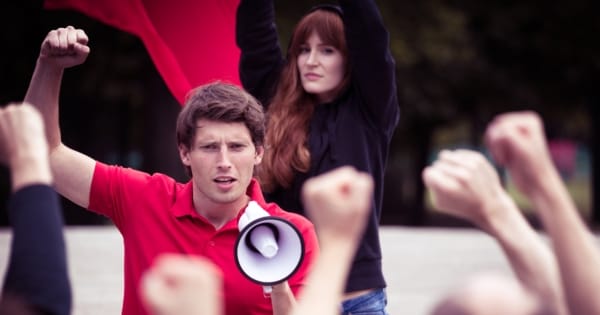 Sure, that’s not as great a quote as Uncle Ben’s “With great power comes great responsibility,” but it’s just as true.

You couldn’t have explained apathy to me when I was young, because youth is all about passion. And man, was I “passionate.” I had a chip on my shoulder like nobody’s business, and was angry because the world was so unfair. Racism, homophobia, sexism… I wanted to rage against the machine, and fight for what was right.

Then one day I blinked and twenty years had gone by. An African-American man was elected president, but racism still existed. Marriage equality became the law of the land, but homophobia was still ever-present. Roe v. Wade hasn’t been overturned, but people still attack women’s rights at every opportunity.

I realized that progress is incremental, and that being “passionate” just irritates people. When I see that same “anger-over-injustice” in the eyes of kids, I nod my head in understanding, get out of their way, and live my life.

My desire for “CHANGE NOW, GODDAMMIT” is gone, and it ain’t coming back. As you age, passion leaves you like a Cleveland Browns fan three games into the season. Why? Well, let me repeat myself, and then offer you a challenge.

Change is incremental. That’s me repeating myself. I read once that you have to tell people something seven times to get it to sink in. Personally, I think my wife would say she has to tell me something one thousand times before I get it, but for the rest of the world (read: “people smarter than me”), it’s seven times.

So, if I repeat myself, forgive me.

What’s different between the two? The names of the leaders, and nothing more.

The turmoil in the Middle East is like the Energizer Bunny: it just keeps going. Sure, there are flare ups here and there as well as moments of quiet, but overall things are the same as they were twenty, thirty, and forty years ago. People keep screaming for peace, or justice, or whatever they’re screaming about but if anything is actually happening, it’s doing so at a snail’s pace.

That’s just one example; here’s another: this past holiday season, you saw all the same impassioned pleas you see every year you’ve been alive, didn’t you?

“Thanksgiving should be about family, not Black Friday shopping!”

Yet some stores were still open at 5 or 6 PM on Thanksgiving, because people will do what they want to do, regardless of what they’re told to do.

Yet no matter what Starbucks does with their “Holiday” cup this year, a segment of the population will be outraged by their decision. If Starbucks were to write “Merry Christmas” all over their cup, people would ask, “Where’s Baby Jesus!? Why isn’t Baby Jesus on the cup?!”

That’s life. People will be outraged no matter what you do. Humans are unreasonable, and illogical.

Look at politics; the Democratic Party, to be specific. They just came off their biggest victory in years. They elected a diverse group of fresh, young faces. And who is going to lead those fresh, young faces? One of the oldest fixtures of the Democratic establishment, Nancy Pelosi. And look who just tossed their hat in the 2020 Presidential Election ring: it’s the spritely newcomer, Bernie Sanders!

Now examine Republicans, and how they vote.

In 2000, after eight years of economic growth, Republican voters said, “Enough of this progress! We need someone new!” and voted for Bush Jr. in great enough numbers to make the Supreme Court believe they should install him in the White House.

In 2008, after Jr. bankrupted America just as experts said he would, Republicans said, “We need to keep voting the same way!”

In 2016, after Obama led America on a path of economic growth and kept a recession from becoming a second depression, Republicans were so angry they said, “No more Democrats! We need someone who has declared bankruptcy four times, has numerous lawsuits against him for failing to pay his bills, and who sexually assaults women!”

The point is: people do not listen to reason, yelling, begging, or logic. People do what they want to do, and if they change it happens over many years, not all at once. You can be angry about this, frustrated by it, or accept it.

I choose to accept it, because I’ve lived long enough to understand that life is like a lyric in the song White Knuckles, by OK Go:

Nothing ever doesn’t change, but nothing changes much.

So, the moral of the story is that you should always work towards progress, but please: check your passion at the door.