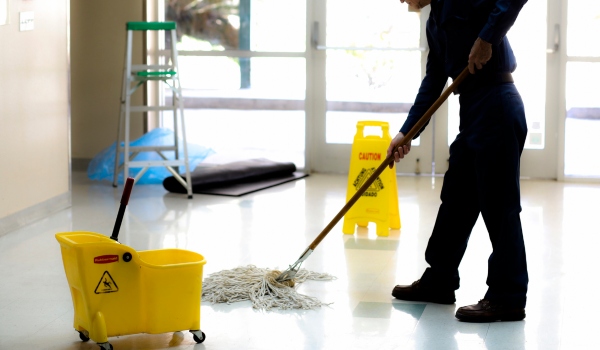 The debate over America’s federal budget is getting stale — and getting us nowhere, as the latest government shutdown depressingly reminds us. Political obsession over budget deficits has now morphed into legislative extortion.

Today, more than ever, we need to refocus the federal “tax and spend” debate from deficits to inequality. Two researchers from the New York think tank Demos are trying. They’ve released a new report that homes in on the no-man’s-land between the public and private sector that has left hundreds of thousands of Americans poor and a lucky few fabulously rich.

This no-man’s-land has expanded enormously over recent years as the federal government has contracted out and privatized one public service after another.

Those janitors who clean Smithsonian museums? Those cooks at military bases? Those programmers writing software for Medicare? More and more of the workers who keep our government running work for private contractors.

And many of these workers, note Demos analysts Robert Hiltonsmith and Amy Traub, don’t make much at all in the way of compensation. About 560,000 Americans employed by contractors have jobs that pay $12 an hour or less.

Meanwhile, the executives who run these companies are doing quite well — thanks to our tax dollars. The federal government reimburses private firms for up to $763,039 of the executive compensation they lay out, a figure that will shortly rise to $950,000 under the formula current federal law sets out.

In other words, our tax dollars are compensating private contractor executives at a level three times higher than Joe Biden’s paycheck.

These dollars add up. In their new Demos study, Underwriting Executive Excess, researchers Hiltonsmith and Traub calculate that the federal government is now spending $20.8 to $23.9 billion annually, overall, for the compensation of top private contractor executives.

Out of this sizeable stash of tax dollars, the pair estimates, $6.97 to $7.65 billion is going to private contractor executive pay that exceeds $230,700 a year.

In short, Hiltonsmith and Traub note, “we are bankrolling the paychecks of already-wealthy executives instead of supporting more livable wages for American workers struggling to get by.”

We could solve this problem, the two quickly add, quite simply — by lowering the top contractor pay reimbursement level from the current $763,039 to $230,700, the current vice-presidential payout.

Taking this course would save enough tax dollars, the new Demos research indicates, to give a $6 an hour raise to the 560,000 federal contractor workers who currently make $12 or less an hour. Legislation calling for this simple step, the Commonsense Contractor Compensation Act of 2013, is already pending before Congress.

But we could go even further to leverage the power of the public purse toward a more equal America. The CEOs of the biggest federal contractors, executives like Lockheed Martin CEO Robert Stevens, don’t take the bulk of their personal pay directly from the federal government. Their subsidy comes indirectly.

The alternative? The federal government could deny contracts — and corporate tax breaks as well — to companies that pay their top executives over 25 or 50 times the pay of their most typical workers. America’s corporations operated quite comfortably within this range from the 1950s through the early 1980s. The CEO-worker gap has ballooned since then to a 354-fold differential.

The federal government, we ought to keep in mind, already denies our tax dollars to companies with employment practices that discriminate on the basis of race or gender. We’ve decided, as a society, not to subsidize racial or gender inequality. Why should we subsidize economic inequality?

Previously published on otherwords.org and is republished here under a Creative Commons license.