Brooke Kroeger, author and journalism professor at NYU. Her latest book is THE SUFFRAGENTS: How Women Used Men to Get the Vote. It launches Sept. 1 as New York celebrates the centennial of the change in the state constitution—the referendum passed Nov. 6, 1917—that gave the women of the state the vote. For a 90-second version of the book, see the trailer. To get a sense of how advanced was the thinking of the thousands of members of the National Men's League for Woman Suffrage, read its national mission statement, first issued in 1912 and republished now as part of the thornwillow.com Broadside Library. The league included prominent, powerful men of every profession and every walk of life. 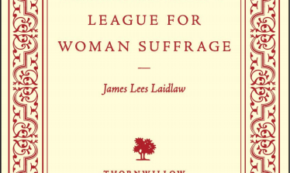 The 1912 mission statement of the National Men’s League for Woman Suffrage is a primer for any ally.