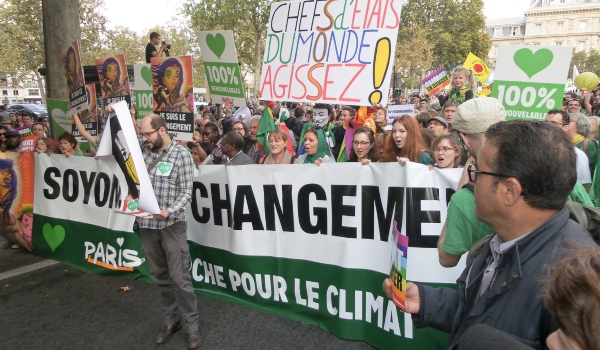 —
An estimated 7.6 million people joined the global climate strike September 20-27, making it the largest demonstration against climate change in the world’s history. There were more than six thousand events in 185 countries. 1.4 million participated in Germany; 1 million in Italy; 600,000 in Canada; 500,000 in the US; 350,000 in Australia; and 350,000 in the United Kingdom.

The strike was part of an on-going series organized by young people around the world. This time the youth asked adults to join them. A wide swath of U.S. unions were among those who answered the call.

On a Labor Network for Sustainability video call, unions from around the country reported back on their participation. Here are some of the highlights:

SEIU locals turned out members, provided financial support to student organizations, supported logistics and social media. Nationally, SEIU promoted the strike through a multi-day social media campaign including a solidarity video with SEIU International President Mary Kay Henry. SEIU Local 1 Member leader and veteran school janitor Erica Sanchez told a Chicago rally, “It’s the youth who are leading the way. For months, young people have been going on strike to demand climate action. And today, adults are joining them to build a multigenerational movement. I’m here not just for myself but for my daughter. She must be able to live in a safe, healthy world. Any further delay will deny our generation and future generations a livable, just future.”

Teachers American Federation of Teachers locals and members participated in the strikes in New York City, New Jersey, Washington, DC, San Francisco, and many other locations around the country. AFT President Randi Weingarten, who marched with AFT members from the United Federation of Teachers (New York City public schools), the Professional Staff Congress (City University of New York) and United University Professions (State University of New York) in New York City, sent a message to AFT members: “From students walking out in solidarity against gun violence, to young people marching for action on climate change across the world, we see powerful examples of what happens when young people take action for change.” For a report on educator participation from the AFT News: Global Climate Strike demonstrates mass movement to address climate change

The AFT local at Rutgers University along with other trade unionists, students, and community members organized a Central Jersey Climate Coalition that demanded Rutgers become carbon-neutral by 2030 – whereupon the president of the university appointed a committee to make a plan to be carbon-neutral by 2030 chaired by one of its advocates. The national AFT is now forming a climate working group.

The Massachusetts Teachers Association, associated with the National Education Association and the largest union in Massachusetts, passed a resolution supporting a strike for the Green New Deal and encouraging the National Education Association to do the same. It supported the student strike, recruited teachers to work with student strike groups, organized buses for high school and college students to attend strike events, and plans to continue working with youth climate strike organizers.

Massive wildfires, category 5 hurricanes, years long dought and unprecedented flooding, sea level rise, heat waves and crop failures, all exacerbated by the human created climate breakdown. This is a critical moment in human history. Global fossil fuel emissions from our use of oil, coal, and gas are still going up, driving our climate crisis further towards catastrophe. All around the world youth have been going on school strike to demand urgent climate action to protect their health, safety, lives and futures. Collective action and power may be our last and best chance.”

“We’re proud to support the climate strikes. It’s way past time for us to demand genuine solutions to a crisis that’s already wreaking havoc for so many people around the world, whether it’s in the form of extreme weather such as Hurricane Dorian or increased risk to workers from heat-related illnesses or critically endangered infrastructure in our communities.”

San Francisco Bay Area On September 20, 200 union members marched in the Labor Contingent, three miles through downtown San Francisco along with 40,000 other participants. Workers demanded that world leaders take immediate, bold action on climate change and to raise standards for working people. Spirited chants included “Green New Deal, Make it Real! Just Transition, that’s our mission!” and “One Job Should Be Enough, One Planet is All We Have.” Union members joined other Bay Area actions in Berkeley, Santa Rosa, Chico, and Sacramento.

This post was previously published on labor4sustainability.org and is republished here with permission.