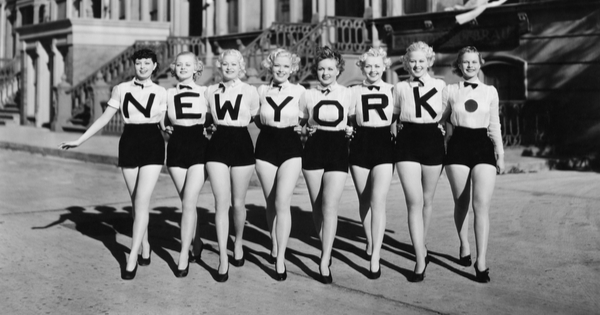 Why did we decide—both of us—to arrive in New York City in suits and ties?  In August, with the heat, and carrying each one big, heavy suitcase?  Sort of showing off, and I knew there was a way to pack a suit in a suitcase—(ha!  In a suitcase!)—but I didn’t know it, I pictured a wrinkled mess, I thought I needed all the pockets I could have to carry tickets, wallet, maps—

Or, simply because I didn’t know any better, I was too excited to calmly plan anything, nerved up, and wanted—if not to look, to feel dazzling.

Dazzling.  We didn’t think we could afford a taxi, we studied the street map and the subway map and if it looked close, and carrying a suitcase heavy with a week’s worth of clothes, shoes, shaving gear from Grand Central Station to the Park Sheraton Hotel—even just crossing the cavernous main room of the station was a workout.

Block after block, resting on corners, double-checking the map, Roger and I frustrated, sweating enough to drip from our ear lobes, and pleading for mercy when we finally reached the hotel lobby.

Dreaming of a shower and a bed to stretch out on, privacy and a shade across the window to blot out the noon sun.

Roger at the desk checking us in, tall, bald man working the counter, and suddenly—

“What do you mean we can’t?!?” I heard Roger’s voice barking, ready to fight—

Roger (or his mother) made our reservations, did they lose them?

Shoving our two suitcases closer to the counter, I hear the man say, “It is not the policy of this hotel to give two gentlemen a room with only one bed.”

The bald guy had an arch expression on his face, a poisonous smile, and recited his line like it was the first thing he told everybody.

What—why?  Waiting for Roger to figure it out?

Five minutes.  Finally I said we should just go to the airport and fly home.

Finally Roger wanted to know how much more a room with two beds was?

Did they have one?

Oh, yes.  (He must enjoy welcoming guests in this menacing way.)

Come on, only for more money, a way to get it out of us, because a room with two beds, who was going to check to see if we used two beds?  Or slept together in one?  And, what were they going to do about it if we did?

A flimsy, artificial morality that had completely sailed over Roger’s head, what the man was implying—  and a hotel lobby was not the place I was going to stand here explaining it to him.

So, paying more, even less we had to spend, our hundred-dollar-apiece budget shrinking fast.

After our run-in with the huge cockroach in Pleasantville?  While we were searching my cousin’s sister-in-law’s house for a drink?  All this week we never did get a drink (we were underage, NYC drinks are way overpriced) but Roger tried to sound sophisticated our second night in town, at the Night Owl Café in Greenwich Village.  Narrow, crowded, smoky place with live music banging away at the audience who seemed to be in a coma, one waitress (other end) and one smart aleck waiter (crazy from being overworked)—

Roger says, “Do you have expresso?”

“How much does it cost?”

“Ours is extra SLOW.”

“What?” the guy repeated.

To be fair, I could hardly hear, could barely breathe, both of us in suits and ties again trying to impress a room full of unshaven Beatniks, to blend in with the let-it-all-hang-out but motionless patrons.  I fared no better.  “What kind of pop do you have?” I asked.  I shouted a second time.

He smiled, ready to move away without my order.

“Yeah.”  And he did move away without answering.  Twenty minutes later he was back with a small paper cup of yeah.  No idea what it was.

But it was wet, and the waiter didn’t stay long enough to have me pay for it.

Two nights later we walked back thinking we’d go to China Town for dinner.  This time in Bermuda shorts.  Getting lost blocks beyond the café, seeing nothing that resembled a Chinese restaurant, turning back and loitering outside the place (we were hungry, we weren’t ready to face the café scene again).

And my heels were hurting.  Blisters forming, because I’d chosen tonight to wear my new Penny Loafers, to break them in (I thought), worn without socks (the cook way, I thought) and the distance from the hotel to here seemed twice as long as the trip before.

The long walk back, mostly on Park Avenue, but must have been more than a mile.  Block after city block, step down the curb, step up the curb, with blisters stinging, NO!  I took off my shoes and continued on barefoot.

Probably a law against going shoeless on the sidewalks of New York, filthy as they must be, but the pain was too much.

About halfway back though, I spotted a policeman in the middle of the next block.  Thinking, if he arrested me that would mean a ride.  Thinking and stopping to put on my shoes and knowing the officer must have already seen me barefoot, certainly saw me put back on my shoes.  Thinking OW!  This hurts worse, I’m limping going slow, making a face with every step—until the middle of the block after that, shoes off, so be it.

Somehow we got back to the hotel, up to your room, me collapsed on the bed (my bed, remember, my sheets, my blackened feet bottoms messing up nobody else’s).

“Unless you want to soak your feet first?”

And then he strips off his shirt and reveals—

He’s laughing about it.  “I’m not gonna get mugged—”

He’s been carrying his revolver, his Betsy all over New York?  Tucked in his belt, his shirt hanging out.

“Roger!  A concealed weapon?  If that cop had stopped us—!”

“Why?  We didn’t do anything wrong. I’m not gonna get mugged.”

“No—just arrested!  Or your head blown off!”

To Roger—somehow—this all made sense.