As reported by CNN, Andrew Luck’s retirement announcement is having a resounding impact within and outside of the NFL

On the one hand, we have:

– Andrew Luck fantasy football owners, who are angry because they will now score less points in a *game based on Luck’s actual life*.

– The #IndianapolisColts and their fans, who are angry because they will have to replace a talented player and will likely lose more football games.

– #NFL institutional shills, whose careers are based on pushing forward the notion that football is healthy and positive and that those positives far outweigh the physical injuries and mental toll this collision sports takes on its players. Including #CTE and #TBI.

These are the guys ignoring the well documented links between football and physical and mental health issues who march right ahead into questioning his toughness and dedication. (“Such a millennial!”).

– Toxic masculinity shills, who point push the notion that toughness = strength and masculine worth even when the cost is debilitating injury, harm to then men, and premature death. (“Pussy!” “Quitter!!”)

On the other hand, we have:

– Andrew Luck, a Stanford grad who – in his 6 NFL seasons- has torn his abdomen, torn rib cartilage, concussions, a torn labrum, a lacerated kidney, and a leg injury, and would like to preserve his physical and mental quality of life after football
/6

– His family and friends, who want to know and love him for the rest of his life, even if he’s not playing this game.

– People who are intelligent enough to see through the toxic masculinity and institutional @NFL bullshit & realize football is a *game* and life is much bigger than some game. And if you don’t, maybe turn off the NFL Network for a few minutes, and get a goddamned life.

‪So, Andrew Luck of the Colts announces his retirement and is booed by the fans as he walks off the field. Is this what #NFL fan culture is about? Kill yourself and keep killing yourself for our entertainment? Talk about the disposability of men. The #NFL seems to be ground zero for that. ‬

#AndrewLuck and other men playing in the #NFL are starting to resist the idea that they owe their bodies to the game. In part because of growing activism around the issue of concussions and brain trauma. We must honor and celebrate those decisions or we are contributing to a myth of male invulnerability that is killing our heroes. — Mark Greene 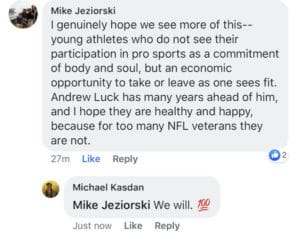 Facebook33Tweet4Pin1EmailShares38
wpDiscuz
Share this ArticleLike this article? Email it to a friend!
Email sent!