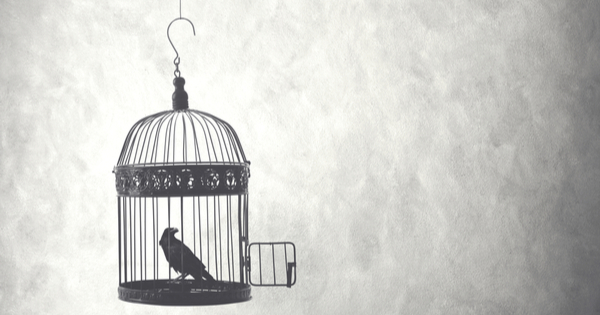 Some birds aren’t meant to be caged.

Have you ever seen the film, The Shawshank Redemption?

It is outstanding…one of my all-time favorite movies. Based on Stephen King’s novella, Rita Hayworth and the Shawshank Redemption, the 1994 film was written and directed by Frank Darabont and starred Morgan Freeman and Tim Robbins.

Tim Robbins’ character, Andy Dufrense, is an innocent man accused of murder and sentenced to life. The character played by Morgan Freeman is a seasoned lifer who takes Andy under his wing and teaches him the ropes of prison life.

I’ve seen the film many times over the years. What struck me most while watching it on a plane a couple of months ago was the scene where Andy locks a prison guard in the bathroom so he could play a record of two women singing opera—over the prison loudspeaker.

As we hear the hauntingly beautiful song and see the surprised (but clearly moved) reaction of various prisoners, the voiceover of Morgan Freeman’s character says:

I have no idea to this day what those two Italian ladies were singing about. Truth is…I don’t want to know. Some things are best left unsaid. I would like to think they were singing about something so beautiful it can’t be expressed in words… and makes you heart ache because of it. I tell ya, those voices soared…higher and farther than anybody in a grey place dares to dream. It was like some beautiful bird flapped into our drab little cage and made those walls dissolve away…and for the briefest of moments, every man at Shawshank felt free.

Andy paid dearly for his defiant stunt. But to him, it was worth it. The personal pain of his punishment was worth the gift of beautiful music—and the subsequent soaring of spirits—he was able to give the other prisoners…even if it was for just a few moments.

Andy hoped one day he would be free. But he eventually realized that freedom wasn’t going to come from getting out on parole. He had become far too valuable to the prison warden to be released through normal channels.

If you’re not familiar with the story, Andy didn’t serve his entire time in prison. He refused to. Instead, he planned his great escape and methodically worked—for decades—to make sure it went off without a hitch.

Andy never lost hope…he never gave up on his freedom. But he also never gave up on doing everything in his power to ensure that freedom came about. Over the years, although his life became more and more comfortable in prison, he never lied to himself that an okay life in prison was worth settling for. Freedom was his dream and he was prepared to do the work—day in and day out—to ensure that came about.

What prison cell—of your own making—might you need to be making an escape from?

Have you become a little too comfortable in a situation that is no longer good for you, or the ones you love? It takes tremendous courage to make a significant change in our lives. Yes, we can hope that things will get better. But we must also put in the effort to help ensure better comes about…even if that entails digging ourselves out of a current situation, one small swing of the rock-hammer at a time.