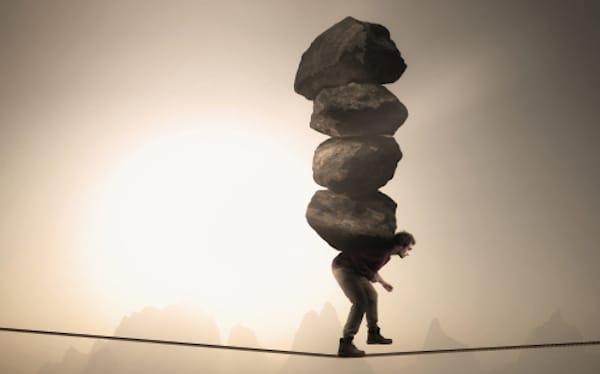 We might follow in someone’s footsteps. Or go off the beaten path, where something better could be waiting for us. When we do that, however, it’s more than a calculated risk or a snap decision. It’s a statement to let those around us know we want more than what we’ve found or have been provided.

It’s not always a measure of spite or revenge for things that may have gone wrong. Nor is it a constant bundle of negative feelings. It can be a release – a realization we don’t have the right to judge or place our burdens onto other people, especially those whom we treasure the most.

College helped me see there’s more to being gentle, kind and strong than meets the eye. I kept crossing paths with people who were nothing like me on the surface. Yet, there was still an instant, almost automatic feeling I had more in common with them than I did with anyone else I had met so far. We ended up taking many of the same classes together, so I was at ease asking for help when I needed it.

They took notes for me, held doors open and even walked me to my mom’s car after class every day. At the same time, however, they never assumed I always wanted or needed help. They knew there were certain things they had to do for me – like getting my books out of my bookbag – but they also quickly picked up on the things I could do on my own. I was extremely grateful they recognized the fact I needed personal space.

It was never a matter of, “If you scratch my back, I’ll scratch yours!’ It was always based on trust – and most importantly, mutual respect. I felt strangely comfortable around my new friends, and they felt comfortable around me as we continued to have classes together every semester. I knew they all had heavy burdens to bear.

I didn’t want to dig into that unless they were willing to share. In turn, I didn’t have to explain why I’m in a wheelchair. They rarely asked. When they did, however, it wasn’t because they saw something “wrong” with me. They asked out of genuine compassion and curiosity, which I appreciated even more. As our friendships grew, however, I didn’t want them to feel like they had to take care of me.

I didn’t want them to worry about helping me carry the burden of having a disability. My disability has always been my load to carry, and it wasn’t fair to put it on their shoulders. Or ask them to take on the responsibility. Nor did I want to make them feel like I was trying to get something from them by having them in my life. I don’t think they ever felt that way, but I still had a sense I had to avoid it at all costs.

I thought about that a lot because it was unfamiliar territory for me. I had waited too long to have these types of friends. I didn’t know if I would again, so I was going to keep them close – if they wanted me in their lives. I was so used to explaining the same part of my story to everyone I met, I didn’t know what it felt like to leave my disability out of any conversation. It got to the point where my newfound buddies would tell me, “I don’t want to hear about that.” – not because they didn’t care, but because they didn’t see my disability as a reason to stay by my side.

They had my back because they wanted to. They saw the full portrait of the fighter and writer the rest of the world was beginning to see. It was liberating to know I didn’t have to be defensive about my disability anymore – at least, not around these friends.

It wasn’t until one of them looked me in the eye and said, “You know, I’d switch places with you any time, Erin!” then I realized how incredibly fortunate I was to even know these people who were random strangers six months to a year before crossing paths in the first place.

It might take people a long time to see the beauty in something. They might not turn the corner at the same time everyone else does – but when they do, make it worth their time.

Facebook14Tweet1PinEmailShares15
wpDiscuz
Share this ArticleLike this article? Email it to a friend!
Email sent!