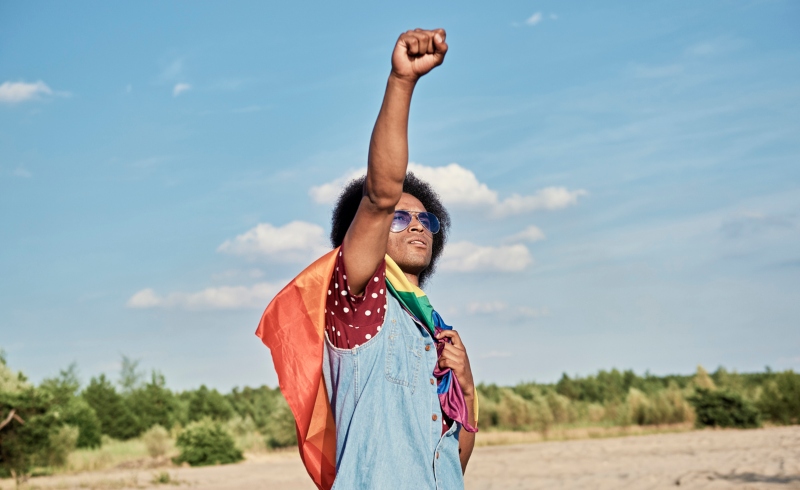 Many straight, cisgender people at the moment are really hesitant to use the word Queer in their everyday language. They seem to be associating the term solely with its derogatory history and usage. This caution is respected though, rather than a wild, unhinged vocalization lacking consideration of how the word is used.

When thinking about this recently, what came to mind is how many White people are also really hesitant to use the term Black in their terminology, as in the Black community or a Black person. Of course, there is no universal standard, just like with Queer. Though many Black people prefer and encourage White people to become comfortable with Black as an individual and collective term, there are also people who individually prefer to be referred to as African-American.

This evolution of identifying language seems to be quickly occurring across the marginalized board. Native American and Indigenous, Hispanic and Latinx, dismantling ableist terminology, and so forth. Human understanding, intention, and general knowledge are key. How people want to be identified — especially marginalized people — is up to them, or us: it depends on who’s reading this.

As stated, you do have to know how to use these terms. There’s a big difference between “A Queer person” and “A Queer.” The latter is much more likely to be an incorrect usage because it is not only negatively connotated but places an “othered” and dehumanizing veil on Queer people. As though I were an alien or the monster under your bed.

Another observation that comes to mind is the number of times I have seen politicians and news correspondents struggle to sputter-out “L-G-B-T-Q” on live television. The incidences I’ve seen have mainly been individuals who are genuinely uplifting in intention, so I’m not judging them for their momentary lapse. That’s just more of a reason to normalize terminologies like the Queer community and Queer people. Not with the intention to conform to heteronormative standards though. Straight, cisgender people do need to put in the work. Verbal LGBTQ, written LGBTQ+, Queer in both expressions, and more variations should be made more aware. As long as it’s inclusive, there isn’t one way to acknowledge Queer people.

I firmly believe that by destigmatizing and integrating “Queer” more into our language, it would help bring forward the fact that Queer issues are human rights issues about universal subjects; like sexuality and gender. Our community becomes less of an “othered” issue then because it takes the topic out of the heteronormative lens by acknowledging heteronormativity as a whole.

However, this is just my Queer view on it.

Dr. Nasser Mohamed, MD (He/Him) is a general medicine physician based in San Fransico, California. He identifies as a cisgender, Gay man. Nasser is also an immigrant and an asylum-seeker from Qatar. His country of origin, he emphasized, still punishes LGBTQ+ people with the death penalty simply for existing.

When I asked the doctor for his perspective on the word “Queer”, he stated the following:

“My take on the use of the term ‘Queer’ is unique. I care for patients that identify differently, while also an immigrant, with English as my second language; which I believe affects how I perceive the word.

I do believe that the use of the term is definitely mixed. More LGBTQ+ individuals are comfortable with it from my experience….‘out’ and comfortable with who they are. I suspect a person that grows up in a different society, that hears the term used explicitly for derogatory purposes and has been bullied for it may have a different take. It comes down to the context and the associations individuals make with that term.

This brings me to my second point.

It is fairly common knowledge that bilingual individuals experience words differently. For example, the word ‘love’ can trigger a completely different feeling for me when I hear it in Arabic versus my second language…. This has to do with early development and how our brains make neural connections related to emotions as we are learning our first language. This, for example, is a common strategy used in trauma therapy for bilingual individuals. Conducting the therapy and talking about events in a second language does not trigger an equally strong emotional reaction.

‘Queer’ is merely a word to me that I get to form new feelings around. I did not grow up with this term in [my first] language, to have built-in emotion [towards it], as well as [a] cultural reaction to it. I am very comfortable referring to myself as Queer. To me, the term signifies a bigger community, pride, and unapologetic visibility. I am proud to be Queer.

I am, however, very sensitive and aware that my journey may be different from others and I avoid making assumptions about what individuals prefer. Asking never hurts. Clarifying intentions never hurts either.”

Nasser’s intersectional experience alone brings forward an immense amount of insight on this multi-layered subject; a subject some could have thought to have already been widdled down.

Queer from this lens is a deeply intertwined, left and right brain discussion. Not only is the idea of lived existence individually shaping an already inherent sense of identity, but Queerness as a neurological standing, simultaneously existing. Both shared, yet differently present. No snowflake is alike, yet they all share the commonality of being a snowflake. Pardon the analogy, somehow “snowflake” has become a derogatory, political term as well, only furthering the point of this article.

In terms of categorization, the word “Queer” is what we consider a reclaimed word. As defined by the LGBTQ+ educational nonprofit GLSEN, reclaimed words as the following:

As language evolves, some individuals and communities choose to identify with terms that had previously been used as slurs against them. The words are “reclaimed” and given new meaning, often imbued with a sense of pride and resilience. Examples include, ‘queer,’ ‘dyke,’ and ‘tranny,’ among others. It’s important to remember that identity is unique to each individual; not all members of a community readily accept the use of reclaimed words, as they may still find them offensive and hurtful.

The “Q” intentionally lowercase, as the use of the word when describing our community, or as an individual label, is different from its use with a derogatory intention, or simply as an adjective.

Weston Brown (He/Him), a Marketing Lead who holds a many task-encompassing role involving brand management, gave his perspective on “Queer” as well:

“Our language is always evolving and the word ‘Queer’ certainly is no exception. It has been used in a painful derogatory way, but in more recent years has been lovingly reclaimed by many.

Professionally, I’ve seen a strong tendency to LGBTQ+ as it is a bit more sterile and has fewer negative connotations attached. As someone who works in marketing, I like to use the term Queer as appropriate in hopes to create a warm, inviting, inclusive message.”

Like mentioned, I personally hold the same perspective towards Queerness as Weston does. In general, and with myself. Queer gets at the root of who we are as a people. However, I fully understand that this sentence alone needs to be unpacked for many people.

I also really connect with Weston’s reference of a “Queer family.” He could indirectly mean literal, biological LGBTQ+ family members, but what this is immediately implying is the idea of a “chosen family.” These are loved ones in your life that you consider family-like bonds but are not blood-related to you. For many LGBTQ+ people, these are other Queer people and allies that either “replace” individuals who are unaccepting of or even harmful towards Queer existence, and/or are additional people of support who understand and uplift who you truly are.

Natalie Clifford Barney, a 19th-20th century U.S. playwright was quoted to have said, “My Queerness is not a vice, is not deliberate, and harms no one.” Though I’m unsure if the word Queer back then was used as it is today, or if it was even a mainstream term since its homosexual and gender nonbinary association came about in the early 1900s, it’s evident she is referring to her sense of individual belonging to the LGBTQ+ community. This is also clear as Queer themes are overt in her work. Her quote is also an aspect of Queerness to reflect on in general, and towards the connotations associated with “Queer.”

Discussions like these need to occur. Unpacking marginalized topics like these only promotes a broader understanding of Queer, LGBTQ+ lives and the issues that touch us. An additional benefit, besides mental stimulation, is that it’s simply a cathartic experience for many Queer people to partake in.

I currently have under review by a peer-reviewed journal for publication, a research study about today’s most pressing Queer issues here in the U.S., and the levels of support they are receiving by political groups that have been antagonists towards Queer rights for so long. In the first paragraph, I state in reference to the Queer community, “….what does systemic harm to this continuously oppressed group of people is to not acknowledge their existence at all.”

Talking deeply about matters like these, deciphering meaning and different types of expression validates Queer topics that not only have been demonized but have also been kept in the dark for so long.

As Queer, LGBTQ+ people, we exist regardless of hetero, cisgender recognition. The uplifting of who we are cannot occur without acknowledgment. Though we have much more work to do, both in general and within the community we belong to, it shows how far we have come when we are able to write and discuss Queer specificities.

Where do I even start? The first thing that comes to mind when writing this is Tinder, or Hinge, or Bumble. The idea of taking a biography or a memoir and making it even more condensed seems diminishing. Maybe I’m just arrogant.
However, I also find this task to be necessary. Introductions are just that; introductions. This isn’t meant to be lengthy and that’s ok. It’s not like what I write here will be the only identifiers considered about me. I’m in my second paragraph and I haven’t even said anything about myself yet.
My name is Max Micallef (They/He/She), and I’m a proud Queer and Genderqueer identifying person. I’m a Queer rights activist, writer, and researcher here in New York State and beyond. I’m also a proud political progressive/Democratic Socialist and continue to hold multiple different political and governmental roles. I currently serve as the Public Policy Coordinator & Community Liaison with GLSEN Lower Hudson Valley. …

FacebookTweetPinEmailShares64
wpDiscuz
0
0
Would love your thoughts, please comment.x
()
x
| Reply
Share this ArticleLike this article? Email it to a friend!
Email sent!