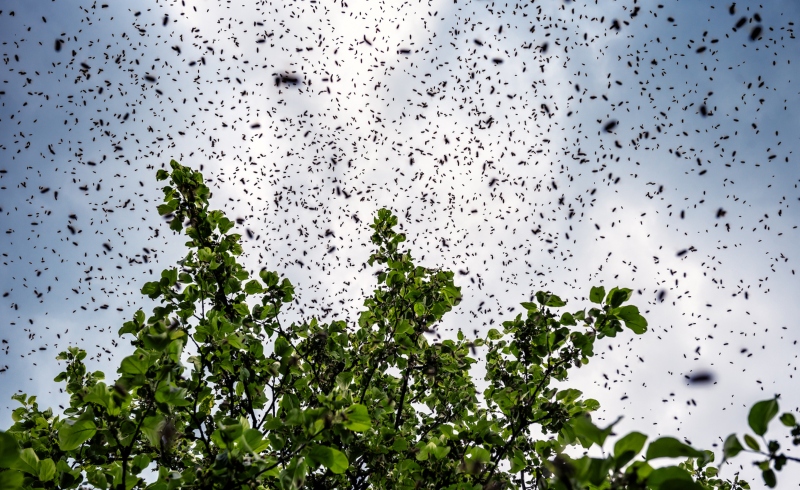 Revelations that insect species are in trouble are not new. But now comes news that the problem may be much more widespread. Even common insects in Germany could be at risk.

Wildlife biologists are prepared for the disappearance of rare species – which may have adapted to exploit precarious environments – but the news that species always considered widespread if not ubiquitous are also in jeopardy is troubling.

The news follows a revelation from a German research team late last year that the sheer mass of flying insects had declined by as much as 75% in the last three decades, once again in Germany.

And although the researchers don’t blame global warming – habitat destruction and changes in land use are enough to explain much of the disappearance – the steady rise in temperatures is seen as the only explanation for a separate finding: beetles in British Columbia have dwindled in size as the thermometer has crept up.

Each study is concerned with one geographical region. Human pressure and changing agricultural practice is much the same across the entire developed world, and global warming is just that: global.

So there is a likelihood that other research teams will find much the same evidence in other places. Insects matter: they represent the largest animal group on Earth; they feed on insect pests, they are themselves food for birds; and they pollinate plants, both wild and farmed, and entomologists have been watching their response to change.

Two German scientists report in the journal Conservation Biology
that they believe the genetic diversity even of frequently-observed butterfly species could decline sharply in future. And because this diversity is the source of species’ resilience to change, their studied animals could then become even more sensitive to environmental shifts.

“Until now, we assumed that it is primarily the specialists among the insects, i.e., animals that depend on a specific habitat, that are threatened with extinction,” said Thomas Schmitt, director of the Senckenberg German Entomological Institute in Müncheberg.

“In our recent study, we were able to show that even so-called ‘ubiquitous species’ will be facing massive threats in the future.”

And his co-author Jan Christan Habel of the Technical University of Munich said that widespread species carried a much more diverse “gene pool” than those adapted to one confined ecosystem.

“Once these animals – due to the fragmentation of their habitats – lose the opportunity to maintain this genetic diversity by means of exchange, they will no longer be able to adapt to the changing environmental conditions of the future.”

European scientists have been watching insect populations for decades: they have measured butterfly loss in response to the kind of weather extremes likely to accompany climate change; they have even observed a shift in insect colour patterns with the longer summers.

They expect some species to benefit from change while others may lose out, but they have also repeatedly warned that climate change puts entire ecosystems in peril.

Zoologists have known for a century of a link between temperature and body size: animals in colder climates gain an advantage from being big. Those that need to lose body heat gain from being smaller.

But students and museum curators in Canada may be among the first to identify a shift in body-size in insects as a response to recent climate change.

They report in the Journal of Animal Ecology that they selected eight species of beetle from two sites in British Columbia and photographed more than 6500 individual specimens caught over the last century and preserved in a natural history collection.

They also reared 22 species of beetles in laboratory conditions over a range of autumn temperatures that matched the changes recorded in those sites. One of them, Okanagan, has seen a 2.25°C increase in the last 45 years. And in those 45 years, the four largest beetles had dwindled by 20% in average size.

“This research provides evidence that climate change is affecting even the smallest organisms out there,” said Michelle Tseng, a botanist and zoologist at the University of British Columbia.

“When these organisms were collected, I don’t think anyone ever thought that they were collecting them so we could monitor how they are changing. Museum collections contain more biodiversity now than will ever be collected again.

“It’s incredible that the diversity of collections in museums can help us understand and predict how organisms might change in the future.” – Climate News Network