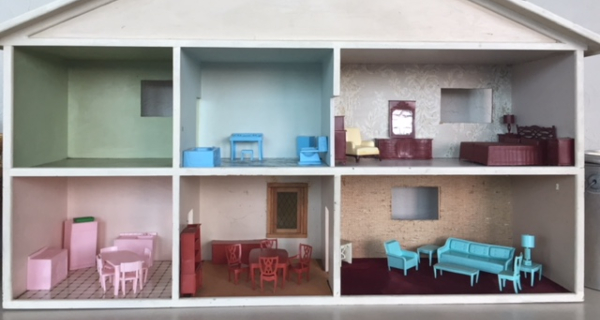 When I was five years old my Dad built me my first house. It was a six-bedroom, two-story structure, with a shingled roof, and enclosed attic. No garage or fenced yard, but I didn’t care, when I entered that house I was in my own universe.

It was a beautiful three 3′ by 2′ dollhouse, made of wood, and sheer ingenuity. I was completely charmed. My Dad was in his late twenties at the time, just bought his first grownup home, he had two little girls and no money for Christmas which was fast approaching.

The dollhouse has been stashed in my sister’s attic for a couple of decades, gathering dust, and lonely I presume. Yes, I attach humanistic features to inanimate objects, it’s a minor complication, you’ll have to deal with.

After Mom passed, Nancy and I both went on a decluttering spree, let’s just say it’s a work in progress, but I’m pretty sure we were removed from the hoarders watch list. So there’s that. I assume our little house is quite alarmed by all the changes in the world, including the little girls, now women, who still want to playhouse.

Due to the fact that Mom and Dad were broke the year, they built the dollhouse they decided to decorate the rooms with scrapes of wall paper and extra paint from their own home. For example, the wallpaper in the dollhouse master bedroom is the same paper that Mom put up in their master bedroom on Strawberry Park Drive. I assume that paper has been long removed, or painted over many a time in the last fifty years, but seeing it on the walls of the dollhouse sort of slammed me back in time.

I remember taking naps with my mom but she was the only one who slept. I spent the entire hour staring at the wallpaper, pretending I was imprisoned, or the bed was a ship, and I was headed to foreign lands. I had quite an imagination as a kid, and yes, it got me into a lot of trouble as a teen, but that’s another blog.

For the last several days I have been lost to nostalgia as I escaped to the lake house alone with my dusty mansion packed in the back of the car. Larry made plans with college friends so I decided to venture out on my own. Brave I am.

I spent the day soaking the plastic furniture in warm sudsy water and painstakingly wiping down the floors, walls, and rooftop. It’s as solid as the day Nancy and I found it under the Christmas tree more than fifty years ago. I asked my Dad, after closely inspecting the fireplace, how the hell (I probably didn’t cuss at the time) did Santa get my house down the chimney?

As I run my hand carefully over the structure, I can almost see my Dad standing at his workbench in the garage, tediously measuring, and fitting the many tiny pieces together. This was not a kit. It was his design, his architecture, his vision for his little girls on Christmas morning. A most precious gift in my opinion.

I can only imagine how excited my Mom and Dad must have been as the house was coming together. Mom ordered a set of retro (I assume it was modern at the time) plastic furniture that included pieces for the bedroom, kitchen, living room, bathroom, and piano room (but we lost the piano along the way). My sister added a glass window at some point in time, but she could only afford one, so the rest remain unadorned.

“Building a dollhouse is a lot like writing a novel because you are God of the Universe.” Jill McCorkle

It occurs to me how we physically manifest that which is most important to us. My parents worked hard to provide a home for me and my sister (this included love, safety, boundaries, necessities, and space to grow). They were quite the team. I can only imagine how they must have enjoyed creating this miniature version of home for us. I don’t believe I understood the importance of their gesture at the time, but now that I’ve come full circle, I’m deeply touched by this affirmation.

How defeating life must seem when it is impossible to evince your dreams?

I was always a character in my dollhouse. My Mom had ordered dolls to match the structure of our family. When I played with the house I could pretend I was Shirley Temple the movie star, or one of the Von Trapp children, singing my way across Austria. I would totally lose myself in this tiny house, live in my imagination, ordering my world with the omnipotence of God. “I could be whatever I wanted to be,” I totally kyped that from Rodgers and Hammerstein’s Cinderella.

Gently vacuuming the maroon living room carpet, I was totally relieved it didn’t disintegrate, in fact it came out beautifully. I could sense the joy radiating off my little house as I fussed and fawned over the placement of each piece. I do not claim to be an interior decorator but before I could stop myself I realized I was playing house. As 2018 began to fade from my awareness, I entered a time warp, and landed in my childhood.

I almost understood the appeal of the movie Downsizing when Matt Damon’s character undergoes a miniaturizing procedure after facing financial crisis in this recent blockbuster. The author, Alexander Payne, tends to use Joseph Campbell’s Hero’s Journey concept in most of his screenplays, the male characters face some sort of crisis, go on a journey, encounter a challenge, and somehow return with a new sense of priorities or direction. I have to believe a woman could have done so much more with the concept.

Joseph Campbell did not believe that women could have a hero’s journey, their work was in the home, a domestic calling of sorts. But I believe it part of the human condition, especially for women, and it continues throughout our lives. A dollhouse can germinate the feminine hero by allowing for impossible outcomes and extraordinary solutions before a challenge is actually encountered. Joseph Chilton Pearce says, “play is the only way the highest intelligence of humankind can unfold.”

My recent challenge was my Mom’s health crisis, it was indeed a journey, with myriad of assorted issues, and unexpected outcomes. To have come across this little house at this point in time is so fitting. It draws me back to my youth and my fascination for putting things in order. Martin Buber says, “play is the exultation of the possible.”

At first, I thought I would order a bunch of new furniture, detailed miniatures, made of real wood, glass mirrors, and drawers that opened. But as I set the plastic pieces in the house my parents purchased more than fifty years ago I realized I wanted to preserve the look from my childhood. I’m selfish that way and as a bonus they are indestructible. I went right to Etsy and ordered some fill in pieces that match the style and era. I admit I’m a little overexcited by it all. Larry is completely baffled by my purchases. Win.

Historically dollhouses were built for pedagogy and display. They were used to teach servants and children (girls) how to run a house or a way to display wealth. Faith Eaton says, “the German word dockenhaus means ‘miniature house’ not dollhouse.” It was after the industrial revolution when these miniature houses could be mass-produced that they were used as toys. Most of the young girls in my time had a dollhouse and I find this historical perspective at odds with my memory of playing house solely for fanciful purposes.

The dollhouse became a place where I could use my imagination, a place of emotional freedom, and exploration. If my life wasn’t what I hoped it would be I could redesign it in my miniature house. My dollhouse family always had a dog because my real Mom was not a fan of dogs or dog hair. The dollhouse might have been a vehicle of escape, but it was safe, because my hand modulated all the circumstances. Jodi Picoult notes, “We live in our grown-up dollhouses completely unaware that, at any moment, a hand might come in and change around everything we’ve become accustomed to.” Ain’t that the truth.

Now that I have the lake house all to myself, I crank up the music, wander over to my little house, and play. I move the stove around the kitchen until I’m satisfied with the placement, fold a piece of foil into the plastic mirror, I admit the spacing of the chairs in the living room is a work in progress. I believe it needs a fireplace and a new family. But it’s the empty room in the upper left-hand corner that wrestles with my imagination. In and through this play I leave the world behind and come closer to myself than I have in a very long time.

Notes to self: Everyone knows this dollhouse is not for the grandkids. Right? It’s for me.

I might be playing house but I’m still Living in the Gap. Join me in the comments and we’ll rearrange some words.

This post was previously published on CheryLoreglia and is republished here with permission from the author.