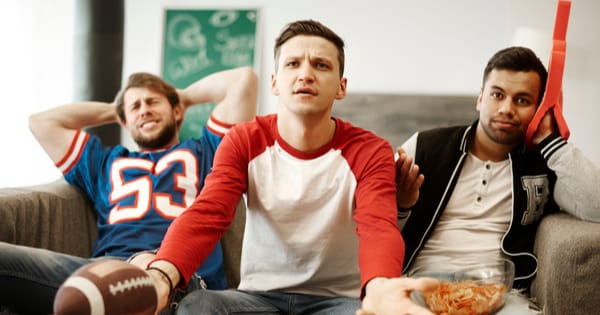 As a man who prides himself on eschewing violent, hyper-masculine pastimes, I still find it very difficult to give up watching professional football, especially once the playoffs begin. I promise myself and those around me that each and every game I witness will be my last—but this is never to be. The very best I can do is wean myself off the sport, skipping a Sunday here and there. I can’t seem to go cold turkey.

I have tried to kick the habit for at least the past six seasons because is has become almost a form of sadism to watch NFL games. The grotesque number and nature of injuries have forced the league to respond by changing certain rules with the goal of protecting players, particularly those who are most vulnerable. Even though I think the full-contact nature of football is what makes it more exciting than any other team sport, I still cringe when I see a player drop like a sack of potatoes after a jarring helmet-to-helmet blow to the head. Hits like these and countless smaller ones seem to inevitably lead to chronic traumatic encephalopathy (CTE), whose affects are not only debilitating but destructive. The discovery of CTE and the NFL’s attempts to downplay its affects were the subject of the 2015 film Concussion, which caused me no small amount of trauma when I learned for the first time that retired players were committing suicide by shooting themselves in the chest so that their CTE-infected brains could be studied. Not long after came the deeply tragic (and violent) saga of Aaron Hernandez.

And this is only tangential to the NFL’s domestic violence problem. I wrote previously about the bizarre fact that three players wearing the same number (27) had their careers cut short due to high-profile acts of violence against women in only a ten-year span. One of those players would be the starting halfback of the Kansas City Chiefs, the NFL’s top-seeded playoff team, if he had not decided to push and kick a 19-year-old in the hallway of a hotel.

I would be remiss, of course, if I did not mention Colin Kaepernick, who went from hated rival to my favorite (current) athlete for his willingness to stand up by kneeling down. Although the NFL eventually backed down on its counterproductive, Trump-inspired attempt to ban kneeling during the national anthem, its track record of supporting progressive causes and the players who promote them—from gay rights to Black Lives Matter—is uninspiring to say the least. What’s more is that the NFL continues to retaliate against Kaepernick personally by effectively blackballing him from the league.

What’s most puzzling (and appalling) is the extent to which I’m able to (narrow-mindedly) identify with losses suffered by my home team—given this context. Even the euphoria that results from a miraculous win doesn’t seem to balance out the losses. My feelings of anger and disgust only lead to stronger feelings of shame at being so juvenile as to become so affected by the failures of an organization whose players, coaches, and front-office personnel have no personal connection to me whatsoever. I don’t bet or brag, so why should I care who wins and who loses?

I used to equate the practice of fanatically supporting a particular sports franchise with nationalism, but  now I don’t think it’s the best analogy because nationalism has gotten people far more than even the New England Patriots, with five Super Bowl wins and an undefeated regular season since 2002, have given the people of Massachusetts. If the Patriots won every single game they played, they still wouldn’t give their fans much more than the privilege to cheer and boast ad infinitum. I think it’s clear that nationalism, while capable of causing a lot more harm than an occasional beer-soaked riot in its low moments, has provided far more tangible benefits for the masses.

My old friend and radical sportswriter Dave Zirin has gone to great lengths to make sports relevant in the context of our daily reality from a (progressive) political standpoint. He has offered up compelling arguments for applauding the athletes for their heroics while rejecting the sporting world’s tendency to objectify women, promote militarism, encourage greed and frivolity, institutionalize racism, and keep us distracted from pretty much every important social, political, or economic cause of the day. Of course, on that last point he would be quick to point out that the sports arena is but a microcosm of the larger political arena, where the same struggles are fought with different rules and boundaries. He would cite the “Los Suns” 2010 show of solidarity with immigrants after the passage of Arizona’s notorious anti-being-in-the-state-while-brown bill and probably throw in an historic zinger like the 1968 Black Power salute on the Olympic pedestals. Indeed, he is correct in his assessment about the political nature of sports.

However, the question remains: how can someone who is socially and politically conscious care so much about the result of some stupid game?

I can only guess that the football field is somehow analogous to my reality. My inability to accept devastating losses—not to mention societal ills—is indicative of a strong preference for a life of ease, where great plays and great luck come when they are most needed, and everything is always under control. I project on my favored athletes and performers my own fears of failure, injustice, and inadequacy, and the more I observe junk news programs and grocery-line tabloids monitoring some airhead celebrity’s every move proves I’m not alone. We have in this country an epidemic of vicarious living. But for me, it ends now—or, at least, after the Super Bowl.