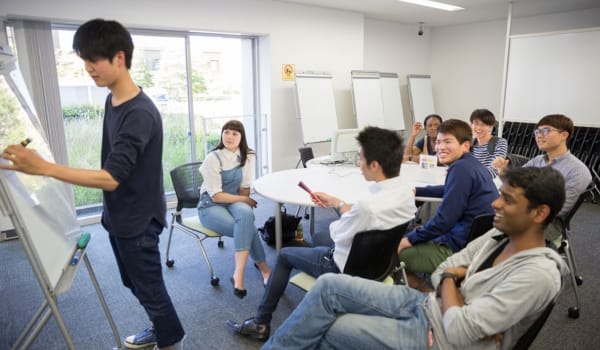 —
As the process of globalisation continues to interconnect the Earth’s people, the ability to communicate effectively has become integral to the development of partnerships and relationships all over the world. Toward such means and ends, the teaching of English – as the defacto lingua franca – has become paramount. In Japan, Hiroshima University (HU) is at the forefront of global education and language learning. Research Outreach connected with Professor Hajime Nishitani, to see how he is equipping HU students not only with English language proficiency, but the competencies to become engaged global citizens.

The English language is the closest thing to a global language experienced so far in human history. Whilst it was arguably Britain’s imperial and industrial colonisation that spread and institutionalised English across the world between the 17th and 20th centuries, it has been the dominance of American culture and economics in the last century that has consolidated this trend (Mastin, 2011). There are an estimated 360 million native English speakers in the world and 1.5 billion speakers in total. It is the most commonly studied foreign language globally (Lyons, 2017). In the fields of science, business, medicine, education, research, politics and entertainment, many would argue that English has become the undisputed lingua franca. What does this mean for countries where English is not the first language? It means that English-language acquisition is critical for those wanting to travel, work, and live internationally.

Teaching, assessing, and grading English language skills has, therefore, become the focus of education centres, institutions, governments, and businesses across the globe. Being able to measure and demonstrate competency in English is increasingly key to success at home and abroad, and a large number of tests, examinations, and grading systems have been developed to meet this demand. Some of the most well-known include the International English Language Testing System (IELTS), Test of English as a Foreign Language (TOEFL), Global Test of English Communication (GTEC), Teaching of English for Academic Purposes (TEAP), and Test of English for International Communication (TOEIC). The results and qualifications from tests such as these are used for multiple purposes, from meeting eligibility requirements for entry into educational programs to selection criteria for the assumption of professional employment.

“English-language acquisition is critical
for those wanting to travel, work, and live internationally.”

In Japan, the teaching and assessment of people’s English-language competency has become as important as anywhere else where English is not the first language. At the forefront of the drive for the education, testing, and evidencing of English-language skills is Professor Hajime Nishitani, Professor of Law at Hiroshima University, where he also serves as Vice Executive for the Top Global University Project. Professor Nishitani has been working with internationally renowned experts on the assessment of international education and is currently exploring mediators and moderators of English language acquisition and the relative impact of study abroad programmes on students’ language proficiency. By carrying out quantitative and qualitative research into English-language competency across the university faculties, Professor Nishitani hopes to be able to identify where the global education structure is failing students, which learning programmes are most successful, and why some students score better than others overall in testing, all with the aim of improving students’ chances of success.

Since 2008, Hiroshima University has used the TOEIC Institutional Program (IP) Test to assess the English proficiency (both listening and reading) of all students. Entrance examination scores are used by the university to create target score graphs in order to allow a comparison of each student’s ability at enrolment and throughout their studies. It has been noted in the last few years, however, that students’ language skills are not improving as hoped, with some students actually receiving lower scores a year after their studies have begun. A wide variation of scores between faculties and departments has also been recorded, with some score patterns repeating over more than one year, indicating potential worrying downward trends. Professor Nishitani’s research specifically aims to understand why and how these scores are occurring, whether the CEFR is too broad a framework and what might be done to improve the TOEIC IP scores of Hiroshima University students. 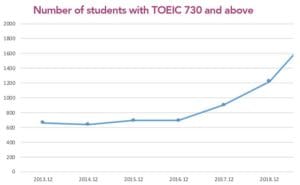 “Nishitani believes that the key is in treating all students as individuals and tailoring their English-language education according to their differences.”

In order to clarify which kind of students were improving while others were not and why, Professor Nishitani uses a grounded theory and mixed methods assessment measure called the Beliefs, Events, and Values Inventory or BEVI (Shealy, 2016). The BEVI is a powerful analytical tool that can show the capacity of an individual student’s interest toward “sociocultural openness” and “global resonance” among other aspects of how individuals experience self, others, and the larger world. Using BEVI scales, Professor Nishitani was able to survey nearly 2,400 individual students, drawing lines and reading relationships between various factors including a student’s psychological characteristics, department, faculty, gender, type of educational programme and English proficiency. Analysis of the survey data showed that a “one size fits all” method of educating and testing students with regards to their English-language skills is not universally effective and may in fact be counterproductive. 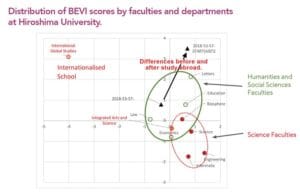 For Professor Nishitani’s study, “openness to experiences” is defined by scales and scores such as being high in global resonance and sociocultural openness, and low in gender traditionalism and basic determinism (for more information about the meaning and type of BEVI scales, see www.thebevi.com). Results from the survey showed that each student’s psychological characteristics and motivations as measured by the BEVI were both distinct as well as related to their English language proficiency score. For example, students studying humanities and social studies showed a higher level of openness to new experiences compared with those studying science, technology, engineering, or medical majors. There were other differences as well. For example, at the level of gender, female medical students were more open to new experiences than male medical students, with the opposite trend apparent in pharmaceutical studies. Perhaps not surprisingly, the results also showed that, almost universally, cultural openness increased following study abroad programme experiences in both English and non-English speaking countries, compared with levels measured before the visit. Finally, and perhaps most importantly, the results confirmed that the students who scored highly in English proficiency testing showed a higher interest in the outside world and global engagement in general.

So how can the results of this survey prove helpful in reversing a trend of static or worsening English proficiency scores at Hiroshima University and beyond? On the basis of such results, Professor Nishitani believes that the key is in treating all students as individuals and tailoring their English-language education according to their differences. As such, the university is now focusing on assigning each student their own specific English-language standard / expectation based upon their individual motivations and interests. By employing this “expectation approach” as well as regularly looking for elements to change and enhance student motivation towards English-language education and global activities, the university is aiming to augment the English-language learning of all students. This kind of evidence-based policy making following institutional research should lead overall to wider cultural openness, more effective global education, and better English-language skills test scores, setting students up to enter the world of business or research in as well-equipped a manner as possible.

In a world in which international travel, business, and education seem set to continue to increase in significance and in which the English language is the most common medium of communication, it is vital that non-English speaking countries find the best ways to educate and test young people in English. Educators and institutions represent a particular opportunity and hold a particular responsibility to act as mediators and moderators of English language acquisition in countries like Japan, and in the case of Hiroshima University, they have certainly stepped up to the plate. In fact, Professor Nishitani’s research, results, and the following educational measures have already caused a stir, and together with the creator of the BEVI, Professor Craig Shealy, he has been invited to give a workshop on the topic by the American Council on Education and in other venues. Whilst the world grows smaller and globalisation continues to shape our lives, it seems safe to assume that it is those who are most globally competent and open to new experiences who will be the ones who survive and prosper.

What will your workshop on this topic focus on and what do you hope to teach others about global education and English-language learning?
BEVI is adopted as a tool to measure collaborative online international learning (COIL). And I/we are going to give seminars this weekend and also next weekend.
This weekend: Assessing Student Learning through COIL Virtual Exchanges: Overview of the BEVI. Next weekend: Understanding Students’ Transformational Learning.

This post was previously published on Researchoutreach.org and is republished under a Creative Commons license.
—

Facebook18Tweet2PinEmail1Shares21
wpDiscuz
0
0
Would love your thoughts, please comment.x
()
x
| Reply
Share this ArticleLike this article? Email it to a friend!
Email sent!