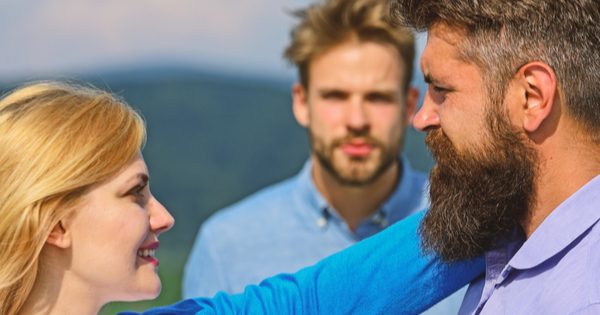 When your wife leaves you, you think and feel a bunch of different things, and most are very bad.

I felt like dying most of the time at the first, and what’s most interesting about that to me today is when I think about what things made up what percentage of my Felt Like Dying pie chart.

First, I felt abandoned. Then, I felt lonely. A house that always had three people in it, was now only me when my little preschooler wasn’t there. But even when he was there, everything felt different—everything felt wrong. Radical, sudden life changes always feel like that.

Second, I felt fear. I was afraid of something bad happening to my son and/or his mother and not being there to help. I was afraid of being alone and involuntarily celibate for the rest of my life. I was afraid of my wife being with other men—both the healthy concerned kind, and the jealous insecure kind. And more legitimately, I was afraid of no longer having any influence or control of any kind over who my son would be exposed to the 50 percent of the time that he wasn’t home with me.

It wasn’t long after she had moved out that I’d discovered she had spent the night with a man. My little boy innocently told me about it because he wanted to know whether I liked playing with mommy’s new friend’s dog as much as he did.

If you’re guessing that I freaked the eff out big-time, you’re an excellent guesser.

I also learned that he wasn’t a good person. Like, he was a con artist lying piece of entitled shit who was still married even though my ex didn’t know it. He was a TV/movie villain personified.

I wanted him dead, and I’ve never (I promise!) wished that on another human being before or since. I didn’t want him murdered. I just wanted him to die in a freak fiery explosion while everyone else was standing at a safe distance. I was insanely jealous that this man was touching my wife and spending time with my son. I was furious with my ex for what I perceived through my woe-is-me divorced glasses to be such poor judgment. But I was ALSO still very protective of her. Even though the devil on my left shoulder wanted to strangle her, she was still the woman I loved and chose above all others. I’ll be damned if this is the guy that gets to be with my wife and help raise my son.

My ex ended it with him the day before our divorce was legally finalized. She cried and hugged me outside of the courtroom about 10 minutes before we mutually agreed to part ways forever.

It had been four and a half months since she’d moved out and up to that point, I’d never felt closer to her or more at peace than I felt on the day the State of Ohio officially agreed—we were no longer husband and wife.

My parents divorced when I was 4. It was almost as shitty as the time I did the same thing to my four-year-old.

When I was 5, I met a guy who was friends with my mom. He brought me M&Ms, cool football stuff, and always invited me to watch sports with him. After enough years, some of my friends would call him my dad, and I stopped correcting them. He never got to replace my father who was my childhood hero living hundreds of miles away, and who I only got to see on school breaks. But if you want to call him my dad, you go right ahead. He’s a good man.

Dude loved me. Took me under his wing. Paid for much of my childhood. Taught me a bunch of stuff. Always invited me to do whatever he was doing. And never was a dick to me unless it was to come to the defense of my mother when I was being a dick to her.

As soon as I hang up the phone with my dad on Father’s Day, I’ll hit the button to call my stepdad and wish him the same. He’s the first person to teach me—through actions, not words—that the criteria for family is less about blood and genetics, and more about who earns the spot in our minds and hearts by showing up.

My wife didn’t end our marriage and run into some other dude’s arms because she’s inherently selfish and chose herself over our family.

I, it turns out, was a shitty husband—but I just hadn’t figured it out yet. I thought because I was a pretty good guy, that it automatically made me a good husband, but I later discovered that’s not how it works. Good character and a pleasant temperament are fine human traits. Commendable, even. But they do NOT automatically make you a quality spouse.

Similarly, very good men can be very bad husbands. I don’t know that I was a “very good man.” Probably not. But I was for sure a shitty husband, and once you figure out WHY your wife chose to leave you, it’s much easier to make peace with it.

But there’s still that little boy who isn’t so little anymore. He just turned 11 and will start sixth grade in the fall.

I’m so proud of him, it’s almost gross. Like I’m one of those parents who compliments their kid too much, so he’s probably going to be knocked down a peg or two by real life in the near future and we’ll have some important talks about the relative fairness of life. (There isn’t any, and it’s a brutal lesson for innocent people to learn.)

After my parents divorced when I was 4, and after his parents divorced when he was 4, I feel as if it’s my job to prepare him for the realities of interpersonal adult relationships—namely romantic ones—and help him SEE all of the things I was blind to, and that so many young people are blind to, when they are dating and marrying in their teens and twenties.

That’s what I have to give. To help this child learn the lessons I’ve paid for in tears, vomit, depression, and shame, so that whoever he chooses to love one day won’t be another unwitting victim of a good person totally blind to their own capacity for inflicting mental and emotional anguish on others.

It’s my most important job.

I vow to do my best.

Confession: I still feel this bizarre and unexpected jolt of jealous weirdness whenever I’m around my ex and her boyfriend together.

I notice their Valentine’s Day and birthday cards to one another, or their couples photos on display whenever I’m at her house to pick up our son (which is several times per week). I notice when they hang out with my friends who I used to hang out with back when she and I were still together. I notice all of it. And it’s uncomfortable. Six years later. Totally uncomfortable.

But I already lived through the horror show of my ex-wife and son being around an evil dickbag, and spazzing the eff out over it. I already lost sleep thinking about all of the strangers she might meet at work, the grocery store, the gym—wherever—who could turn out to be some huge prick who mistreats her or my son, and then we’d have to live with that whole mess again of me wishing death on a relative stranger.

But this guy isn’t a relative stranger.

He’s someone I met years ago. He was cool then. I liked him then. He’s cool now. I like him now.

Do I like thinking about him touching my ex-wife? Nope. Still inexplicably not something I feel good about.

But is that the most important thing about him? Not even top 10.

He’s not my son’s father. But my young man better damn well show him respect and appreciation.

And I’m not inclined to celebrate the relationship, but I have good reason to be grateful for it.

On this Father’s Day, I won’t just celebrate my dad, my stepdad, or soak up attention from my son who’s big enough now to conscientiously try to make the day about me.

So let’s raise our glasses. To celebrate all the dads. The birth dads. The stepdads.

And the guys who aren’t really either of those things, but they’re just decent men doing the thankless work of making things around them a little bit better than they found them. As good men try to do. As good dads try to do. I salute each and every one of you.

Facebook100Tweet1PinEmailShares101
wpDiscuz
Share this ArticleLike this article? Email it to a friend!
Email sent!