Get Daily Email
Join/Login CLOSE
Home / Featured Content / Is It Too Late For Couples Therapy? 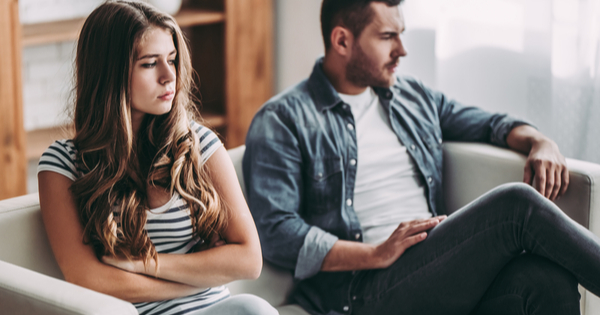 The Hail Mary. That last-ditch effort to eke out a win in a football game.

It’s how many men try to save their relationship.

Seven seconds left in the game. You’re down by three points at your own 42-yard line.

The center snaps. The quarterback fades and tosses towards the end zone.

You hold your breath. And maybe. Just maybe. It’ll land into the hands of one of your wide receivers.

The Hail Mary, that final act of desperation, is an apt metaphor for how a lot of guys approach their marriage.

For months or years, there’s been tension in the bedroom. Arguments. Fights. A sense of invisibility to one another.

The writing’s on the wall. Something’s gotta change. He’s tired of walking on eggshells around her. Sex has flatlined. She can barely tolerate him anymore.

It’s the 4th quarter. And now he’s asking himself, ready to toss a Hail Mary…

Is it too late for couples therapy?

Is that a powerful stance for you as a man?

What if instead, you went after change in your relationship right now?

My client Mike did just that. He’d been kicking the can down the road, doing nothing to improve his marriage. But then he saw one of my videos and contacted me.

He believed things couldn’t get any worse than they already were. He was tired of punting on the issues killing his marriage.

For six months, he worked with me to deal with his fears of losing his kids, his reluctance to confront his domineering wife, his fear of blowing up his family.

In powerful 1:1 conversations, I helped Mike realize how fear was stopping him dead in his tracks, keeping him falsely safe, and how doing nothing was creating an even bigger track record of distrust with his wife.

Once he saw that, he got clear that he wanted to save his marriage, like it was the first quarter. Not just a Hail Mary.

With his new clarity, I worked with him and his wife, to get them back on track to hear and see one another, to get safe again, and have fun and be playful.

Unlike a couples therapist they’d worked with, I held them accountable to consistently do what I call “The Check-In.” It’s a simple couples practice that, if done consistently, will bring you and your partner back into vibrant connection.

Watch the video below now and get a free pdf outlining the steps of “The Check-In.”

What was the key to Mike saving his marriage?

He decided he was in 100%. Not wishy-washy. Not looking for “the expert” to save him or tell him if his marriage had a chance.

He started showing up in a whole new way. And his wife did too.

Don’t kick the can down the road until it’s the 4th quarter. Step into what you’re avoiding right now. Your life will change forever because of it.