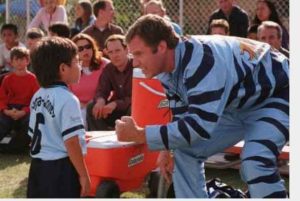 Hank Zona reads us parents the riot act for the negative impact we have on our children in Part I of his three-part series on adults and youth sports.

I have read some probing pieces lately about the Sayreville high school football sexual abuse and bullying case, including Michael Kasdan’s report for The Good Men Project. These pieces have been thoroughly well written – and thoroughly troubling – but one aspect that is treated almost as a secondary note is the behavior of many of the parents involved. Group think, cluelessness, dishonesty, bullying. It often applies to many of the adults involved, not just the students.

This is not unique to Sayreville. It is in all communities, regardless of region, race and socioeconomics. Even in my own “enlightened” community, the behavior of parents is at times troubling. My community also places as much emphasis on the arts as many communities do in sports, and some of the behavior isn’t terribly different. This all is not about sports as much as it is about parenting and the behavior of many adults.

Some parents may not want to read this because they may see their behavior in it, although in my many personal conversations on the topic, most will quickly see the telltale traits in some other parents. That is itself an issue. We are aware there is a problem with sports parenting because we see it often, just not often enough in ourselves. I am waiting for the #NotThisParent or #YesThatParent national social media campaigns.

This is not to say that there are not lot of parents that “get it.” And it may well be that for the many that don’t, at least their neglect is usually benign. But the all-too-prevalent negative anecdotes of sports parents gone wild have a major impact on not just their own children, but other children, and the way youth sports are viewed today.

1. “We show up at every game to give our full support and attention.”

Well. Sort of. OK. Not really. We aren’t fully engaged in our child’s sporting event. Sure, we show up, often and in great numbers, but we are distracted. We think we are watching every little detail, but often, many of us in attendance are talking, joking, juggling other kids, maybe even the dog, typety type typing on our phones, or dashing off to get something to eat. And sure, I’ll have another cup of what you’re having.

You get the picture. We think we know everything that is going on, so much so that we are quick to question an official or a coach or a player on the team to those around us.

Though we are often part-time viewers, we hold ourselves out as full-time experts. We do not have any idea what is going on in the dugout or on the bench.

2. We know everything there is to know about the sport.

Well. Not really. Watching it on TV or reading about it doesn’t qualify us as experts in educating children, and as sports parents and coaches, we are educators.

Most of us really don’t know the rules, or proper athletic techniques, or proper fitness and first aid care, or how to handle kids emotionally, all in what amounts very much to a multiple intelligences environment more so than most classrooms. Even organized sports requirements to take a certification class like the Rutgers program are more about liability concerns than coaching.

As one example – and there are oh so many – screaming instructions like “kick it” or “pass it” or “press up” to every child soccer player that nears the sideline  is not only confusing, but its counterproductive. It cannot help your child – or any child – and likely does much to unwork what the coaches are trying to accomplish.

3. “My kid is having a great experience and I don’t want to ruin it.”

This one is especially troubling, no, make that the most troubling. We have so much pressure or guilt or whatever it is about being “good parents,” that if we see something negative, more often than not, as long as it doesn’t impact our son or daughter directly, we say nothing. That oft-uttered concept of team togetherness goes out the window if raising an objection may impact your child’s good time, playing time, future even in the face of inappropriate, maybe even illegal behavior by a coach.

Re-read that last sentence – it is not an exaggeration. And that is an incredible shame. It is perhaps the most dangeous display of selfishness in sports parenting, and it takes root in the beginning and continues right up through college. We are unwittingly teaching our kids a couple of terrible lessons along the way:

4. Even if we weren’t athletes, we want our kids to play a sport if they have some acumen and interest.

This is because we want our kids to be hip, popular, accomplished, and sports are often a demonstrative display of what we perceive those traits to be.

I saw a parent pull their child out of the dugout in the middle of a tee-ball game to have a catch on the sideline because sitting there with teammates wasn’t good use of the child’s time. Another parent once came up to me to say their child had easily surpassed the level of tee-ball play based on their backyard athletic displays and was ready to move up to the next level.

Not only does this set the table to make both kids uncoachable, these parents layered on an extra place setting to make their children resistant to a lot of adult input. There is a big difference between building necessary confidence and esteem in our children and instilling an attitude of arrogance and exclusionary behavior in them. By the way, neither child from the above anecdotes did much in organized sports beyond middle school, and even there they weren’t standouts.

5. “I have made a major financial investment in my kid’s development.”

Money isn’t everything and there are no guarantees for a significant return on investment. The culture of private coaching has skewed not talent levels as much as perceptions that every kid can “make it someday,” whatever “it” is.

It is the sports world version of Lake Woebegone, where every child is exceptional. Here is the deal though – you aren’t elite because someone slaps an “elite” tag on a team and charges elite prices for your child’s participation.

At a batting cage once with my kids, I watched someone from the neighborhood receiving private instruction and the he was twisted all around. I mentioned it in passing to the father when I next saw him and the response was, “I am paying these guys a lot of money to work with him. I appreciate your input but they are experts. One of them played in the minor leagues.” I admit, I’m not an expert, but playing for five minutes in the minors doesn’t make someone an expert in instruction. Interestingly, some of the greatest hitters were never great hitting coaches and some of the best coaches were awful major league hitters. By the way, the kid from the neighborhood did make it someday. He played on the high school team, on occasion as a reserve.

Someone in a community other than mine once offered me $75 an hour to give their child batting lessons because their batting instructor, being paid at that rate, wasn’t getting them results. I don’t do that I told her, although if you do the math, at a 40 hour work week, that is the equivalent of $156,000, way more than just about any educated and qualified school teacher makes. Do you see anything wrong with that?!  I thought so.

One thing I always say to any kid when giving them free tips on how to hit, throw, shoot better: “Get yourself balanced, because life is all about balance.“

I hope some of the parents overheard me.

Editor’s Note: This series of posts was originally run on the Good Men Project site in the Fall of 2014. They remain topical and relevant, so we are re-running them here in 2020!

Sign up for our daily or weekly newsletter here. (We also send out a “best of sports” every Sunday).

Hank Zona lives in Maplewood, NJ with his wife and two children. He has been coaching youth sports and trying to play sports youthfully most of his adult life. Both endeavors have regularly distracted him from his wine education and events business.

Good article that raises some things that need to be discussed. Let me expand it a bit further, as someone who has been working (scratch that: playing) with kids and teens for 17 years: In “how to get better at being sports parents and coaches” discussions we often miss a HUGE issue: the loss of neighborhood PLAY. The loss of the kids’ ability to create and direct their own experience. There are quite literally thousands of games kids could be playing. But we restrict them to sanctioned sports that are versions of what professional athletes play. Please don’t misinterpret this… Read more »

YES! Hank Zona you hit the nail right on the head! On all of it. And what I really appreciate is that those points you made are rarely highlighted. The parents who are constantly all over their children (and their coaches) because they want them to have the best experience possible are always, without fail, the ones who have ruined their child’s ability to build trust and respect from their teammates and coaches.Without fail the children I have seen excel do so not always because of athletic prowess, but for sheer love of playing and being social. They work hard… Read more »

Nice point Duncan. I agree with you on all the wonderfulness of baseball. It’s why I coached too. And why I loved it. Certainly my son Jacob pushed us to play more than we push him; because he just loves it… I’m sure that’s not always the case….I guess that is what Hank is warning about.

Hank…excellent piece and as a coach myself I recognize a lot of this. But I have to take a bit of exception to number 4 as it seems to exclude the childs wants. Particularly this. “This is because we want our kids to be hip, popular, accomplished, and sports are often a demonstrative display of what we perceive those traits to be.” That isn’t now, and never was, the reason for my son getting into baseball. He loves to play the game. And it isn’t why I coach or encourage him to play the game. Baseball, as a team sport,… Read more »

END_OF_DOCUMENT_TOKEN_TO_BE_REPLACED

Facebook271Tweet1Pin4EmailShares276
wpDiscuz
Share this ArticleLike this article? Email it to a friend!
Email sent!