There’s been a meme floating around for a month or two that shows a row of five numbered chicken wings, each one a little more stripped of meat than the last. Number one has a single small bite taken out of it; number five looks like it’s been dug up by a paleontologist. The punchline is that you can tell a lot about someone’s upbringing based on the amount of meat left on the bone. 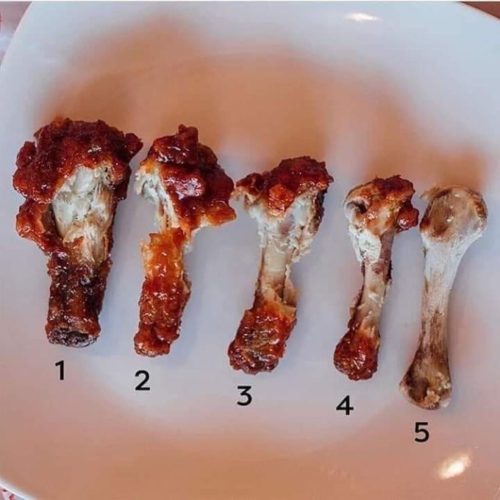 My 11-year-old son and I both love wings, but we are on opposite ends of this chart. On the cleaned chicken bone scale, I’m about a five — every scrap of flesh gone, along with a good bit of cartilage. Meanwhile, he’s a solid two — a couple good bites, then he’s reaching for the next piece.

I’m always after him about how much good food he’s throwing away. I learned growing up that you had to clean the bone thoroughly. When it comes to eating wings, the boy is just downright wasteful, and it worries me.

While I want my son to have the advantages I didn’t grow up with, I also want him to have gratitude for what he has and empathy for those who don’t.

I grew up the oldest of six kids raised by a single mother. There was enough money that we never went hungry, though one summer we did subsist solely on Malt-O-Meal and hot dogs. But in a house with so many mouths to feed and bodies to clothe, we were short on luxuries and long on hardships. Bill collectors calling, midnight moves, disconnection notices on the dining room table, missed school events—it was the kind of childhood that I vowed my child would never experience.

Today, my son is the only child in a two-income household, and his mother and I have worked hard to ensure that he doesn’t want for anything. But while I want my son to have the advantages I didn’t grow up with, I also want him to have gratitude for what he has and empathy for those who don’t. So I’ve spent a lot of time making sure that he knows how I used to struggle and how great he has it, thanks to his parents’ hard work. And most importantly, I want him to know that there are a lot of kids who would stand in line to live in our kind of household. You know, life lessons.

But how can he hear those lessons over the privilege we’ve heaped upon him? It’s the only lifestyle he’s ever known.

When he was a toddler, I came home from work to find him sitting in a high chair, casually eating a bowl of fresh blueberries. I was appalled, mentally guesstimating the per-pint price of such fruit in early spring, like Terry Crews’ character in Everybody Hates Chris. I told my wife that I was 30 years old when I had a real blueberry for the first time, and not just something blueberry flavored. The baby couldn’t appreciate fresh blueberries anyway, could he?

My wife pointed out that the blueberries were organic and pesticide-free (which means even more costly!), and that we were trying to give our child a better life than we’d had. I pouted for the rest of the evening.

When he got older, my son told me that he couldn’t understand why anyone would ever fight anyone about anything, and all I could do was shake my head. “If someone takes something that you have,” he wondered aloud, “why don’t you just go and get another one?” You might call that an “abundance mentality,” but where I come from, it’s also known as “woefully unprepared to face the world in any way.”

Still, I get it. My son’s childhood is different than mine — and by design. I mean, do I want him to have to fight as hard as I had to? I guess not. But I do want him to fight.

Maybe not in the same way, and certainly not for the same things. I fought for the basics; I sometimes fought in the street. I want my son to compete in the boardroom or the courtroom.

And that’s why I keep telling him about my fights.

When he turned nine, I took one look at a report card full of barely okay grades and drove him to my old neighborhood on the South Side of Chicago. I figured I would show him around, let him get a gander at what a C in math could get you.

I hit the highlights:

“Hey! When Daddy was your age, he got beat up by two girls right there at the corner of 111th and Wentworth!”

Later: “Oh. My. God. I loved living there! That is the best place we ever got evicted from.”

This little trip down memory lane didn’t seem to have much effect on the boy, but it damn near broke me. I was depressed for a week.

In retrospect, it’s easy to imagine that scarcity — of money, safety, and stability — was essential to my success, or at least an influential ingredient. By giving my 11-year-old a better life, I sometimes worry that I’ve denied him some valuable lessons. And those are the kind that I feel most qualified to teach.

I should know better, of course, that my thinking around struggle and solid values can be stereotypical. I know plenty of people who had more secure home lives than my own. They are the descendants of doctors and lawyers and teachers. Their parents have been married for decades. Some spent their summers in the Hamptons — I wish I’d known when I was a kid that some Black families spent their summers in the Hamptons! — and in Europe. They got cars at 16 and graduated free of student loans. And still, the vast majority of them are genuinely good people: hardworking, loving, compassionate, happy, and successful.

And there has been a downside to all this talk about my meager upbringing. Like a computer glitch that you can’t reliably reproduce, my son will sometimes become convinced that we’re struggling. Like, now, in a home where we send the dog to daycare.

Recently, while dropping him off at school, I noticed that his winter coat was badly torn. I could stick my hand in the hole.

“How long has your coat been like that?” I asked him.

I sat there, trying to calculate how many days I’d driven him to school in this tattered coat without noticing — and how many teachers would be side-eyeing me at the next Parents Day.

“Well, why didn’t you say something?”

“Because I know we don’t have much money, so…”

At that moment, I thought of a green winter coat with a big fur hood that I owned when I was around his age. We used to call them Eskimo coats. Mine had a foot-long rip in the back after I tore it on a fence. And I knew not to ask my mother for another one, so I wore it all winter.

Had I told him that story? Probably.

I had been spending most of my time working to keep my son out of poverty — while at the same time teaching him a mindset mired in that very poverty. I was giving him anxiety around the same things I had been anxious about, even though he never had to experience them. So, when I picked him up from school that afternoon, I apologized.

“Look, buddy, your mama and I always have enough to get you the things you need. You don’t have to worry about stuff like that, okay?”

“I mean, if you really want to do something, you can do a better job on the chicken wings we’re grabbing for dinner.”

He did not, of course, do better with the chicken wings. He’s still holding steady at a two. But I kept quiet.

Not everything has to be a lesson.

This post was previously published on LEVEL and is republished here with permission from the author.
—