It’s still early in February, but Detroit Tigers set-up man, Buck Farmer, along with his wife and newborn daughter, have already made the trek down to Clearwater, Florida to get a head-start on Spring Training.

Soaking up the warmer weather, with baseball season coming down the pike, “there’s just something about Florida.”

The 28 year-old right hander, who was drafted by the Tigers in 2013 out of Georgia Tech and made his MLB debut just one year after that, comes into the 2020 season settling into both his role in the Tigers bullpen as well as his new role as Dad to his newborn baby daughter.

Evelyn Rose Farmer, was born just a few months ago on November 5, 2019. And its fair to say that Farmer is over-the-moon excited: 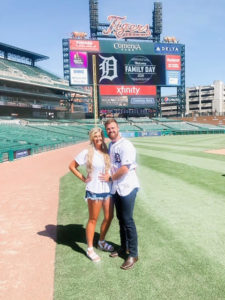 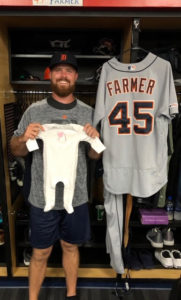 On the baseball side of things, the 6’4” hard-throwing Georgia native, has found a home at the back-end of the Detroit bullpen, setting up closer, Joe Jiménez. Last season, over 67 innings, he sported a 3.72 ERA, a 1.271 WHIP, and struck out 72 batters, using an assortment of four-seam fastballs, cutters, and sinkers.

A fast riser through the Tigers system himself, Farmer recognizes how “quickly baseball has evolved into a sport of youngsters. Just like with any job, who doesn’t want someone that has experience doing that job? But there is so much young talent, and baseball is just getting younger and younger every year.” Younger players being given more opportunities can increase the pressure to succeed quickly for those youngsters, as well as keep the pressure on established players to continue to perform at a high level.

A few years ago, Farmer was that young kid. Now, all of the sudden, he is among the veterans, recognizing that “each year there is somebody twice as young as I am, who is pushing to really take my job.” That’s just the way it is. As Farmer put it, “It is crazy, but if it wasn’t crazy and it wasn’t hard, I wouldn’t do it.”

Farmer has been with the Detroit Tigers organization for his entire professional career, and he believes strongly in what they are building:

“I honestly think we are getting to a point – and everyone talks about this rebuild thing – but its takes time and all teams do it and go through it – but I think we’re going in a great direction.”

Farmer is particularly excited for the season, for the opportunity to build on the prior seasons, and to take a step forward in building a competitive team.

Although he’s now a fixture on the Major League team in Detroit, like many players, Farmer put his time in working on his craft in some out of the way locales. One of Farmer’s stops in the minor leagues along the way was in Western Michigan, where he was recently inducted to the Western Michigan WhiteCaps Hall of Fame, “the first time I’ve ever been inducted into a Hall of Fame for anything.” With his father by his side, it was a special moment for Buck, who speaks with a palpable sense of love about the city of Western Michigan, the WhiteCaps team, and the fans.

The thru-lines of baseball – from young to old, from the Majors to the Minors to College to High School to youth leagues – are important to Farmer. Over the past number of off-seasons, Farmer has helped to run a baseball camp for teenagers called Devine Baseball Camp, and is a big believer in kids playing multiple and varied sports until later in high school, when you might need to specialize. “Let them have fun and experience it all,” is his perspective. At Devine, “we just run ’em through pitching drills and do our best to help get them ready for their high school season.” For these high schoolers, the camp provides the invaluable chance to get in front of some MLB and MiLB players and pick their brains.

Growing up just outside Atlanta, Farmer’s pitching heroes were the Braves iconic triumvirate of John Smoltz, Greg Maddux, and Tom Glavine, each dominant in his own way:

“I think the guy that I liked the most of all three of them was Smoltz, who was right-handed like me, and also because he was a dominant closer and a dominant starter, which is something no one else has really done.”

Farmer himself has made the transition from starter to reliever:

“As much as I would have loved to have stayed a starter, because you’re in control of the game for a longer time, its tough to negate being in a role where you’ve had some sort of success. And that’s the big thing about the Big Leagues for a lot of guys: finding success somewhere. And then once they find that success somewhere they can go from being good to being great. It’s been a blessing that I was given the opportunity to become a reliever by the Tigers. And I’m enjoying every minute of it.”

With baseball evolving to a more relief-pitcher focused game, today’s game has an increased emphasis on relieving as a huge part of winning baseball. Farmer also loves the pressure, high-leverage situations. “Honestly, that’s what a lot of guys feed off of too. I love being in those situations.” As an added perk, out in the bullpen, spending a lot of time in a confined area with a small group of teammates, molds the bullpen group into a special type of tight-knit family: “Oh, I wish I could tell you everything about it, but man, we’re a family down there. It’s awesome.”

If he allows himself to put his fan hat on, the player that Farmer identified off the bat as his favorite current player in the game to watch (after giving Mike Trout an obligatory shout out – “because that guy is incredible to watch”), is former Detroit Tiger and current Houston Astros ace, Justin Verlander:

“He’s almost like Tom Brady. He’s defying age at this point. Each year he’s getting older, but his stuff gets better. He is a different breed, and it is tough not to like that guy. I was fortunate enough to sit there [on the Tigers] and watch him for a few years.”

Along the way, Buck Farmer has also become known as a bit of a BBQ aficionado:

Sean Doolittle made a little bit of a name for himself last season exploring local bookstores; Buck Farmer is doing a bit of that, but tapping into his inner foodie and sampling delicious barbecue from city to city. (Farmer wins!). “Obviously, if it concerns food, I am there. It’s tough to have the love of food that I do and also stay in baseball shape!”

Barbecue – both the food and the experience of eating it with family and friends – has been a part of Farmer’s life for a long time:

“I don’t want to say that I grew up on it, but I grew up eating a lot of it…There was a place in my hometown where I grew up called Pippin’s BBQ, and we spent a lot of time over there, me, my Dad, and my brother, just hanging out and eating BBQ. And this was a place with six tables. If there were 10 of us in there, it was packed. That kind of got me going, and now any opportunity that I have – out on the road – to explore new places, that’s what I do.”

While breakfast can sometimes be a little tough to get up for, lunchtime is a perfect time to explore. Farmer raves about Kansas City for its BBQ, especially, but also gave props to local Slows and Woodpile right at home in the Detroit, Michigan area.

After spending some time with Buck Farmer, its easy to see that there’s a reason this man is smiling.

Sitting on the cusp of the 2020 season is an exciting time for Buck and his (growing) family, for a whole lot of reasons.

There’s a whole lot to look forward to both on and off the field.

Facebook336Tweet2Pin1EmailShares339
wpDiscuz
Share this ArticleLike this article? Email it to a friend!
Email sent!