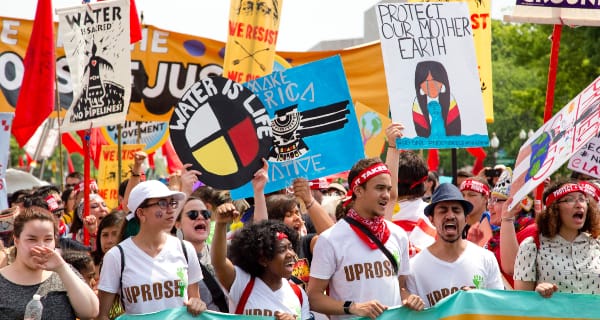 Can an ancient legal principle with roots in Roman law serve as a tool for the climate protection movement?

On October 23, Alec Johnson, aka “Climate Hawk,” is scheduled to go on trial for locking himself to a construction excavator in Tushka, Oklahoma as part of the Tar Sands Blockade campaign to block the route of the Keystone XL tar sands pipeline. He intends to argue that resisting the pipeline was necessary in order to protect the public trust – the common property right of the people to essential natural resources. Johnson will be the first defendant anywhere to make a necessity defense based on the duty of government to protect the climate under the public trust doctrine.

In a speech in Nacogdoches, TX on the day of the 2014 Peoples Climate March, Johnson said, “When it comes to our commons, to our public property, we the people have rights in a public trust.” The public trust doctrine means “we have rights when it comes to how our public commons are administered.” He will argue that his blockade of Keystone XL pipeline construction was necessary because the pipeline threatens our atmospheric public trust and state and national governments are failing to protect us against that threat.

Meanwhile, last week a petition was filed with the US Supreme Court by five youth plaintiffs seeking a decision that the Federal government is obligated to protect public trust assets like the atmosphere and the climate that under the public trust doctrine belong to the people. Behind this case lies a unique organizing effort by the group Our Children’s Trust, which has brought together young people and their legal supporters to file suits and petitions not only in Federal court but in every state in the US and several other countries. Then-sixteen-year-old Alec Loorz, founder of Kids v. Global Warming and lead plaintiff in the federal lawsuit, explained its public trust claim: “The government has a legal responsibility to protect the future for our children. So we are demanding that they recognize the atmosphere as a commons that needs to be preserved, and commit to a plan to reduce emissions to a safe level.”

And at a Climate Justice Tribunal across the street from the UN climate summit last month a judicial panel, after hearing evidence of devastating impacts of climate change around the world, declared that governments have a duty under the public trust doctrine to halt climate destruction. Organized by the Climate Justice Alliance and inspired in part by the International War Crimes Tribunal organized during the Vietnam War by renowned philosophers Bertrand Russell and Jean-Paul Sartre, the Tribunal’s judicial panel found that “Based on the evidence we have heard here today, the nations of our world are in violation of their most fundamental legal and constitutional obligations.” It called on governments to honor their duty to protect the atmosphere, which belongs in common to the world’s people, and halt their contribution to climate destruction.

Some courts are already starting to apply the public trust doctrine to protecting the atmospheric commons. Last December the Pennsylvania Supreme Court overturned a law that prevented local communities from blocking fracking. The plurality opinion held that public natural resources are owned in common by the people, including future generations. Because the state is the trustee of these resources, it has a fiduciary duty to “conserve and maintain” them. The state has “a duty to refrain from permitting or encouraging the degradation, diminution, or depletion of public natural resources.”

Will courts force governments to fulfill that duty? So far several state courts have accepted important parts of the youth plaintiffs’ argument, but none have ordered a government to act. But in the meantime, thousands of people are sitting-in and blockading to halt climate-destroying activities. The judicial panel of the Climate Justice Tribunal declared that “those who blockade coal-fired power plants or block tar sands oil pipelines are committing no crime.” Rather, they are exercising their right and responsibility to protect the atmospheric commons they own along with all of present and future humankind. They are acting to prevent a far greater harm — indeed, “a harm that by virtue of the public trust doctrine is itself a violation of law on a historic scale.”

Alec Johnson says that “we the people” are “armed” by the public trust doctrine to demand that governments “recognize their responsibilities as trustees and exercise their fiduciary responsibility to act with the highest duty of care” to sustain the resources necessary for society to endure. “Enforcing our children’s rights to climate justice is no crime.”

—
This post was previously published on OnTheCommons and is republished here with a Creative Commons license.
—

Photo by Vlad Tchompalov on Unsplash

END_OF_DOCUMENT_TOKEN_TO_BE_REPLACED

Facebook61Tweet1PinEmailShares62
wpDiscuz
Share this ArticleLike this article? Email it to a friend!
Email sent!