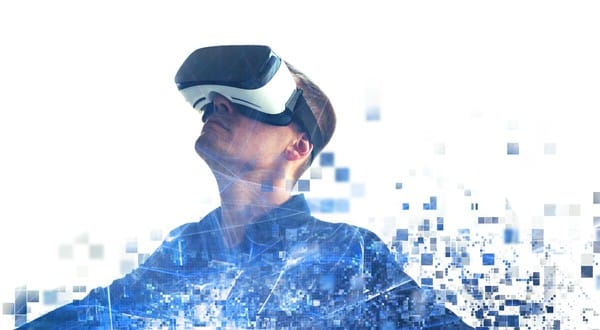 The pace of progress in computers has been accelerating, and today, computers and networks are in nearly every industry and home across the world.

Many observers first noticed this acceleration with the advent of modern microchips, but as Ray Kurzweil wrote in his book The Singularity Is Near, we can find a number of eerily similar trends in other areas too.

According to Kurzweil’s law of accelerating returns, technological progress is moving ahead at an exponential rate, especially in information technologies.

This means today’s best tools will help us build even better tools tomorrow, fueling this acceleration.

But our brains tend to anticipate the future linearly instead of exponentially. So, the coming years will bring more powerful technologies sooner than we imagine.

As the pace continues to accelerate, what surprising and powerful changes are in store? This post will explore three technological areas Kurzweil believes are poised to  change our world the most this century.

[Read more about exponential progress in computing, Kurzweil’s law of accelerating returns, and how to think exponentially and better predict the future.]

Of all the technologies riding the wave of exponential progress, Kurzweil identifies genetics, nanotechnology, and robotics as the three overlapping revolutions which will define our lives in the decades to come. In what ways are these technologies revolutionary?

While genetics, nanotechnology, and robotics will peak at different times over the course of decades, we’re experiencing all three of them in some capacity already. Each is powerful in its own right, but their convergence will be even more so. Kurzweil wrote about these ideas in The Singularity Is Near over a decade ago.

Let’s take a look at what’s happening in each of these domains today, and what we might expect in the future.

The Genetics Revolution: ‘The Intersection of Information and Biology’

“By understanding the information processes underlying life, we are starting to learn to reprogram our biology to achieve the virtual elimination of disease, dramatic expansion of human potential, and radical life extension.”
– Ray Kurzweil, The Singularity Is Near

We’ve been “reprogramming” our environment for nearly as long as humans have walked the planet. Now we have accrued enough knowledge about how our bodies work that we can begin tackling disease and aging at their genetic and cellular roots.

We’ve anticipated the power of genetic engineering for a long time. In 1975, the Asilomar Conference debated the ethics of genetic engineering, and since then, we’ve seen remarkable progress in both the lab and in practice—genetically modified crops, for example, are already widespread (though controversial).

Since the Human Genome Project was completed in 2003, enormous strides have been made in reading, writing and hacking our own DNA.

Now, we’re reprogramming the code of life from bacteria to beagles and soon, perhaps, in humans. The ‘how,’ ‘when,’ and ‘why’ of genetic engineering are still being debated, but the pace is quickening.

Major innovations in biotech over the last decade include:

Many challenges still need to be overcome before these new technologies are widely used on humans, but the possibilities are incredible. And we can only assume the speed of progress will continue to accelerate. The surprising result? Kurzweil proposes that most diseases will be curable and the aging process will be slowed or perhaps even reversed in the coming decades.

The Nanotechnology Revolution: ‘The Intersection of Information and the Physical World’

“Nanotechnology has given us the tools…to play with the ultimate toy box of nature atoms and molecules. Everything is made from it…The possibilities to create new things appear endless.”
– Nobelist Horst Störmer, The Singularity Is Near

Many people date the birth of conceptual nanotech to Richard Feynman’s 1959 speech, “There’s Plenty of Room at the Bottom,” where Feynman described the “profound implications of engineering machines at the level of atoms.” But it was only when the scanning tunneling microscope was invented in 1981 that the nanotechnology industry began in earnest.

Kurzweil argues that no matter how successfully we fine tune our DNA-based biology, it will be no match for what we will be able to engineer by manipulating matter on the molecular and atomic level.

Nanotech, Kurzweil says, will allow us to redesign and rebuild “molecule by molecule, our bodies and brains and the world in which we live.”

While we can already see evidence of the ‘genetics revolution’ in the news and in our daily lives, for most people, nanotech might still seem like the stuff of science fiction. However, it’s likely you already use products on a daily basis that have benefitted from nanotech research. These include sunscreens, clothing, paints, cars, and more. And of course, the digital revolution has continued thanks to new methods allowing us to make chips with nanoscale features.

In addition to already having practical applications today, there is much research and testing being conducted into groundbreaking (if still experimental) nanotechnology like:

Though we continue to improve at manipulating matter on nanoscales, we’re still far from nanobots or nanoassemblers that would build and repair atom by atom.

That said, as Feynman pointed out, the principles of physics do not speak against such a future. And we need only look to our own biology to see an already working model in the intricate nano-machinery of life.

The name of this revolution might be a little confusing. Kurzweil says robotics is embodied artificial intelligence—but it’s the intelligence itself that matters most. While acknowledging the risks, he argues the AI revolution is the most profound transformation human civilization will experience in all of history.

This is because this revolution is characterized by being able to replicate human intelligence: the “most important and powerful attribute of human civilization.”

We’re already well into the era of “narrow AI,” which is a machine that has been programmed to do one or a few specific tasks, but that’s just a teaser of what’s to come.

Strong AI will be as versatile as a human when it comes to solving problems. And according to Kurzweil, even AI that can function at the level of human intelligence will already outperform humans because of several aspects unique to machines:

Most of us use some form of narrow AI on a regular basis — like Siri and Google Now, and increasingly, Watson. Other forms of narrow AI include programs like:

The next step towards strong AI will be machines that learn on their own, without being programmed or fed information by humans. This is called ‘deep learning,’ a powerful new mode of machine learning, which is currently experiencing a surge in research and applications.

Why Is This Important?

Kurzweil calls genetics, nanotechnology, and robotics overlapping revolutions because we will continue to experience them simultaneously as each one of these technologies matures.

These and other technologies will likely converge with each other and impact our lives in ways difficult to predict, and Kurzweil warns each technology will have the power to do great good or harm—as is the case with all great technologies. The extent to which we’re able to harness their power to improve lives will depend on the conversations we have and the actions we take today.

“GNR will provide the means to overcome age-old problems such as illness and poverty, but it will also empower destructive ideologies,” Kurzweil writes. “We have no choice but to strengthen our defenses while we apply these quickening technologies to advance our human values, despite a lack of consensus on what those values should be.”

The more we anticipate and debate these three powerful technological revolutions, the better we can guide their development toward outcomes that do more good than harm.

This post was previously published on Singularity Hub and is republished here under a Creative Commons license CC BY-ND 4.0.
—
Photo credit: Shutterstock