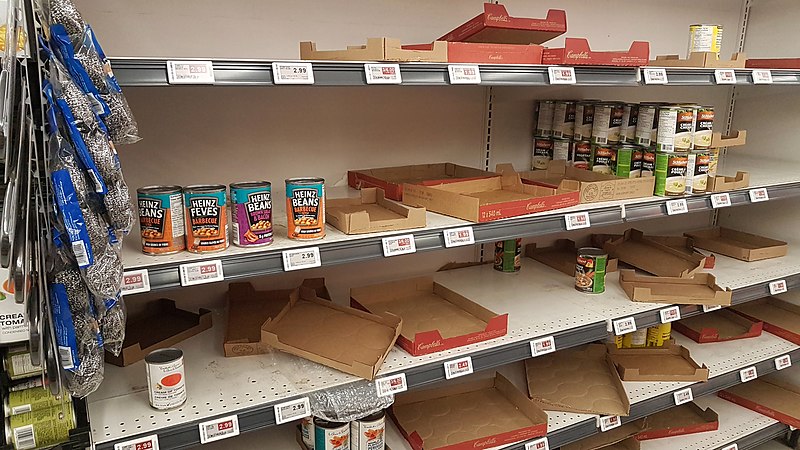 We are at war, mostly with each other. Opposing parties in congress are locked deep in a battle to blame each other for the misery or take credit for the improvement.  Reporters are being criticized for reporting, as if telling people there is a problem is the problem. The president, for the first several weeks, took on the appearance of the captain of the Titanic, “Don’t worry folks, we just stopped to pick up a little ice.”

Lost somewhere in there is the novel coronavirus which causes COVID-19. And now our nation has gone into full panic, assault grocery shopping, combat provisioning, doomsday preppers on center stage.

Yesterday, we had leftovers for lunch. We like leftovers, some food gets better after sitting for a day or two. Allowed to stew on its own the individual atoms begin to merge, forming a super atom, filled with dynamic taste molecules, it becomes an irresistible flavor bomb.[1] Dinner was on its own, though, we were out of leftovers and had to start from the beginning.

“How about that casserole with spicy sausage, hash browns and peppers? It makes for great leftovers.” I said.

Off I went, in search of dinner. It was chaos.

Kroger, our go-to store was picked clean. It looked like it had been robbed. Empty shelves, bins, baskets.

Shoppers wandered, lost and alone, some panicked, some angry, others with the tired look of defeat. The store didn’t have anything on my list, not a single pepper, no sausage, nothing, but I couldn’t leave. It was like a scene from a movie. Ghost shoppers wandered mostly empty aisles, looking for something to put in their cart. Working against hope were haggard-looking employees trying in vain to re-stock the shelves.

I turned down one aisle and a woman was standing on her toes throwing a box of orzo at a box of lasagna noodles. It was on the top shelf, and she could recognize that it was pasta, but she couldn’t see what kind it was. She was trying to get it to rebound off the back of the shelf far enough forward that she could see what it was and possibly grab it and put it in her cart.

“No, not at all. How else were you going to find out?” I said, thinking savage might be a better description.

I wandered around, snapping pictures with my phone, marveling at the choices people had made. All the canned soup was gone. Wiped out, not even a cream of mushroom left. There was not a single bag of tortilla chips left, but there were still plenty of avocados. It just didn’t make any sense. The bread crumbs had been picked clean, one box of Panko left, I grab it. Just because.

A guy walks past me, he has at least 15 packages of raw chicken legs in his cart. These are big packages, at least ten chicken legs in each. What is he going to do with all of those? He catches me staring and starts pushing the cart from the side, becoming a barrier between me and the poultry.

In the produce section, there is a woman sifting through the piles of leafy onion skins. She has found two or three and was holding them tight to her body with her left hand. It was almost theatrical she looked frail and lost, alone, she could have been Cossette.

Eventually, after three stores I found the peppers and sausage and we had dinner. I found something else as well. Mankind, driven to desperation, fighting an invisible foe. It laid bare the insecurities and fears we all carry inside, running out of food, water, being left behind.

Progress is only provisional, and it is probably foolish to overestimate our distance or our difference from the past. Yesterday was proof of the beauty and durability of humanity. Somehow, it made me happy watching how hard we were willing to fight to survive. We are going to make it, and I’m proud to be one of us.

[1] Probably not the real scientific explanation.

Facebook32Tweet4PinEmailShares36
wpDiscuz
Share this ArticleLike this article? Email it to a friend!
Email sent!