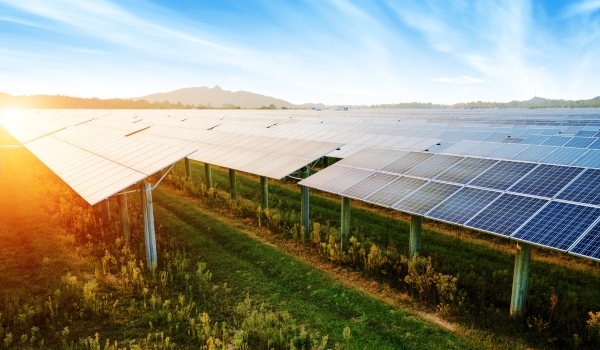 Every mouthful of food eaten by virtually every creature on Earth depends ultimately on the sun. But it can do much more than nurture the crops that feed us − and humans are starting to exploit this potential in striking new ways.

Farmers are now using solar energy to do far more than simply enable their crops to grow. Already it’s helping them to irrigate their fields and to clean their dairy equipment.

Only about 5% of Africa’s cultivated land is irrigated, compared with Asia’s 41%. Until recently, the other available methods have been manual irrigation, which is time-consuming and laborious, or petrol or diesel pumps, which are too expensive for many farmers and also add to greenhouse gas emissions.

But now there’s another way – solar-powered irrigation pumps. One pioneer of this technology is Futurepump, based in Kenya but importing the pumps from India. Its top-of-the-range SF1 pump costs about US$650, but the company says it pays for itself in one to two years and will enable farmers to save $100-200 a year.

Solar energy converted
The pump’s solar panel directly converts solar energy into electrical power, which is transferred to a simple motor that rotates a flywheel, whose turning moves a piston up and down to draw water through the pump cylinder.

The pump, which can produce enough water to irrigate about half an acre of land per hour, works on sunny and cloudy days, in the early morning and late into the evening – and is easily transportable.

Another Kenyan solar energy entrepreneur is SunCulture, which has developed what it calls its AgroSolar Irrigation System. This draws water from any source − for example, a lake, river, stream, well or borehole − using solar power.

The solar panels provide the pump’s power directly without the need for batteries or inverters. Water is pumped into a raised storage tank by day, and all the farmer needs to do in the evening is to open a valve on the tank so that the water flows down through a filtration system and onto crop root zones via drip irrigation tape.

In the Mandalay region, water levels are low and falling, making an alternative to increasingly expensive diesel pumps really important

SunCulture’s system costs US$890, and farmers using it have reported yield increases of 300% or more. Trained technicians and agronomists provide buyers with on-farm training, soil analysis and agronomy support by mobile phone and via a call centre.

Both SunCulture and Futurepump have been longlisted in the 2017 Ashden Awards, an annual international competition to encourage sustainable energy.

Proximity Designs, the winner of one of Ashden’s 2014 awards, is based in Myanmar, and introduced treadle pumps and other sustainable agriculture technologies to the country a few years ago.

It has now launched a solar irrigation pump, the Lotus, described as “radically affordable”: It costs US$345, a price that provides buyers with the pump itself, 260W of solar panels and a stand.

The Lotus can pump more than 15,000 litres of water a day, and the company estimates it will take farmers about 11 months to pay back their costs when they convert from a diesel pump. Farmers in dry parts of Myanmar can expect this return to be even quicker.

Accessible to farmers
Designers had difficulty in creating a pump to fit neatly into the 2-inch tube wells that are found throughout Myanmar. But the product had to be easily accessible for rural farmers. In the Mandalay region, for example, water levels are low and falling, making an alternative to increasingly expensive diesel pumps really important.

In Central America, Costa Rican dairy farmers have found another use for solar energy, and one which again means higher incomes for those who adopt it. A solar company, Enertiva, has designed solar water heaters that supply hot water for washing farmers’ milking equipment and tanks.

The country’s buoyant dairy industry has high standards, inevitably meaning high costs as well − including for electricity or gas to provide the hot water essential for keeping milking equipment clean. Farmers who used the fossil fuels can save around US$1,400 per year with the solar heaters, so can pay back their loan within one year.

Enertiva’s technology, which will work throughout the tropics and is now also being used in Guatemala and Panama, won an Ashden Award in 2015. – Climate News Network