Get Daily Email
Join/Login CLOSE
Home / Featured Content / What Is the Most Polluted City? It’s Really Important To Know 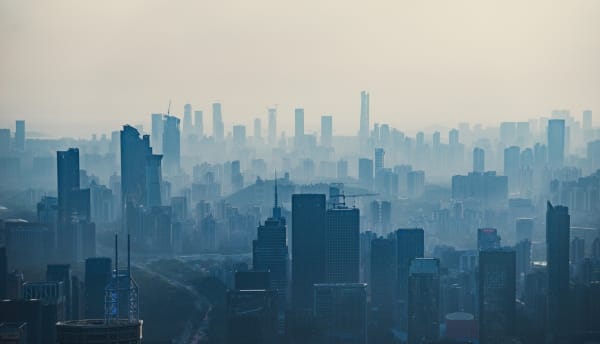 “I often see rankings of the most polluted city in the world,’” says Randall Martin, professor in the energy, environmental, and chemical engineering department in the McKelvey School of Engineering at Washington University in St. Louis.

“These rankings are misleading,” he says, “because there is insufficient information to know.”

In a paper in Atmospheric Environment: X, Martin outlines the extent of the gap between what researchers know and don’t know about on-the-ground levels of fine particulate matter, also known as PM2.5.

The number refers to the size of certain particulates in the air that constitute pollution—they are 2.5 microns and smaller; for scale, a human hair is about 70 microns in diameter. These particles can be composed of anything, such as dust and industry byproducts. Because of their size, they can travel through the body’s respiratory tract and deposit in the lungs.

The health impacts of PM2.5 start with cardiovascular damage and get worse from there. The Organisation for Economic Cooperation and Development estimates worldwide, the cost associated with premature deaths from pollution will rise from $3 trillion in 2015 to $18-25 trillion by 2060.

Understanding the amount of pollution in the air requires on-the-ground monitoring, but many cities—ostensibly some with high PM2.5 levels—have no monitoring at all. In India, for example, there is just one monitor for every 6.8 million people. Such sparse monitoring fails to represent pollution variability.

Martin and colleagues found that just about 9% of the world’s population lives in areas that have more than three monitors per million people. About 18% of the population live in areas without monitoring.

“Although the health effects of PM2.5 are valued at a few percent of global GDP, PM2.5 is grossly under-monitored,” Martin says. “The difference between the importance of this measure and the level of ground-based monitoring is shocking.”

Beyond mitigating health concerns, a better understanding of pollution on the ground is important for several reasons. For Martin, whose research sits at the intersection of remote sensing and global modeling, having accurate data is the only way to develop accurate models.

“Part of our analysis involves relating what satellites measure to ground-level PM2.5,” he says. “If we relied only on ground-based monitors, we would have insufficient information.”

PINPOINTING THE MOST POLLUTED CITY

In order to improve the ground-level data, Martin and colleagues propose a robust “integrated monitoring framework” composed of different types of monitoring equipment focused on the most densely populated areas, or even on those most prone to variability. They calculate that in order to achieve a goal of one monitor per million people, thousands of new monitors will need to come online.

In addition, Martin and colleagues suggests this framework should include ground-based aerosol measurements, innovative low-cost monitors, mobile monitoring, and measurements at different points along the vertical (by aircraft, for example). Integrating these systems would not only help researchers gain a more comprehensive picture of the PM2.5 levels on the ground, but would assist with air quality forecasting and help to improve atmospheric models.

“The ability to identify the location of the most polluted city in an indicator of scientific progress,” Martin says. “It is important to be able to answer basic questions about something this important. The drive to overcome this challenge speaks to something fundamental about our knowledge of the world around us.”

Support for the work came from the Natural Sciences and Engineering Research Council of Canada.