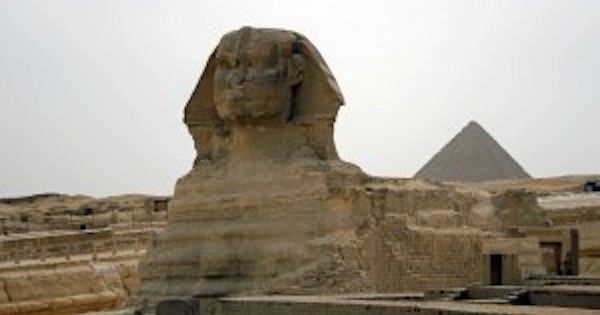 He ordered for the pyramids to be taken apart and it took workers eight months to wedge out a small vertical gash before the idea was given up due to costs that were higher than building the actual structures.

Looking up I couldn’t help but wonder how? How the hell did they even come up with the idea of a pyramid let alone position them astronomically aligned with Orion’s Belt, according to Robert Bauval’s theory from 1983 (published in 1989 in Discussions in Egyptology, Volume XIII).

And then came the Sphinx. I was a bit disappointed. It looks so much bigger in photos and documentaries. What I saw appeared to be the house-sphinx version.

Where’s the real one? I asked myself, ignoring the hawkers trying to get me to ride a camel that had a look on its face that said, ‘Shoot me. Please, just shoot me’ (if you ever find yourself at the pyramids, make sure the animal you ride is well-treated).

The sphinx is a mythological creature that acts as the guardian of the gateway to the after world. In Greek mythology it is a woman with lion haunches and wings with the head of a human. The most famous is the one featured in the story of Oedipus.

The Egyptian sphinx is regarded usually as male, although Queen Hatshepsut had one made with her face. The sphinxes of Egypt are benevolent as opposed to Greek’s malevolent. The one in Giza, Abu al-Haul (Father of the Dread) is thought to have had the face of Pharaoh Khafra but that has long disintegrated.

In fact, it’s yet to be proven if the Great Sphinx of Egypt is associated with Khafra. But what is known is that it’s the largest monolith statue in the world standing at 20 meters height and 73 meters in length (19 meters wide), it’s still not known what its creators called it. In the New Kingdom, it was called Hor-em-akhet, which means ‘Horus of the Horizon’. The word ‘Sphinx’ is Greek and was given to the statue in Giza 2,000 years after its construction.

As I posed Animal in front of it with the pyramids behind for a photo, a police officer said that I couldn’t take the shot with my mascot.

I scoffed and, as I usually do when it comes to people with a power trip because of uniform, I turned my back on him, took my photo, thanked him and walked off as he tried to ponder whether it was really worth chasing his belly after me in this heat to play to his ego which just took a beating.

I walked out and wondered how the government allowed the city of Cairo and Giza to be built right up to this most historical of places of the ancient world. I mean, there’s a golf link at the bottom of the complex.

It might explain how the Sphinx lost its face.