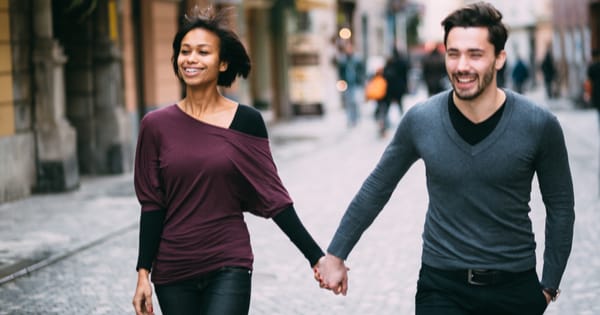 Prince Harry and Meghan Markle married less than one year ago, but tongues are already wagging about their alleged marital strife. One royal commentator claims the American actress is a “pretty difficult person” who is making her royal husband “miserable and glum.”

I hope the rumors of unhappiness aren’t true, but if they are, perhaps cross-cultural misunderstandings are the problem. It can’t be easy being a woman of color in perhaps the whitest family on earth.

Fifty years ago, only 3 percent of weddings were cross-cultural. Now that number has skyrocketed. Yet, although it’s encouraging to see “Love is love” put into practice, “Love is all you need” isn’t quite true. Tact, empathy, and patience are the essential ingredients for romantic success.

Markle is due to give birth to the couple’s first child any day. My baby gift to Prince Harry is some cross-cultural relationship advice: man-to-man, WASP-to-WASP, ginger-to-ginger. As a white guy who’s dated people across a mosaic of heritages, I’ve made tons of mistakes and learned even one insensitive misstep can destroy a relationship.

If I could speak to “His Royal Naughtiness” (as Diana liked to call her younger son), I’d say, “Harry, here are a few tips to remember so the Duchess of Sussex won’t make you sleep in the polo stables.”

1. Don’t presume you know her background just because you know her race. New York City-born Derrick and I met at the gym, bonding over a passion for running and free weights. After we began seeing each other, over dinner my African-American date and I began relaying stories about our childhoods. “I grew up eating fried squirrel, collard greens and poke sallet,” I said, explaining my dad was born into a poor sharecropping family in rural Arkansas. “Do you like country food, too?” I asked.

“Mother was a Wilhelmina model,” Derrick replied. He took a sip of water, then let out a sigh. “Dad worked on Wall Street.” We never went on another date again.

Lesson: Make no assumptions, especially about Meghan’s life experiences or those of her African-American family. Rather than falling back into easy stereotypes, lead with a sense of curiosity by asking open-ended questions, such as, “Tell me about your favorite foods.”

2. Just because you’re married to Meghan does not make you an “honorary African-American.” At a Shabbat dinner where most of the guests, including my fiancé Eddie, were Jewish I said lightly, “Now that I’m engaged to a nice Jewish boy, I guess that makes me an honorary member of the ‘Chosen People.’”

The others exchanged glances. “Um. No,” our sassy friend Judy joked. “You look like a Nazi.”

Eddie joined in. “Besides, in the 6,000 years since God spoke to Abraham, there’s never been a single Jew named ‘Courtland.’”

Lesson: Traditionally oppressed groups don’t find it funny when some Anglo-Saxon male claims membership after centuries of persecution and suffering. Harry, this is especially true for a guy whose ancestors once owned an enormous swath of Africa and were the ones doing the persecuting. Acknowledge the struggle is real. Be an ally, but if the “honorary” word is ever uttered, let it be said about you, not by you.

3. Meanings can get lost in translation, even in the same language. After dating for a few months, Cuban-born Augusto and I exchanged a good-night kiss before I jumped into a cab. “¡Adiós, gordito!” he said, which in his native tongue literally means, “Good-bye, fatty!” As a fluent Spanish speaker, I fully understood his words and stewed during the taxi ride across the city.

Once home, I rang my boyfriend. “How dare you!” I said and broke up.

The next day, Augusto brought me a dozen roses as an apology. “It’s a term of endearment. I call my mom ‘gorda’ all the time!” he said.

“Just because you’re rude to your mother doesn’t mean I’ll let you be rude to me,” I replied. Later, my friend Rosa, a cubana, told me Augusto was right. Some Latinx folks use the word in the same way my friends and family in the South call each other “honey.” I tried apologizing to Augusto, but the damage was done.

Lesson: Language is tricky. “Fat” and “phat” mean very different things, and differences in U.S and U.K. English mean that when Meghan tells you to put on some “pants” because you have 15 minutes before dinner with the Queen, she’ll mean “trousers,” not “underwear.” Opportunities for confusion—and fights—abound. Take a breath, ask for clarification, and when in doubt, reach out to a neutral party for a “translation.” Then, together you’ll laugh. Vive la différence!

4. Pay attention when she wants to share her culture. Simon was born in Hong Kong but moved to California as a teenager. He and I had been going out for a couple of months and were growing close. When he suggested watching his favorite movie, In the Mood for Love, during one of our “Netflix and chill” nights, I thought, “He’s moving too fast.” I suggested a different flick, knowing he’d acquiesce.

One night at Simon’s place, he had his beloved movie cued and ready. I stiffened. But, as the opening credits played, he explained the original Chinese title means “The Age of Blossoms.” I relaxed. This wasn’t a declaration of undying affection.

As we sat shoulder-to-shoulder on his couch, Simon paused the picture often, his voice full of nostalgia as he pointed out landmarks in his hometown. He made his own translations, highlighting the nuances and double meanings lacking in the subtitles. I loved the movie — and his comments made me feel like I’d been given a tour of a place I’d never been.

Lesson: Art is a bridge between people. Ask Meghan – and even ask her mom — to share favorite literature, art, and music. It’ll demonstrate you want to know more about their worldview. If it’s a piece you already know, ask why it touches your wife. You’ll learn more about her, which, in turn, will help your love grow stronger.

About Court Stroud and L Tong

Court Stroud lives in New York City, where he works as a writer and consultant.

Lorraine Tong is a marketing strategist to Fortune 500 multinational companies and start-ups. Previously, she was the director of digital and innovation at The University of Texas at Austin.

Facebook200TweetPinEmailShares200
wpDiscuz
2
0
Would love your thoughts, please comment.x
()
x
| Reply
Share this ArticleLike this article? Email it to a friend!
Email sent!