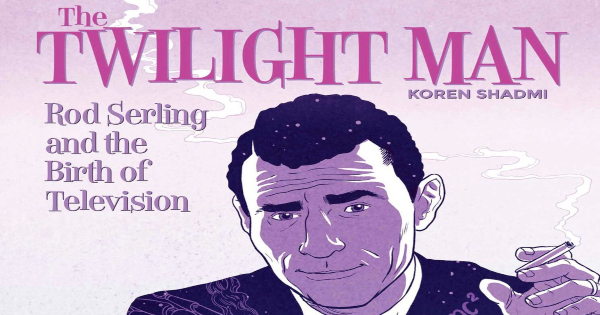 Hear about the life story of Rod Serling in ‘Twilight Man’

I was a teenager when I first saw The Twilight Zone. Each episode was clever, well made, had some surprising guest stars and always had amazing twist endings. So when I heard about Twilight Man I couldn’t wait to read it. I was able to get a digital copy of this graphic novel and this is my thoughts on it.

You can read the plot for Twilight Man here:

We recognize Rod Serling as our sharply dressed, cigarette-smoking tour guide of The Twilight Zone, but the entertainment business once regarded him as the “Angry Young Man” of Television. Before he became the revered master of science fiction, Rod Serling was a just a writer who had to fight to make his voice heard. He vehemently challenged the networks and viewership alike to expand their minds and standards—rejecting notions of censorship, racism and war. But it wasn’t until he began to write about real world enemies in the guise of aliens and monsters that people lent their ears. In doing so, he pushed the television industry to the edge of glory, and himself to the edge of sanity. Rod operated in a dimension beyond that of contemporary society, making him both a revolutionary and an outsider.

I found it very hard to put this graphic novel down. It told an amazing story about a man who helped bring a timeless show to life. Hearing the events that led him there was fun and exciting. He had his troubles along the way, but once the show got going it was wonderful to see it become a hit. To learn learn all about him and the legacy he left behind was a true joy. If you are a fan of The Twilight Zone then this is a graphic novel you should read.

Twilight Man comes out tomorrow. You can pre-order this graphic novel on Amazon and at Barnes and Noble.

Facebook2Tweet3Pin2EmailShares7
wpDiscuz
Share this ArticleLike this article? Email it to a friend!
Email sent!