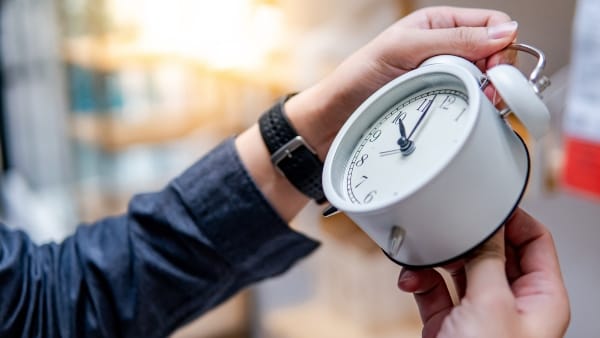 The concept of “daylight saving time” (DST), whereby we set our clocks ahead by an hour from mid-Spring through mid-Fall so we can get more done using natural light later into the evening, was first proposed more than 200 years ago by Benjamin Franklin as a way to save money on candles (!). While Franklin’s idea didn’t catch on back then, Germany instituted a “war effort” version of it to conserve fuel during World War I. The U.S. followed suit in 1918 but scrapped the idea shortly after the war ended.

DST came back to the U.S. during World War II when FDR instituted it year-round as “war time” between February 1942 and September 1945. After WWII, some states adopted summer DST but it wasn’t until Congress passed the Uniform Time Act in 1966 that it became standard across the country (initially Arizona and Michigan opted out; these days only Arizona and Hawaii don’t observe DST).

This past November, Californians voted in an extension of DST year-round across their state. The rationale is that the twice-a-year time change causes lost or poor sleep which leads to more accidents, aggravates existing health issues and has even been linked to a short-term uptick in suicides. Oregon and Washington are also considering aligning with California so the entire West Coast could be on DST throughout the year.

But according to a 2011 study of the effects of DST on energy use across the state of Indiana published in The Review of Economics and Statistics, such a change may not be good news for the environment. “Our main finding is that, contrary to the policy’s intent, DST increases electricity demand,” report lead researchers Matthew Kotchen and Laura Grant. “Estimates of the overall increase are approximately 1 percent, but we find that the effect is not constant throughout the DST period.” According to their data, DST causes the greatest increase in electricity consumption in the fall (estimates range from 2-4%) when dipping temperatures send Hoosiers inside earlier to turn up their thermostats. They estimate that increased energy demand as a result of DST adds ~$9 million a year to household power bills across Indiana while the “social costs” of the resulting increased emissions range from $1.7-$5.5 million annually.

Of course, mileage varies by region. A study by the California Energy Commission found that extending DST would have little to no effect on energy use in that state. Meanwhile, a U.S. Department of Energy analysis of 67 different power utilities across the country concluded that a four-week extension of DST would save Americans ~0.5 percent of electricity per day, or 1.3 trillion watt-hours in total — enough to power 100,000 households for a year.

Whether or not the recent interest in extending DST throughout the year on the West Coast will take hold across the country is anyone’s guess. In the meantime, we can all look forward to the second Sunday in March to spring ahead and leave the short and dreary winter days behind us — at least for a few months.

This post was previously published on earthtalk.org and is republished here with permission from the author.