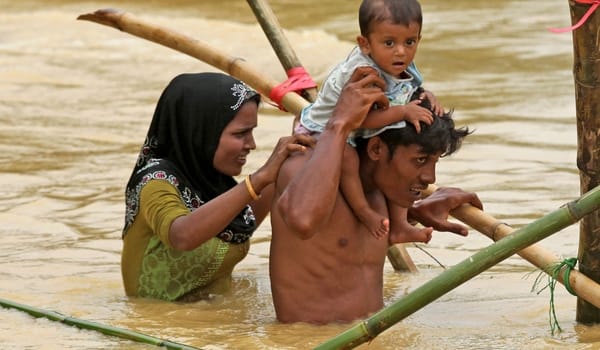 —
Today when 98% of the world’s population is busy worrying about climate change and the rest 2% arguing about it being a hoax; do you know how the affected countries are trying to deal with changing conditions?

Melting glaciers, increasing sea level, severe floods and drought conditions are changing lives of millions of people. But humans continue to find ways through it. No, it doesn’t imply that we should stop acting and being concerned about climate change. Right now, both mitigation and adaptation are necessary steps to be taken in order to save the future and the present.

One of the remarkable examples of adapting to climate change is Bangladesh. With melting Himalayan glaciers in the North and increasing sea level in the Bay of Bengal in South, Bangladesh, is a low lying country at the bottom of a delta plain where three rives namely, Ganges, Brahmaputra and Meghna converge and is highly susceptible to flooding.

In 2009, Aila Cyclone tore through Bangladesh destroying agricultural lands and flattening homes. With this devastation, the storm left behind enormous amount of salty water along the southern coast, inundating the agricultural lands. Rice is one of the most grown crops in Bangladesh, but with the land gone, they had to find a new source of food and livelihood.

With the support of World Bank funds, villagers switched to raising crops which could be grown in salty water and can be profitable. They started growing crabs and fishes and selling them in local markets. The business of aquaculture was quite profitable which lured in even those farmers whose lands not destroyed. They deliberately inundated their land with salt water to grow shrimps and crabs, which turned out to be a profitable but harmful step for the environment.

Salinity contaminated the groundwater making accessibility of fresh drinking and irrigation water difficult for the local people. Climate change does nothing but add to this problem. Cyclones are common, river flow has diminished and salt water from the Bay of Bengal is reaching farther up the coasts, travelling upstream and affecting the fresh water supplies.

To resolve this issue of unavailability of fresh water, villagers started harvesting the rain water and buying water from the market. But both the solutions were not long lasting, former being impossible to carry out during dry period in summer season and latter being too costly to afford.

A lot of NGOs working in the field of climate change came together and helped the people. They provided water tanks to make the process of rainwater harvesting easy and also invested in desalination plants to make the salt water of drinking quality.

The severe floods that the country faces cause a lot of devastation, one of them being soil erosion. The agricultural lands are completely eroded by floods leaving behind nothing but non-fertile land. But people have come together and found a little solution for this too. Farmers dig the eroded land, fill it with compost and grow pumpkins in it. Pumpkins can be preserved and can be sold during raining seasons, giving them income all year long.

It’s appreciable how people are trying to fight and are not giving up, but we can’t ignore the fact that if proper actions against this issue of climate change are not taken, low lying countries like Bangladesh will be erased from the map of the world.

This post was previously published on www.eco-intelligent.com and is republished here with permission from the author.
—
Photo credit: Shutterstock.com