Well, I never thought I’d find myself back here. Depression. I can’t tell you how much I fucking hate depression. It is a vicious, evil illness that grips so tightly that it is difficult to believe that it will ever let go. This is my third major depressive episode and after each of the previous two I thought I would never go back there again. Despite my experience of having overcome depression twice before, the illness takes hold so completely, so unrelentingly, that it is almost impossible to conceive of ever feeling happy and free again.

I wrote the above a few months ago, in the grip of an illness that I had hoped would never darken my door again. Everything that I have previously written about depression has been at a few years’ remove – this is the first time that I have written about it so close to the rawness of the experience.

Depression is like an alternate universe, where life goes on all around you while you are trapped behind a dark veil. Consigned to a hell on earth, wondering what you have done to deserve the anguish that defiantly refuses to leave you. An alien way of being, impossible to even begin to imagine when you’re not in that place, impossible to imagine ever feeling any other way once it has you in its grip.It was very hard – and painful – to remember who ‘I’ am. I had some of my happiest times right before this latest depression hit me like the proverbial tonne of bricks. Remembering that person hurt me so much. I missed him. I wanted him back. I wanted to feel the happiness that he felt. The gratitude for all of the good things that were in his life. And I wanted to be able to radiate that happiness to those around me that I love so much. 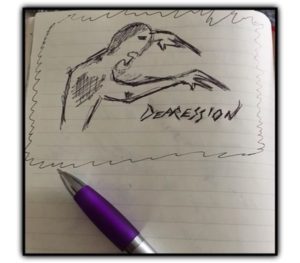 One of the most painful feelings imaginable is being surrounded by the love of the most wonderful people, while being unable to feel anything other than despair at the unrelenting emotional agony that you face every single minute. Feeling unbearably lonely, dragging along a crushing weight everywhere you go, through a world from which you have been cut adrift. Life contracted. I spent hours, days, weeks, feeling trapped inside four walls. Alone. Even when I was with others, fundamentally I was alone in the inner world that I was lost in. 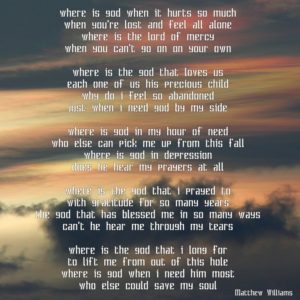 It’s so strange now to reflect back on that time, so recent and yet another lifetime ago, happening to a different person.

I spent most nights sleeping on my sofa, the only place I felt safe. I had a weird sense of fear at going upstairs to bed. I didn’t know why and I can’t explain it now, other than to say that a feature of depression for me is a sense of latent, undefined terror that doesn’t leave me alone. It doesn’t have a particular direction but it can alight on any scenario and convince me of the dreadful things that lay ahead: losing my job; not being able to look after my children; losing the love and support of family and friends who, despite their best efforts, can’t lift me up and fight this battle for me; losing my home and ending up on the streets, woefully unequipped for the harsh reality of having nothing and nobody.

During my illness there were a number of things that I lost: my sense of self; my confidence; faith, and words. I was able to write a few pieces that managed to capture some of this. 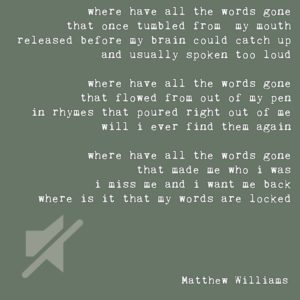 In total this depression lasted four months, almost exactly the same duration as my previous episode in 2013. It felt like forever. One of the strangest features of depression, and one of the most difficult to endure, is the effect it has on time. It’s very hard to articulate this and I’m not sure I can. Time stops being fluid, instead it becomes a thick, heavy mass. There is no past or future; past experiences, achievements and happiness belong to somebody else, only the shell of whom remains. The mind of what is left repaints past memories, adding shade and twisting them to leave distorted, ugly reinterprations. The future promises only misery and pain. With any hope of recovery strangled, the future offers not salvation, only deterioration. All that is left is the present, the nightmare now, where every minute is an hour, every hour is a day, and every day is a lifetime. A slowing of time that is compounded by an inability to enjoy or focus on anything, where simple pleasures – reading a book, listening to music, watching a film – are pointless. Where all that is left to look forward to is sleep. 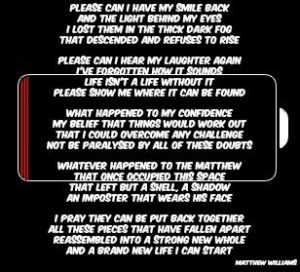 I don’t know why depression came back, I can’t point to a particular trigger. My best guess is that it somehow resulted from coming off my tablets last July. Neither can I say exactly how I recovered. But I did. I believe that there are a number of things that together helped me to endure until I would reach the day – a day that for much of the time I didn’t believe existed – when the cloud would lift.

So many people offered support and sent me kind messages to encourage me, leaving me in no doubt that I am cared for and appreciated. But I isolated myself from everybody, unable to be the person that they knew, unable to tell them what they hoped to hear – that I was feeling better. I did appreciate every message and have since made sure that I thanked everybody that reached out to me.

One of the things that I found very difficult to come to terms with after my previous illnesses was how I had felt abandoned. Now, I see things differently. Being around somebody that is experiencing a severe and prolonged episode of depression is very, very hard and can leave loved ones feeling hurt and helpless, especially when you push them away. Depression doesn’t just affect the sufferer and those that are caught in the ripples have to find their own ways to cope in the best way that they can. In my case my recovery is as much for them as it is for me. It is especially for my parents, who have supported me in ways that I will never, ever forget. I wouldn’t be where I am without them. It is for my children, who now have their dad back.

I have always believed that life’s difficulties offer us opportunities to learn and that better things can come out of adversity. So many things that have happened to me in recent years have reinforced this belief. When depression took hold again it was impossible to see what good could come out of it, but it did.

Which brings me to faith. As my depression dragged painfully and slowly on, a voice eventually grew inside:

‘this cannot be what is meant for you, you can’t be here only to have all of your blessings stripped away by illness. There must be some greater purpose for this, a better future beyond it.’

Although I couldn’t put my finger on what exactly caused my depression I had a strong sense that I needed to change direction. I have been fortunate to have had a brilliant job in boxing for 11 years, enjoying many wonderful experiences that I will be forever grateful for. But it was time to move on. As has happened so many times in my life, the right opportunity came along at exactly the right time. It all happened very quickly and things fell into place. I was far from well and my brain wasn’t functioning at anywhere near 100%, but somehow from somewhere I was able to find the words to convince the interview panel to offer me the job. I am now proud to be working for a mental health charity where I am passionate about being able to make a real difference.

And then it arrived, a few weeks into my new job, the day that I felt alright. Like my descent, my ascent was quick and it wasn’t prefaced by any particular thing. Just the realisation that, ‘you know what, I feel alright today.’ Not happy, not better, not ‘me’, but alright. The corner was turned. Over the following days my smile came back. Office chat and random tangents. Joy in the simple things. 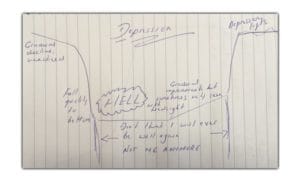 I came back.It’s funny how things work out isn’t it?

Now, I look forwards. And for the first time in a very long time I look forward to a shared future. The timing of this depression was particularly cruel. After four years of stumbling through dating, at new year I met someone; a wonderful woman, beautiful, funny and kind. And almost as soon as I’d met her, depression snatched me away.

Except it didn’t. She wouldn’t let it. Although we had only been dating for a few weeks when depression robbed me of me, it didn’t rob me of her. She stuck by me and she was there every step of the way. It takes a very special person to do that and for all that depression took away from me for that four months, ultimately it has shown me just how lucky I am for what life has given to me. 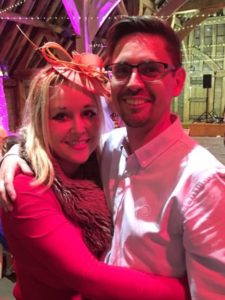 A version of this post was previously published on lovelaughtertruthblog.com and is republished here with permission from the author.