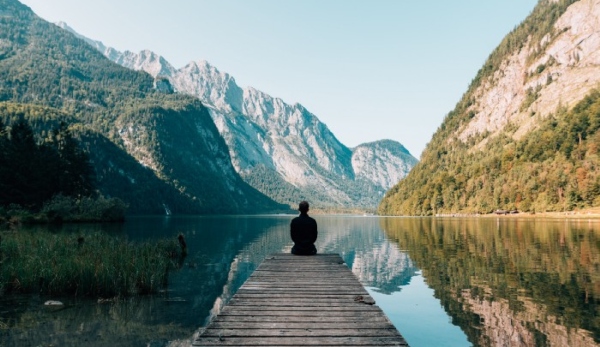 For as long as I’ve been on this Earth, I’ve been neurotic and introverted. I once got an 100% neurotic result on a proper, 45 question-style questionnaire on the matter. I’ve suffered with mental health issues because of my neuroticism. But I’ve also found that my neurotic impulses have helped me achieve things that I wouldn’t have if I were less self-aware and anxious.

I’ve struggled in relationships. I don’t think I’ve ever managed a relationship that got to the really serious stage; my longest was three or four months.

I’ve never been able to live with a partner; I could live with friends, but that was because I had my own bedroom to retreat to. At the end of a stressful day, I would draw comfort from the fact that I had my own private space, my “me” time, separate from the outside world. A few years ago, I lived with two horrible housemates who bullied me. They would enter my bedroom when I didn’t want them to. So I stacked furniture up against my door so they wouldn’t get in.

Then, I met Rory. I fell in love almost instantly. I walked into the Middle Common Room of Norman Castle (the property of Durham University, where I did my undergraduate and postgraduate degree) and blathered on about some random nonsense to its inhabitants. There was me and two others in the room. I knew one of the men, but didn’t know the other — his friend — a quiet and Stoic boy. I took an instant liking to this handsome stranger, and I asked him out on a date (something I had never dreamed of doing before, but I liked him so much).

After we started dating, my housing situation became catastrophically bad. I was renting a room in a house owned by a live-in landlord who was about a decade older than me. There was me, another girl, and him. He was on the top floor, and we were on the middle floor. It was very cheap, but he told us that he would mainly be on the top floor, doing his own thing, and he had a cat — which meant I thought it would all be fine (and I love cats).

It wasn’t. He turned out to be a former anarchist who the police had on a watch-list. He would wake up at 3pm every day, and gleefully announce that the revolution was going to happen today. Every. Damn. Day. I told him that, if the revolution was going to happen, he would have missed it because he woke up so late. He also left a trail of jelly beans from my room up to his and asked me to marry him in exchange for rent.

I told my boyfriend about this, and he wanted me to leave immediately. The problem was that I didn’t have anywhere to go — so I moved in with him. At this point, we had only been together for around two months. Yes, it was crazy. But it did indeed work. We still live together, in a different town, after leaving university. Conversely, though, it tested the identity I had fostered around being alone.

I hadn’t realized, before, that my identity was so centered on being by myself. It was focused around me as a person; the hobbies I had, the things I liked and didn’t like. My understanding of myself was centered on me and wasn’t much to do with others.

At first, I craved time alone. I had to ask for “Lizzie time”, fearing that my partner would think I didn’t like him anymore. He struggled to understand. I was — and still am — an immensely introverted person. I had constructed my identity around myself as a singular person, rather than as part of a unit.

I remember my partner telling me something about how, when asked about their identity, people from broadly-construed “Western” societies tend to describe themselves, when asked, around their own hobbies or interests. But people from broadly-construed “Eastern” societies tend to frame their sense of self around their relations with others (“I am a father”, “I am a husband”). Put simply, I was an like an extreme Westerner.

I don’t think that this makes me a selfish person. A lot of it is to do with the way I was brought up, my family dynamics, and the sexual trauma I suffered as a teenager. I folded into myself a little — I contorted myself. But this doesn’t work in a relationship. My boyfriend voiced concerns about how distant I seemed. Later, he told me that he worried that I would ever be able to feel a kind of unity with him.

A few months in and I started to see myself as one half of a unit, rather than just an individual. But I started to lose my sense of self. I realized that I had to do something to maintain my strong sense of self while fostering a feeling of unity with my partner. I was adamant that I would not subsume my identity to become part of a whole.

I struggled with adjusting to having a partner, having another half. I’ve always seen myself as a whole. I managed to adjust through trying to keep hold of those aspects that make me…well, me. I hung onto hobbies and friends that I had before I met my partner. I threw myself back into writing, drawing, and all things arts and crafts.

I found that hard to do at first. I wanted to include my partner in everything; I wanted to be around him all the time. I still do, but we live together now, and so it’s different. I am around him pretty much all the time, and so I’ve found that doing my own thing gives me a welcome break — because of my introverted nature, I really need to have my own space sometimes.

I’ve set up the spare room in our flat as a little writing room, and use that to have my own time away from anyone else. In that room, I can be by myself. My partner has put his weights and gym equipment in there — so in the daytime, I use it as a writing room, and in the evening he uses it as a workout room. It’s a happy marriage in understanding each others’ needs and spending quality time together. It works for us.

Don’t get me wrong: I’m still working out how to be a unit and an individual at the same time. It’s tough at the best of times, for naturally extroverted people. I’m someone who was defined by their individuality, and a lot of that is about being an individual. I’m still working out how to be part of a unit — or, as my mum says — an effective team. Being part of an effective team doesn’t mean that your personality is subsumed into some greater thing, but that you and your partner can work together, effectively.