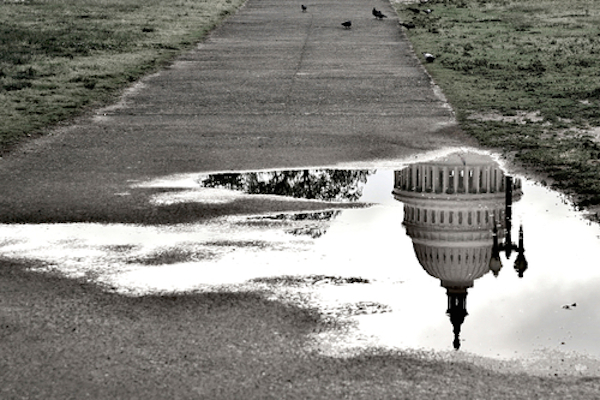 The President, Vice President and all civil Officers of the United States, shall be removed from Office on Impeachment for, and Conviction of, Treason, Bribery, or other high Crimes and Misdemeanors. — Article 2, Section 4

Step one: the House of Representatives by simple majority passes Articles of Impeachment, laying out the alleged offenses of the impeached officeholder. Step two: the trial is held in the Senate. In the case of the president, the Chief Justice of the Supreme Court presides, otherwise the President of the Senate aka the Vice-President. (The Constitution does not specify; inferring it would be the usual presiding officer.) A two-thirds majority is required to convict and remove from office. Conviction by the Senate does not disallow criminal prosecution.

Vice-President Tyler came into office when President William Henry Harrison died only a month after his inauguration. A House member proposed a resolution to form a committee to investigate the President and lead to impeachment for “arbitrary, despotic, and corrupt abuse of veto power.” Tyler had offended the House by vetoing bills that would have lowered tariffs. Even so, the House quickly voted down the resolution.

Johnson became president with the assassination of Abraham Lincoln. Although his home state Tennessee seceded at the beginning of the Civil War, Johnson stayed with the Union, the only senator from a Confederate state to do so. This did not mean Johnson wasn’t racist. Using presidential proclamations he effectively ended Reconstruction. He issued pardons and amnesties to former Confederates and opposed the Fourteenth Amendment which gave citizenship to former slaves. His firing of the Secretary of War precipitated impeachment for violating the recently-passed Tenure of Office Act, and for bringing “disgrace and ridicule on Congress.” The Senate came one vote short of conviction. He failed to gain the Republican Party’s nomination for president but returned to the Senate a few years later.

Watergate and all its attendant major and minor scandals gave the impetus for Congress to pass articles of impeachment. A few decades too early for Mitch McConnell to save him, Nixon resigned before the Senate began his impeachment trial.

An inquiry into a failed Arkansas deal morphed into Kenneth Starr’s peering into the President’s sexual adventures. The “Starr Report (Official title: “Referral from Independent Counsel Kenneth W. Starr in Conformity with the Requirement of Title 28, United States Code, Section 595(c)”) published in salacious detail the investigation leading to Bill Clinton’s impeachment. Brett Kavanaugh was largely responsible for writing the report. (Kavanaugh’s prose sent many of us to the dictionary and now we know the correct spelling of “prurient.”) The House voted to impeach. Senate Republicans entertained the nation with comically infuriating displays of moral posturing and petty malevolence. In the end, they could not muster even a simple majority, much less the two-thirds necessary for conviction. Clinton appeared properly contrite and ended his eight years in the White House with higher-than-ever approval ratings.

A delicatessen owner, an insurance broker, a berry picker, a father, a published author, and blogger as well as a life-long Left Coaster.