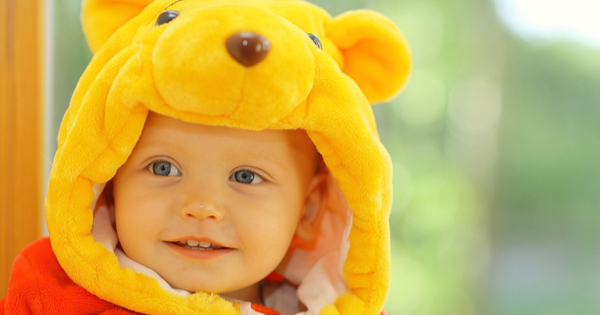 And don’t you know that God is Pooh Bear?

– Jack Kerouac, On the Road

Have you ever experienced an event that struck you as a bit odd at the time—and then something else happens later and you look back on that original event and can’t help but wonder if the two events are connected in some way?

Some call that a coincidence. But for me, in light of all that happened around the time of my husband John’s death, I often wonder if some of the seemingly random events were connected?

On Friday, September 22nd, 2000 John and I spent a spectacular day together at Disneyland. We’d attended a friend’s wedding in the morning and then had the rest of the day to run around Disneyland like a couple of over-sized kids. We had a wonderful time.

When the time came to watch the fireworks, we were standing on a curb waiting for the show to begin and we happened to notice an entire family—Mom, Dad, two kids and Grandma—all wearing matching yellow Winnie the Pooh jackets.

But then, just before the fireworks started, Pooh Grandma decided to walk right in front of us— and promptly collapsed, landing on her back. John, being a police officer, immediately knelt down to help her as I ran off into the crowd calling for help.

When I returned, John was still kneeling beside her, holding her hand and comforting her. She was breathing but not conscious. The paramedics arrived and as we were walking away, John looked at me said, “Wow, did that lady ever hit the back of her head hard.”

“Things like that,” I said, “aren’t supposed to happen at the Happiest Place on Earth.”

Then, exactly one week later—September 29th—back home again in Canada, John fell through an unmarked false ceiling into the lunchroom below, hit the back of his head and died of brain injuries.

A few days later, while tackling yet another devastatingly difficult task—choosing John’s grave at the cemetery—I found a plot I thought was suitable and then closed my eyes a moment, just to get a feel for it. When I opened my eyes again, I turned my head to the right and there, four plots over, was a yellow Winnie the Pooh carved into a young woman’s headstone. I breathed in sharply, suddenly remembering the Pooh family at Disneyland.

Two months later, I went for lunch with Lil, the police officer John was partnered with the night of his fall. She shared with me the details of John’s last shift. When she got to the part about finding John on the lunchroom floor, she told me how the K-9 officer and John’s Sergeant and teammates had stayed with him until the paramedics arrived, comforting him as best they could.

“You need to know,” she said quietly, “that he was with people who loved him.”

I thought back again to Pooh Grandma at Disneyland and how John, a stranger, had been there to comfort her.

Then on the third anniversary of John’s death—September 29th, 2003—Lil was working and went into a flower shop to buy flowers for John’s grave. Noticing Lil’s uniform, the woman behind the till commented, “My daughter is buried near a police officer.”

“I’m not sure if it’s the same officer,” said the woman, “but my daughter’s gravestone is the one with Winnie the Pooh on it.”

And that is in a city of more than a million people. If it’s just a coincidence, it’s a dandy.

Now that nearly two decades have passed since John’s death, when I think back to the Winnie the Pooh incidents, I realize that whether they were unrelated coincidences that my anxious mind needed to connect—so as to find meaning in the unacceptable—or whether they really were somehow connected doesn’t much matter.

Maybe what matters most is that connecting the dots into some sort of meaningful pattern, real or imagined, helped me find peace during an extremely difficult time. Because that, I have learned, is a very important part of the grieving process.