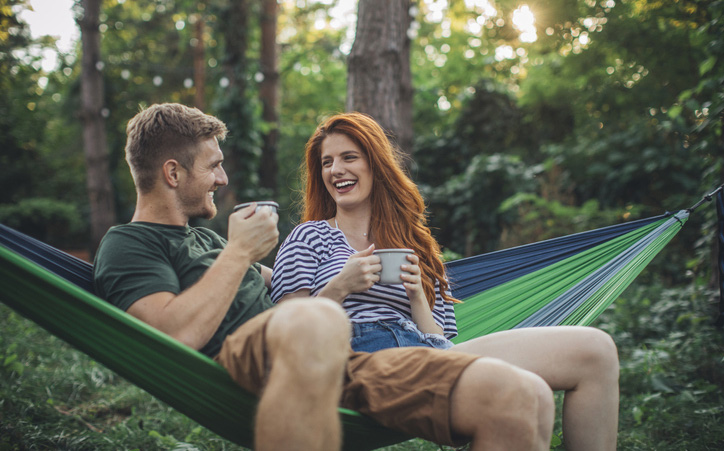 Guys, it’s time to let “you’ve got a great smile” die. But don’t worry, we’ve got some new ideas for you.

1. Complimenting a woman you’ve just met on something she’s done or achieved shows her that you’re about more than just physical appearance.

Not only does this set you apart from all of the other “you’ve got a great smile” guys, but it actually shows a little bit about who you are as a person, too.

2. A genuine compliment about something other than looks reduces the risk of a making a woman who isn’t interested in you feel harassed.

The moment you compliment a woman on her beauty, body or sex appeal, it’s hard to get back to a place where you’re just being friendly. She’s either going to respond in kind (if she’s interested in you romantically, too), or she’s going to feel uncomfortable that you went there.

A compliment on something other than looks will allow you to keep the conversation from entering that dead zone where you know she’s trying to figure out if you’re a creep and how quickly she can make an exit.

3. You have more of an opportunity to get to know her, to see if you’re actually interested in the first place.

It doesn’t matter how physically attractive she is, we all know that real chemistry comes from something deeper. If you’re focused upon giving compliments on her appearance, you’re probably not paying close attention to the person she is.

Giving compliments on things other than her looks requires listening closely when she talks about her life and her work. Asking questions about her interests and things she’s proud of will not only offer you opportunities to compliment her creatively, but it’ll also give you a quick inside scoop into whether she’s a woman you’d actually want to spend time with.

It’s easy to go for the low hanging fruit. Many women are so used to hearing compliments from guys on how they look that it becomes boring. You never hear jokes about cheesy guys approaching women and saying, “Hey, that’s an impressive Master’s Degree you have there, woman. Why don’t you whisper in my ear about the research you discovered when you were writing your thesis.” (Hint: Don’t ever be that cheesy, even with genuine compliments!)

That’s because cheesy guys don’t care about that stuff, they only see the face and the body. If you’re not like that, prove it by doing some work. She’ll notice.

5. Non-physical compliments are an opportunity to say something nice while showing more of who YOU are.

Saying “You’re pretty” is more about them. A non-physical compliment is about you and them. It gives her a peek into the things you’d be able to talk about if you guys spent more time together, and offers her some insight into whether she’d be attracted to your mind an soul, not just your body.

6. If you’re already in a relationship with a woman, it shows you value her for more than a trophy or a sex object.

You love her laugh, her insights about your work problems, the way she cares for her friends or the kids. Tell her how hot it is when she fixes the broken sink. It doesn’t matter what they are, tell her what you love about who she is as a person.

When we started writing this list, we both asked our friends about the worst pickup lines they’d ever received. A few of the white women mentioned having guys call them “thick” – and we had a discussion about the ways in which that word can be a compliment or an insult, depending upon its use and your culture.

What is considered attractive and what is considered a compliment differs from culture to culture AND person to person. Don’t be that guy who assumes everyone thinks like you do. We all have blind spots. Using non-physical compliments will held you avoid sliding down this slippery slope.

Speaking of terrible pickup lines and compliments that are bound to insult a woman or create misunderstandings, here are a few non-compliments guys have mistaken for compliments in the past.:

Stick with “You’re great at that” or “You’re really funny.”

A guy actually once said to Joanna, “You’re way more intelligent than you look” after meeting her in a bar. He thought it was a compliment. She did not see it that way. In fact she laughed… hard… at him.

Stronger, smarter, funnier, richer… it doesn’t matter. This set-up is doomed to fail.

Guys, try dropping your expectations of women. Sure, we all pre-judge people to some degree. That’s human. But if you have them, please don’t say them out loud.

If you tell a woman you didn’t expect her to be a doctor, she’s going to wonder what it was you DID think she’d be. It’ll sound like you assumed she’d be dumb, or uneducated.

If you say you didn’t expect her to be a mom, or an athlete, or anything else, you just look rude and are setting yourself up for miscommunications.

Here’s how you too can be spectacular in complimenting in creative, thoughtful ways:

Keep your hands to yourself. Don’t touch people you don’t know. Not even on the elbow. Smile, laugh, Flirt. But don’t presume the right to touch a woman.

Watch her facial expressions and body language for signs that she isn’t interested. Is she turning away? Looking for her friends? Are her arms crossed over her chest and her eyes somewhere other than your face? She’s probably uncomfortable or done talking to you. Tell her you enjoyed meeting her and walk away. If you stay somewhat close by and smile at her warmly a while later, she’ll make contact with you again before she leaves if she was interested.

Don’t be so damn overt in stating your interest before you know something about her. If you’re quick to say “I’m interested!” before you’ve had an actual conversation, it’s pretty clear what your intentions are. Don’t be that guy. It’s not a good look. Take your time and learn more about her as a person. That way if you say you’re interested, she might actually believe you.

Don’t overestimate your importance. Seriously, bro, you’re not the only guy she’s going to talk to in her lifetime, and you’re probably not her future husband. If you go into every interaction with women like you’re God’s gift to women, you’re going to come off as an asshole, not someone she could actually care about.

Don’t stare at her chest. Breasts don’t speak. This advice is as old as the hills, but somehow we need to keep telling men this. Can we knock this off already, guys?!

What is the worst thing a guy has ever said to you when he thought he was giving you a compliment?  Answer here in the comments or tweet them with the hashtag: #noncompliments.

One guy said to me, “I have to admit, you’re way more intelligent than you look.” #NonCompliments with @ImDrTee

I got one last night. “You’re divorced? I don’t get it, you’re actually pretty.” I let him on there are other reasons for divorce besides the ol “my wife was too ugly” #noncompliment

Good thing I looked this up before sending a message to that girl from my class. x)
I just wonder why it looks like she is into me… Even if she was, would her feelings for me vanish in no time just by complimenting her, let’s say, profile picture? I’d like to learn more about that. ^^’

why is it, when i have ventured into trying these sorts of advice, i often get a worse reaction than trying the supposed rude way.

Worst pickup line I’ve had, and I shit you not, was a guy at an all night diner at four AM on a Saturday, saying “Can I squeeze your fun bags?” and looking genuinely confused and shocked when I told what he could do with himself. He was not drunk, did not appear to be high, or at least not excessively so. He was sincerely perplexed that I found his pickup line rude.

Wow. I’m sorry you had that experience!

I am a complete noob at face to face approaches of women, I haven’t really made any in the last 10+ years due to extreme social anxiety. A lot of this advice is good, thank-you. I do have some confusion though. “A compliment on something other than looks will allow you to keep the conversation from entering that dead zone where you know she’s trying to figure out if you’re a creep and how quickly she can make an exit.” If your goal is to approach a woman for dating, then would a lack of complimenting on their looks make… Read more »

Thank you, Archy,
Pointing out the usual double-standards of dating. You shouldn’t be attracted to a woman on first sight (no matter how much time and effort she put into that first appearance), because then you are just shallow. But trying to take your time and getting to know her, you are instead written off as just wasting her time.

Yup, my friends are telling me I should have asked for this woman’s number sooner as someone else has probably beat me to it. I was definitely interested in her!

thank you!! This article puts into words exactly what I deal with all the time. If a guy compliments me on my looks he just reminds me of all the guys on street corners whistling and catcalling. Gross.

So nothing about complimenting men.

This is actually and article about women.

I think men need to be complimented more.

I think everyone needs to be. And doing it in a thoughtful way shows that you;re paying attention to the person in front of you.

Men should be complimented on something other than their money.

Haha. Okay. We will take note.

In fact, we already have!

I rode the subway back in HS and a university student asked a question about a book I was reading (I think it was Henry James)…it just sparked a really interesting conversation about the short stories and when his stop came up he just gently touched my arm goodbye…That is rare occurrence on the train: intelligent conversation…most of the usual encounters are just leers, men standing too close, and trying to grope…

“Not all women are looking for a date.”

But I’m never really going to know if I don’t ask. Even the ones who ARE looking for a date often don’t really advertise it.

FacebookTweetPinEmailShares8.3k
wpDiscuz
19
0
Would love your thoughts, please comment.x
()
x
| Reply
Share this ArticleLike this article? Email it to a friend!
Email sent!