Cold feet is a term commonly used to describe the doubts a person has before getting married. However, “cold feet” is also used to gaslight people from listening to their intuition and the warning signals they’re picking up on.

Often, people are told they have “cold feet” as a means to wave off valid hesitations they’re having so that they can overcome their gut instinct by soldiering through, and making the wrong decision.

This is inherently dangerous.

When you feel something is wrong, that’s because you’re right, it is. Having ‘cold feet’ is your intuition’s last-minute attempt at saving you from making a big mistake. People tend to forget that last part.

If you’re afraid to take the plunge it’s because it’s not the leap of faith you should be making. Although this choice is yours, make no mistake about it, it will impact the rest of your life. Especially if you make the wrong one.

Over the past four and a half years. It was Darren’s first relationship, and first real love. The relationship was immediately marked by abuse and mistreatment.

Alison cheated on him two months into the connection and made him promise not to tell anyone. He was suffering in silence as she went on to spend the next four and half years being—

Abuse tactics like separating him from his home, his female friends (including me), and his family. She would also break up with him as a test to make him “prove” his love for her.

It didn’t take long before she started pressuring him for marriage. She temporarily broke up with him for not being ready, to scare him into doing it with the threat of “losing her”.

One day we got into a conversation that bothered me.

Apparently, they attended the wedding of a mutual friend last year and were asked when they were planning on tying the knot. Upon leaving the venue, she began crying in the car and accusing him of stringing her along.

He admitted to me he didn’t want to marry her

He had been having doubts for a very long time. At this point, the abuse had taken such a serious toll on him that he felt it would be a mistake but was too afraid to admit that, out loud or to himself.

He wanted her to be “The One”.

So, he got a “real” job because she didn’t support his career as a musician and a junior pastor) so that he could save up for a ring and prove he was a “real man”. He was waiting for things to get better and initially chalked it up to “cold feet”.

The abuse continued until she broke up with him for the final time this past February. This time he didn’t take her back — nor did he chase her either. He’s been on the slow and steady road to healing ever since.

His health is improving, he’s repairing the connections with those he’s neglected, and he dedicates more time to his band and has even led sermons. He’s been getting his life back. He’s also expressed his extreme relief at not marrying her.

He admits that he would have made one of the biggest mistakes of his entire life had he fallen into the pressure. He came to realize he didn’t have “cold feet” —

His heart was speaking to him.

You Cannot Keep a Person

Photo by Dainis Graveris on Unsplash

Who believe marriage is the final step to solidifying a relationship. Who believe that making a marital vow is the true testament to one’s commitment, dedication, and the real measure of their love.

But why do we need the commitment of a ‘marriage’ to love someone? Why is this such a popular condition in so many relationships? What’s really the point?

The only difference between dating and marriage is you are legally being bound to someone in the eyes of the law. Marriage ultimately doesn’t change anything but your name, your finances, and the legal rights to your freedom.

Let’s be very clear, you weren’t designed to be “kept”

Alison knew Darren was a good man and didn’t want to lose him, but after cheating on him she couldn’t handle the fact that the ball was always in his court.

As a result, she played an endless amount of games to keep the upper hand. The problem was, as I mentioned before, she was dating a good man. Darren wasn’t playing any games. He simply loved her.

I couldn’t help thinking of how many people who are in his situation don’t get as lucky as he did, because they do get married. Despite struggling with their own truth. How many people talked, or threatened, them into it?

How many people are folding under the pressure of someone else’s life plan? Having been convinced they’re just suffering from “cold feet” when the reality is some part of them knows they shouldn’t be getting married.

In some cases, you both know it’s not working and that it’s already over. Legally binding yourself is never going to change this dynamic,

It takes more effort to make a toxic relationship work

Most couples should’ve broken up a long time ago. Especially, many couples currently heading toward marriage.

Looking for a higher level of commitment when the current commitment you already have isn’t enough to sustain you is pointless. What your connection needs healing — not a wedding.

Yet, this tends to be exactly when most couples turn to marriage as some sort of resolution for their problems. Marriage is often used as a bargaining chip. In the same way, it was used as a weapon to keep “Darren”.

But the weapon will not prosper, and why would it? If things are not flowing naturally then applying the pressure of marriage won’t fix anything.

Which is why if you’re getting married to —

It will never work.

Remember, the marriage didn’t cause these issues.

Therefore, that’s not where their solutions lie.

Getting married will never repair —

Why would getting married work, if your efforts haven’t? Why would being legally forced to stay together be the solution when actually being together, as is, isn’t working?

You have to realize that love is not the motivating factor here. It’s pressure and it’s about keeping you (and maybe even about you keeping them). The false sense of security marriage imposes guarantees neither one of you anything.

That false sense of security is all smoke and mirrors. This is because people change, things happen, and very often stuff just doesn’t work out. Being legally bound will not spare you from the harsh winds of change.

What you’re looking for is permanence where there can only ever be temporary. Marriage cannot place a “forever” band-aid on a temporary connection.

The reality is it takes much more effort, time, and energy to make a toxic relationship work. In fact, it takes more work when it’s not supposed to work.

Your Intuition Is Not Lying to You

Here’s why there is no such thing as “cold feet”

Often, one or both parties know the relationship isn’t working. Some of you knew it was over once marriage was thrown on the table because a wedding is not what’s been missing.

What’s missing is a resolution to your problems. Opting for an extreme is basically like admitting things are not working and in some cases, you both know it’s already over.

For you to be reading this article, you’ve been asking for signs regarding what decision you should make. And you have received many, such as

Your intuition has not been lying to you.

If the thought of being married is causing you anxiety and feels off, believe what you are telling yourself. Stop gaslighting your intuition. This is not “cold feet”. Do not believe what others want you to believe.

You do not have to settle for a specific format of life just because everyone else is doing it. This life you’re living is your life. Many people will encourage you to make a mistake that only you will have to deal with in the long term.

Make no mistake, the choice is yours, and it will impact the rest of your life and mental health — especially if you make the wrong one. Just because it might be what they want does not mean it’s what you need. Nor is it likely to be the healthiest choice for you either.

Legal papers are not the solutions for —

When love is healthy, there really is no use for marriage.

When it’s natural, nothing tangible needs to solidify it. Marriage is not the end-all, be-all for a relationship when the stability isn’t reliant upon —

Because your commitment doesn’t have to be legal to be real.

The better commitment will always be the one you make to yourself. Trust what you feel because those feelings are leading you to whatever is in your best interest —

Even if that’s not your partner.

LS is a full-time writer and part-time wanderer. She graduated from Hunter College with a degree in Creative Writing. She lives in New York City with her betta fish Daphne. 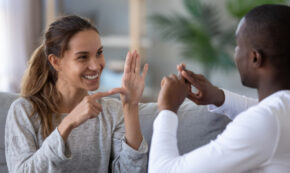