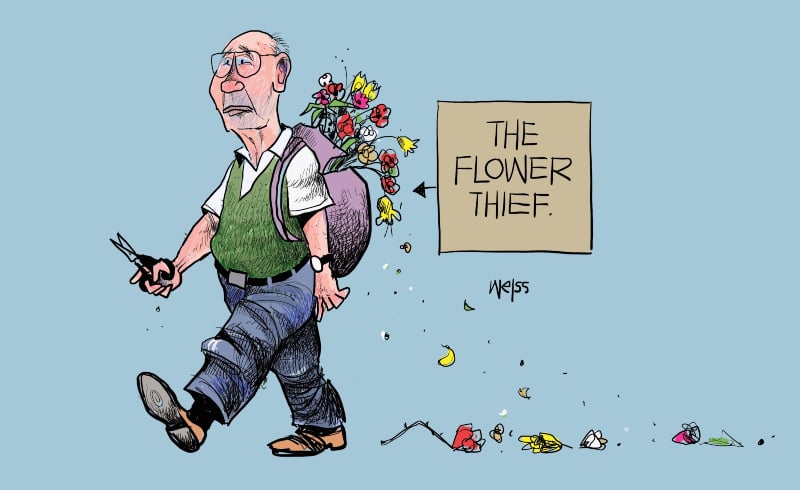 Sergeant Peter Jensen had been with the Rockport Police Department for sixteen years, but he’d never seen a case like this. For the last two weeks the calls came in from all over town.

Always the same thing. An angry homeowner or gardener. Insistent that the police get to the bottom of it. After all, the spree of thefts had merited several newspaper articles. The theft of flowers, to these victims, was a serious crime!

There was Mr. Jacobs and his dahlias. He was a fastidious gardener. He didn’t know who snipped off so many of his prized possessions, but he wanted blood.

And of course Mrs. Idleberg, whose beautiful roses vanished in the middle of the day. “You must investigate this,” she said in her Latvian accent, “because those roses…they were my babies.”

Sergeant Jensen couldn’t believe his luck. Of all the crazy cases to get stuck with. Really? Flower thefts? The other cops on his shift did what cops do. Teased him relentlessly. Sergeant Jensen found flowers in his locker. On his desk. One day he even found some rose petals in his uniform pockets!

Walter Higgins’ long career as an English butler prepared him well for Essex House, the Rockport bed and breakfast that he and his wife Mary bought eight years ago.

Walter’s mother had passed away and left him a sizable inheritance, which he used to leave Britain and begin a new life as owner and operator of Essex House. Mary was an excellent chef and Essex House became known as one of the finest B&Bs in town.

Having been a professional butler, Walter was a stickler for details. Beyond the immaculate rooms, hallways, linens and fine dinner wines, Walter knew the power of a little color. Which is why he hired a top gardener to encircle Essex House with magnificent flower beds.

Walter’s eye for details is what led to a break in Sgt. Jensen’s case. “Last night around 6 pm there was an elderly bloke with a backpack outside,” Walter told Sgt. Jensen. “I went and asked him if he needed any help. The man looked at me and said, ‘Don’t send me flowers when I’m dead. If you like me, send them while I’m alive.’ And then he walked off.” 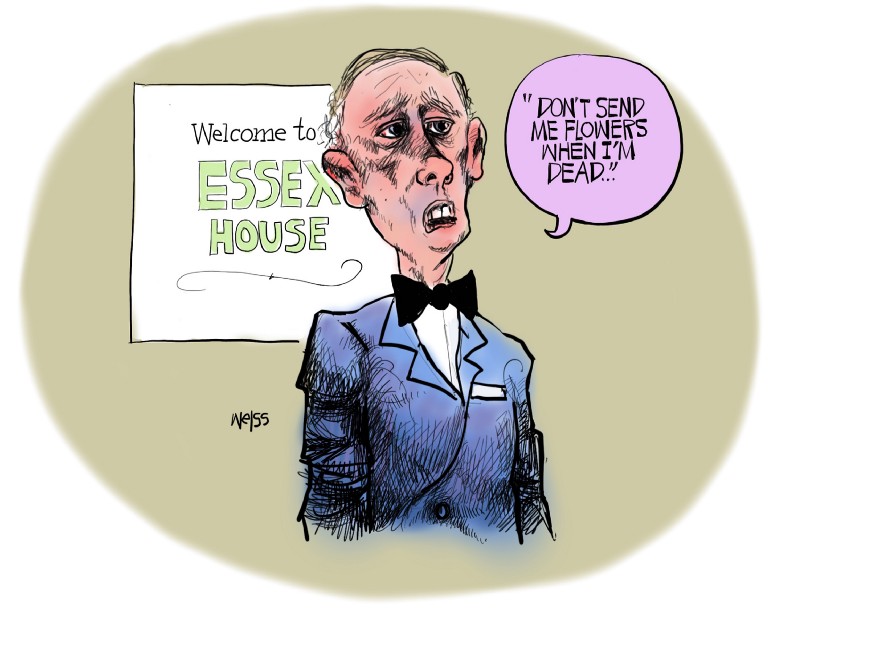 “I recognized the line he quoted. It’s from Brian Clough. An English football player and manager. And one more thing. When he walked away, I saw one of our roses dangling from his backpack.” Walter’s eyes twinkled, clearly pleased with himself. “Do you think this is your flower thief?” Walter asked.

“Let’s get our composite sketch guy to come over here and work on a drawing from your description. He’s self taught, but pretty good. Once done, we’ll post it around town. And thanks for all your help,” Sgt. Jensen said.

Maria Contreras liked working at the Oceanview Residential Community. She had a soft spot for the elderly and a reverence for the grace and dignity of the greatest generation.

One resident in particular had broken Maria’s heart. Esther Steinberg. Esther had been an art teacher who specialized in working with developmentally delayed children.

Esther could have been a notable artist, but she relinquished that path to help disabled children. How sad, Maria often thought, that Esther became disabled herself. All because of a crippling stroke.

One evening shift Maria saw the Rockport Police Department’s “wanted man” flyer in the break room. She immediately recognized the face in the composite sketch. It was Morrie Steinberg, Esther’s husband. He was a retired English professor. 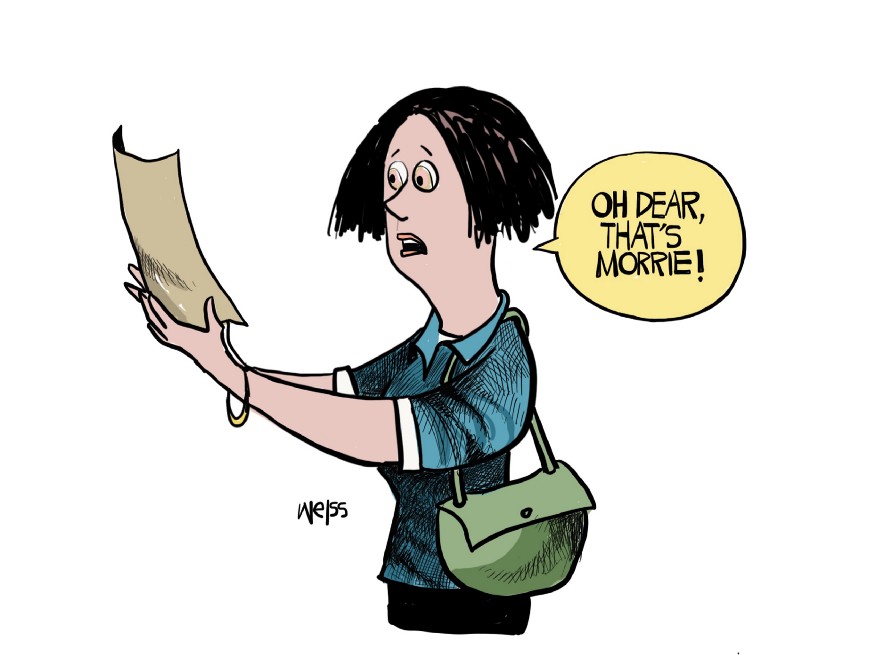 Morrie was a fixture at Oceanview Residential Community. He visited Esther every day and placed fresh flowers all around her room. Even though Esther could no longer talk, the tears of joy in her eyes said everything. Morrie would hold her hand and often tell her that since she could no longer paint, he would paint her room for her. With colorful flowers.

The free soul is rare

Morrie once told Maria that his wife Esther was unique. He said:

“Few of us ever attain what Esther has. Through her art and working with children, she found a life of peace and grace. Like Charles Bukowski once wrote, ‘The free soul is rare, but you know it when you see it — basically because you feel good, very good, when you are near or with them.’ And that’s how I’ve always felt with my Esther. So very good.”

Maybe Maria suspected all along that Morrie was the flower thief. After all, the thefts had been in the papers for a few weeks now. And who could miss the abundance of fresh flowers all around Esther’s room. But Maria knew that Morrie was on a fixed income and used most of his pension to pay for Esther’s care.

With tears in her eyes, Maria finally made the call. It was the right thing to do. Sergeant Jensen arrived within the hour and Maria told him everything about Morrie, Esther and the daily flowers he brought.

That afternoon Sgt. Jensen sat in the lobby and waited for Morrie to arrive. Sure enough, Morrie strolled in with a large backpack on his shoulder.

Sergeant Jensen immediately recognized Morrie’s likeness from the composite sketch. Morrie gazed over at Sgt. Jensen. He stopped walking and looked down toward Esther’s room, then back at Sgt. Jensen. “I suppose you’re here for me,” Morrie said. 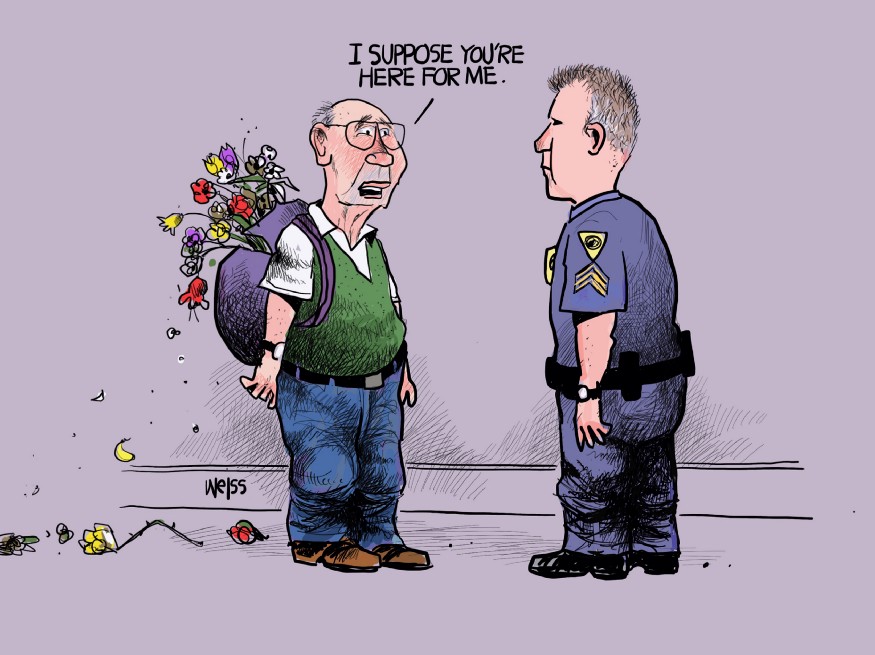 For the next hour Sgt. Jensen interviewed Morrie and got a full confession. “I used to buy her flowers. They made her so happy,” Morrie explained. “But money got tight, so I ‘liberated’ some local color to make a disabled woman happy.”

Sergeant Jensen couldn’t help but think of his own wife, Jennifer. How they’d been struggling lately with the mortgage and in their relationship. Maybe if he adopted the same sacrifice and love for Jennifer that Morrie had for Esther, life would be better?

Sergeant Jensen said he admired Morrie. Stealing was wrong, but his heart was in the right place.

There is a nobility in compassion

Morrie was quiet for a moment and then said, “Esther always said that we don’t live in a coincidental universe. Things happen for a reason. As the author Wally Lamb wrote, ‘The seeker embarks on a journey to find what he wants and discovers, along the way, what he needs.’ Maybe we were meant to meet? Either way, I take full responsibility for my actions. Will you at least let me say goodbye to Esther before you take me in?”

In the days that followed Morrie’s arrest, the town was abuzz with gossip and letters to the editor. Some were unsympathetic and congratulated the Rockport Police Department for solving the case. Others felt sorry for Morrie, but acknowledged that he shouldn’t have stolen all those flowers. And then the following letter to the editor was printed in the Rockport Herarld:

I’m a grade school english teacher. I couldn’t help but notice that Mr. Morrie Steinberg was once an english professor. It seems to me that Mr. Steinberg’s actions, while technically illegal, were motivated by love. If I marry some day, I pray it’s to someone like Mr. Steinberg. In John Connolly’s book ‘The Killing Kind,’ he wrote, ‘The nature of humanity, its essence, is to feel another’s pain as one’s own, and to act to take that pain away. There is a nobility in compassion, a beauty in empathy, a grace in forgiveness.’ Perhaps Mr. Steinberg can repay his debt to this community by volunteering his time in our local elementary school, teaching english? I for one would be honored to have him in my class room.

As luck would have it, District Attorney Edward Stansfield was reading the Rockport Herald the day Allison Melrose’s letter appeared. He couldn’t help but be moved. In short order he spoke to the assistant district attorney assigned to Morrie Steinberg’s prosecution.

The various victims were contacted about Morrie’s case. Once everyone learned of the motivation behind the thefts, a different tone emerged. One of forgiveness more than retribution.

Walter Higgins’ wife, Mary, had actually taken a watercolor class from Esther Steinberg a few years before her stroke. Other victims had seen Allison Melrose’s letter to the editor, and liked the idea of community service.

A new lease on life

Morrie began teaching english as an assistant instructor in Allison Melrose’s classroom. He’d forgotten how much he loved teaching, and felt that he found a new lease on life.

“Forgiveness says you are given another chance to make a new beginning.” — Desmond Tutu

More than the teaching, it’s what happened next that warmed Morrie’s soul and brought tears to his eyes.

Maria Contreras called Morrie and told him to rush over to Oceanview Residential Community. There was something he just had to see. People from all over town had brought something for Esther.

Morrie made his way from the school across town and ran up the steps to Oceanview Residential Community. “Is Esther alright?” he called out to the nurses and Maria. “Yes, Morrie, she’s fine. Go to her room and see her!” Maria said.

Morrie ran into her room and found Esther sitting up in bed, a broad smile on her face. The entire room was completely full of flowers. Freshly cut flowers adorned the shelves, windowsills, her bed, the desk and in pots and containers all around the floors. Flowers brought from the people of a forgiving, kind community. 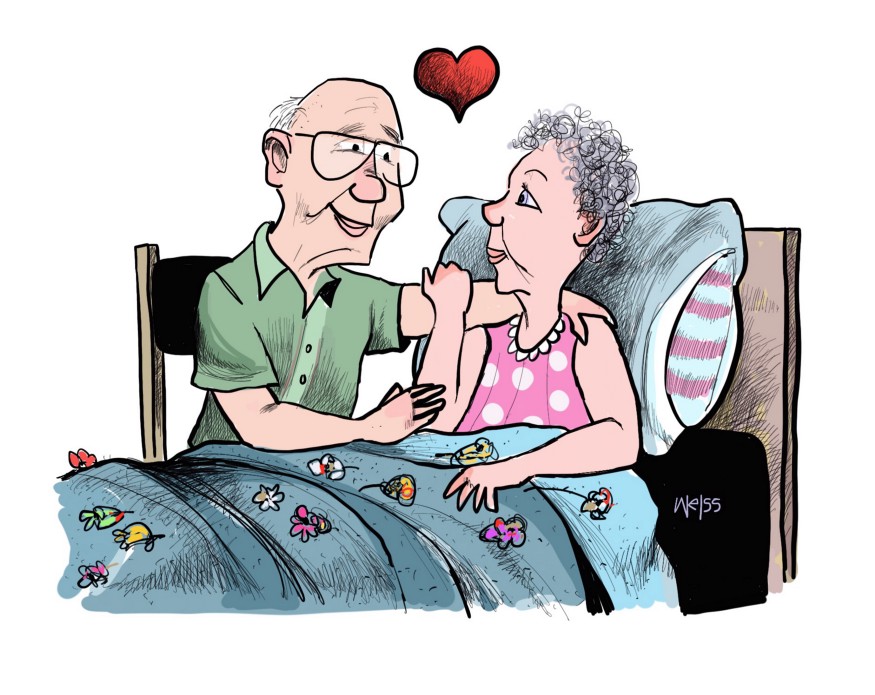 “What is this?” Morrie asked as he sat down beside Esther, holding her hand. And for the first time since her stroke, Esther looked Morrie in the eyes and slowly said, “It’s…love.” 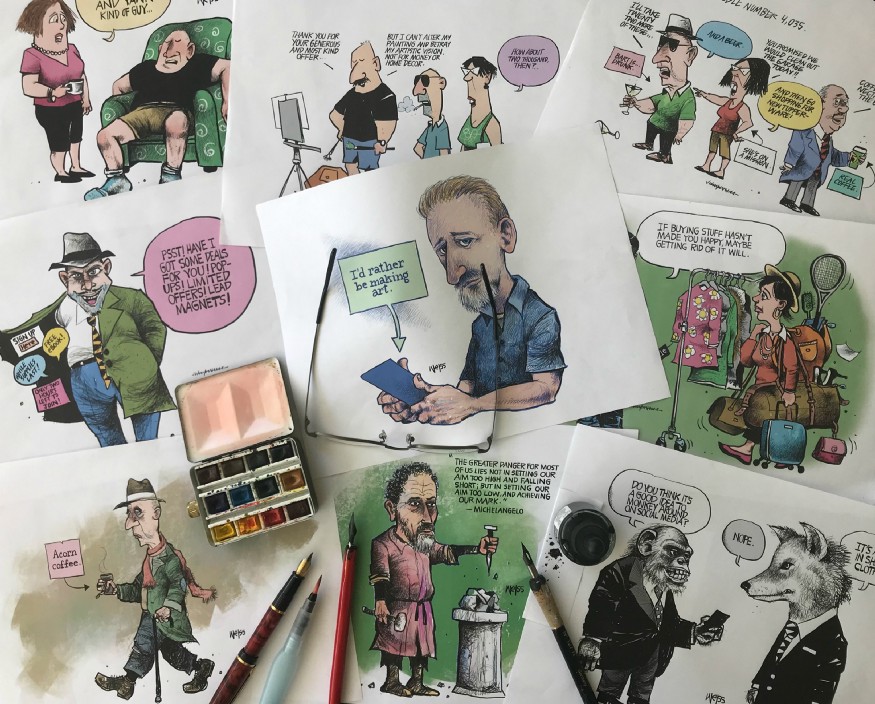