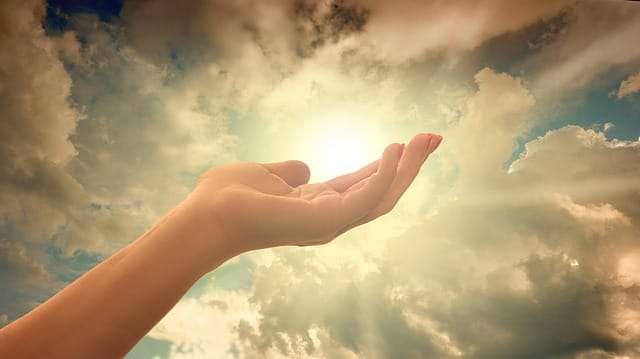 This is the announcement for a Sunday morning service for a New Thought community in my area at which I was invited to speak. I have been there and a few other churches in the Philadelphia region that are part of that philosophy and have found them welcoming. I say that I am like a visiting cousin since I don’t regularly attend gatherings there, but rather, go to a few interfaith communities to seek spiritual insights and nourishment. As an ordained interfaith/ecumenical minister, I like making the rounds. One of the cool things is that I get to choose the topic and extemporaniate as I am moved to.

The one whose life and death was a testament to love, inspires me to share my take on my relationship with Him. I grew up in a Jewish home in which Jesus was not a visitor. These days, he and many other spiritual teachers accompany me on my journey. We each have the unique spiritual path that no one can tell us how to traverse. On this Easter Sunday, contemplate how you resurrect yourself each day.

As I put together some semblance of an outline from which I meandered, I thought about the Jesus journey I have been on. As mentioned above, being raised Jewish meant that He was a religious icon for those whose worship took place in churches, not the synagogue where we attended services, although, of course, he himself was a nice Jewish boy whose title was Rabbi. That wasn’t much spoken about in my circles. I was taught that Jews were persecuted and killed in his name so when my parents permitted me to go to church with Christian friends and celebrate Christmas and Easter with them, it was hard for me to wrap my mind around that. I also wondered how Santa and the Easter Bunny knew to leave gifts and goodies at other people’s homes for my sister and me.

I learned that he manifested miracles and stood up for the downtrodden and disenfranchised. I liked that he seemed kind, but was puzzled with the hellfire and brimstone reputation some of his followers claimed to embrace. How could someone who supposedly came to Earth in the name of love, be used to hate? To this day, I still wonder.

And then there’s the image of a blue-eyed, light brown haired, tall and slim robe and sandal wearing man. One day when I was helping my dad clean the garage, I found a copy of Popular Mechanics. On the cover was a picture of how the historical Jesus likely appeared. The accompanying article indicated that he would have been short in stature, dark curly hair adorning his head, bearded, with brown eyes. This was the appearance of men of his culture in that part of the world. It changed my perspective a bit.

When I was in my early teens, my best friend, Barbara Chimel Cohen and I listened to the soundtrack of Jesus Christ Superstar over and over, until I had memorized the lyrics. One particular song had me questioning her since she had been raised in a Catholic home and attended parochial school and then La Salle College. It is the scene in which Jesus is having a God-versation in the Garden of Gethsemane. He is arguing with the Almighty about this whole dying on the cross idea. Not too keen on it, even though he knew that it was what was expected of him, asking ultimately what was in it for him. When all was said and done, he agreed to sacrifice himself. So, the legit query was if this was a negotiation between Father and Son, why were Jews blamed for Jesus’ death? Seems that all the players had a pre-ordained role. She couldn’t answer it. Many years later, after marrying her husband Glenn and raising their four children Jewish, she converted to Judaism.

A lighter version of the story of the last days of Jesus was the musical Godspell that was based on the Gospel of Matthew and it is a perennial favorite that I particularly enjoy listening to this time of year. It portrays a more approachable Jesus who is a team player.

When I was in my 20s, I began studying A Course in Miracles which is a three book series that focuses on love overshadowing fear and miracles being a natural part of life. The messages contained within came through a secular Jewish psychologist named Dr. Helen Schucman and the Voice that spoke was said to be that of Jesus. I was fascinated with the concepts and read it on my own and as part of study groups who would discuss what came up for us as a result. One thing that came up for me, was physical pain in the form of headaches. It felt as if the whole channeling Jesus thing flew in the face of my upbringing. I spoke to my friend Alan Cohen who was a teacher of ACIM who was raised Jewish and his response was simple, “A mystic meets on the point of agreement.” As an adult, I had the right to follow my own spiritual path and if I didn’t think my parents would approve, I didn’t need to discuss it with them. At that moment, I experienced a sense of freedom and whatya’ know, the headaches went away. I did eventually speak to my parents about it. The floor didn’t swallow me up and lightning bolts didn’t come crashing down.

In 1999, I enrolled in The New Seminary in New York City to become an ordained Interfaith Minister. The motto of the school was “Always in addition to, never instead of.” The program was founded by a rabbi, priest, minister, and imam. Sounds like the opening line to a joke. When I told my mother about my plan, she said, “I have one question for you. Are you converting?” When I assured her that I was not, but instead, expanding, she said she supported me in this and she and my dad flew up from Florida for my ordination. Their love and support meant the world to me. My mother called me her ‘Reverend Daughter,’ as a take-off on the title of Reverend Mother.

These days, Jesus has been showing up as a healer, teacher, guide, and friend. I see him as a way-shower with the reminder “I tell you the truth, anyone who believes in me will do the same works I have done, and even greater works, because I am going to be with the Father.”

I have seen a bumper sticker that reads, “So many Christians, so little Christ”

When I witness those who call themselves Christians spewing venom, I would like to ask them, “Who would Jesus hate?” and remind them that Christianity was never the religion OF Jesus, but rather about Jesus and call to their attention that the one they call Lord and Savior was a nice Jewish boy, after all.

Facebook13Tweet1PinEmailShares14
wpDiscuz
Share this ArticleLike this article? Email it to a friend!
Email sent!