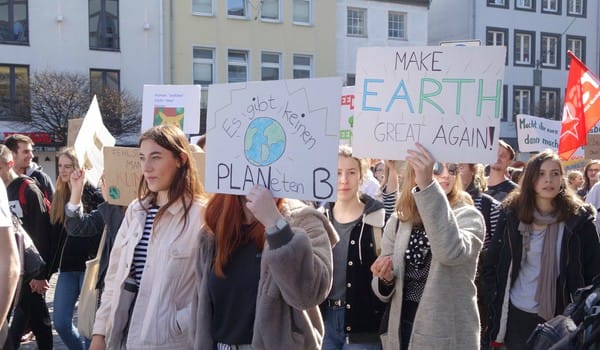 —
LONDON, 10 June, 2019 − How much of a threat is climate meltdown? Should we treat it as the biggest danger to life in the 21st century, or as one of many problems − serious, but manageable?

A new study says human civilisation itself could pass the point of no return by 2050. The Australian climate think-tank Breakthrough: National Centre for Climate Restoration says that unless humanity takes drastic and immediate action to save the climate, a combination of unstable food production, water shortages and extreme weather could lead to the breakdown of global society.

One renowned US climate scientist, Michael Mann of Pennsylvania State University, says that Breakthrough is exaggerating and its report could be counter-productive.

In the UK, though, Mark Maslin of University College London says the report underlines the deep concerns expressed by some security experts.

In a foreword to the Breakthrough study he writes: “We must act collectively. We need strong, determined leadership in government, in business and in our communities to ensure a sustainable future for humankind.”

David Spratt, Breakthrough’s research director and a co-author of the study, says that “much knowledge produced for policymakers is too conservative,” but that the new paper, by showing the extreme end of what could happen in just the next three decades, aims to make the stakes clear. “The report speaks, in our opinion, a harsh but necessary truth,” he says.

“To reduce this risk and protect human civilisation, a massive global mobilisation of resources is needed in the coming decade to build a zero-emissions industrial system and set in train the restoration of a safe climate,” the report reads. “This would be akin in scale to the World War II emergency mobilisation.”

“Maybe, just maybe, it is time for our politicians to be worried and start to act to avoid the scenarios painted so vividly”

Breakthrough acknowledges that the worst possibility it foresees − the total collapse of civilisation by mid-century − is an example of a worst-case scenario, but it insists that “the world is currently completely unprepared to envisage, and even less deal with, the consequences of catastrophic climate change.”

The picture of the possible near future it presents is stark. By 2050, it says, the world could have reached:

The report’s authors conclude: “The scale of destruction is beyond our capacity to model, with a high likelihood of human civilisation coming to an end.”

Warnings of the possible end of human civilisation are not new. They range from those which offer highly-qualified hope for humanity’s future to others which find very little to celebrate, even tentatively.

The Breakthrough study fits unequivocally into the second group. To weigh the credibility of some of its statements, the journal New Scientist looks at the sources they cite and the wider context of the claims they make.

Its scrutiny ends with the views of two eminent climate scientists. Michael Mann, professor of atmospheric science at Penn State, says: “I respect the authors and appreciate that their intentions are good, but … overblown rhetoric, exaggeration, and unsupportable doomist framing can be counteractive to climate action.”

For his part, Mark Maslin, professor of geography at UCL, tells New Scientist that the Breakthrough report adds to the deep concerns expressed by security experts such as the Pentagon over climate change.

“Maybe, just maybe, it is time for our politicians to be worried and start to act to avoid the scenarios painted so vividly,” he says.

The 2020 round of UN climate negotiations is due to take place in November next year, with hopes building that many countries will agree then to make much more radical cuts in greenhouse gas emissions than they have pledged so far.

Altogether 195 countries promised in 2015, in the Paris Agreement, to make the cuts needed to prevent global average temperatures rising more than 2°C, and if possible to stay below a maximum rise of 1.5°C, the levels climate scientists say are the highest that can assure the planet’s safety. But the cuts that many countries have promised so far will not achieve either goal.

Scientists say it is still possible for the world to achieve the 1.5°C limit. But doing so requires immediate emissions cuts, on a scale and at a pace that are not yet in sight − “a very big ‘if’”, as one of them put it. − Climate News Network