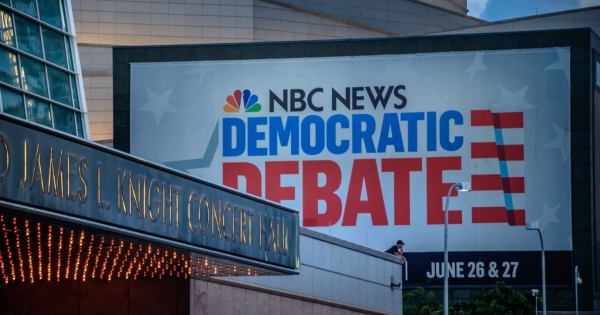 Patrick A. Stewart, University of Arkansas

As the Democratic Party continues to winnow its field of candidates to challenge President Donald Trump, it’s important to remember that the way candidates are covered on TV can influence public opinion. That’s become increasingly apparent in today’s media landscape, with several candidates jockeying for coverage during their party’s televised debates.

Scholars of political psychology like me – as well as researchers in other fields – have come to understand that what people see matters more than what they hear when making decisions about the leaders they will follow. A person who sees one candidate more than another will tend to prefer the one they see most – and perhaps be more likely to vote for that person, too.

My research group’s study of the 2016 presidential election found that front-running candidates received more camera time and were the focus of more flattering camera shots at the expense of other candidates.

Something similar appears to be happening in the 2020 Democratic primary race. Our analysis of the initial 2016 Republican and Democratic presidential primary debates found TV broadcasts showed front-runners for more time, and in more flattering views, than their competitors. Using the same method, my collaborators Austin Eubanks, Nicholas Hersom, Cooper Hearn and I analyzed the first and second Democratic Party primary debates, aired June 26 and 27 on NBC, Univision and MSNBC. Frame by frame, we scrutinized the footage on the basis of type of camera shot (head-and-shoulders, multiple candidates, side-by-side and split-screen), who was in the shot and how long.

Under the election microscope

In debates, candidates must impress – or at least not disappoint – viewers with their verbal prowess and their nonverbal communication skills. Their performance is limited by the cameras covering them. The production choices of how long to show each candidate and from what viewpoint may influence viewers’ conclusions about the candidates.

Being on screen at all is a big boost, and of particular importance are shots of a candidate alone, showing their head and shoulders. This provides a virtual face-to-face connection with viewers, which can provide a sense of intimacy and social bonding.

Most of NBC’s camera attention – more than 70% on each night – showed one or another candidate in this type of solo view, giving big boosts to those who spent the most time portrayed that way.

NBC spent relatively little time in competitive shots showing candidates either side-by-side or in split-screen. Those choices likely diminished the public’s perceptions of the Democratic candidates’ contentiousness with each other by not providing for candidate-to-candidate visual comparisons.

About one-fifth of the debate footage showed a multi-candidate shot, with three or more candidates in view. This widescreen view visually distances viewers from the candidates by dividing attention. The candidates who appeared most often in this type of shot run the risk of being seen and treated as irrelevant.

The candidates who spent comparatively little of their on-screen time in a wide shot were getting subtly preferential treatment. Most candidates spent about 60% to 70% of their on-screen time in shots with three or more candidates, but there were exceptions. In the first debate, O’Rourke shared only 57% of his shots with other candidates. In the second, Biden shared just 49% of his shots. Those were clear signals that TV producers considered them the front-runners in their respective debates.

What we observed in the June debates led us to hypothesize that those who got the most and best TV attention would do the best as their campaigns continued. The debate lineup bears that out: Of the 10 candidates who qualified for the Sept. 12 debate, all but one were in the top half of their initial debate in terms of total time on camera and the amount of time the camera was focused on their head and shoulders.

Andrew Yang was the only candidate who bucked the trend. He actually had less camera time focused on his head and shoulders than any of the other 19 candidates across the two nights – and spent 80% of his screen time situated with others.

We don’t know whether the choices made by TV producers and directors concerning how often and from which visual perspectives to show specific candidates follow the polls or drive the polls. Indeed, it is likely that a more complex psychological calculus concerning public opinion and market realities is at work.

Regardless, camera choices can subtly inform viewers about which candidates are seen as viable contenders and those who may not have much of a chance. People who watch the debates should be vigilant about how their opinions are being influenced not just by what they hear from the candidates, but how they see them on the screen.