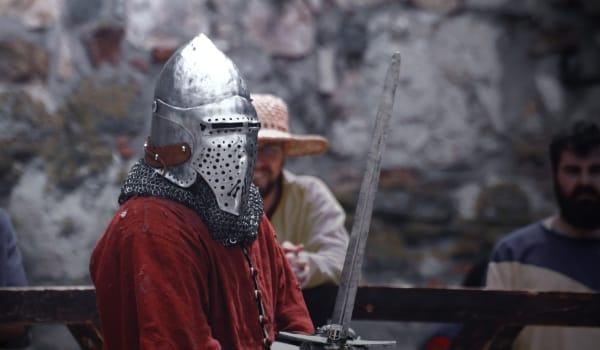 —
Have you ever had a bad date? I mean a really bad date?

Probably yes, because what makes bad dates so undatable is just the simple difference in ideas of what is fun and nice and enjoyable. What makes them so frequent is the fact that we humans have an almost indefinite range of options.

One example of a really bad date for me is one where a guy insists on paying for everything, spends more time complimenting my exterior attributes than getting to know my personality, and refuses to let me reciprocate any of those activities.

And if a man pulls my chair out for me, well, I will probably fall on the ground because I have been seating myself since I was two.

The point is: Many feminists have beef with this whole chivalry thing. Some people take this to mean that women only like jerks and not nice guys, yadda yadda, the whole nine yards.

But nothing could be further from the feminist truth.

The word “chivalry” is to feminism as the word “feminist” is to patriarchy.

Not great with analogies?

Me neither. So let’s unpack this one.

Feminism has all sorts of negative connotations in our patriarchal society: man-haters, crazy women, bra-burners. Without knowing a single feminist value, a lot of people hear the word and cringe according to the cultural norm.

Similarly, when feminists hear the word “chivalry,” we associate it with our cultural norms, taking into consideration its historical, archaic usage that deems us helpless, subservient objects.

Now, everybody hold the phone before we frenzy!

Because most people that use the word chivalry are trying to say something else completely.

And I hear you.

I’m not saying that people who value chivalry are bad. I’m saying that somewhere along the line, there’s been a little misunderstanding.

The truth is: Chivalry is one of the most misused and misunderstood terms today – which is understandable because it dates back over 800 years and spans many Western cultures.

In short: Chivalry originated as a synonym for knightly, meaning that it – quite literally – described the behavior of knights. From there, it developed into a code set by precedence for how knights should behave.

So, basically, chivalry is a word someone made up for stuff knights did.

Once that became a part of the culture, it was used to instruct knights and future knights on how to continue the legacy of stuff knights do to be knightly.

Over hundreds of years and many cultures, it developed to be understood as courtesy and politeness – an act of control over naturally wild and dangerous male nature.

Around the 1400’s, it became more specifically understood as gentle behavior toward women to communicate their unique status as non-aggressive members of the opposite sex.

Okay, okay, okay. So, in other words, in order to prove that they would not rape and injure women, a bunch of white guys decided to lift heavy stuff and open doors for them instead.

First of all, the idea that men have to prove that they’re not barbaric beasts is incredibly insulting to every human on the planet.

But also: Perpetuating the stereotype of men as inherently beastly, uncontrollably violent monsters that need to tip their hat or bow down in order to tell women they will not rape or murder them is crazy!

Can we just back this train up one second and identify the fact that if men need to vocalize or otherwise communicate their non-rapist identity, it is insinuating that the natural state of man is rapist and violent aggressor?

Therefore, if chivalry is meant to encourage men to tame their barely controllable violent and sexual urges, it directly correlates with narratives of rape culture.

So, now that it’s clear why feminists (or humanity in general) might be offended by this legacy of chivalry, it’s important to understand something else: “Kindness” and “chivalry” are not synonyms.

It is frequently assumed that feminist women want to do everything for themselves. As a single mother/student/waitress/feminist, I can tell you that is not at all the case. It is really nice when people pitch in here or there. And when I have the chance to help other people, I embrace that as well. I’m all about kindness.

That is: We, too – feminists! – also want guys to be nice to women.

And inherently, that isn’t defined as “chivalrous.”

Because the problem with chivalry is that it isn’t just about mutual kindness. It’s inherently a one-way street where only men are polite only to women. And no healthy relationship (platonic, romantic, or otherwise) can be built on that.

So I want to make the argument that engaging in actively reciprocal kindness and respect instead of chivalry will not only be a better intention, but will also be better received.

Here are a few ways that we can be kind without being chivalrous.

How to Encourage Kindness and Respect – Without that Pesky, Rapey Subtext

1. Be Kind and Respectful to Everyone

Because you are a kind and respectful person, and not because of some mysterious, invisible, magical qualities certain people’s private parts posses.

To say that chivalry is sexist doesn’t mean that men shouldn’t open doors, buy meals for, or smile at women. Go right ahead! In fact, that behavior is often encouraged.

However, it is also encouraged toward other men.

But as soon as you assume that those actions aren’t acceptable because you’re OmgNotGay, then you’re equating being nice to people with being sexually attracted to them. And, uh, that’s creepy.

Chivalry does not equal respect. But politeness sure does.

That’s not to say that guys who associate themselves with chivalry don’t also do nice things for other guys. In fact, the point is that they probably do!

So keep being nice – to all sorts of different people.

One big problem with chivalry is that the word insinuates it is “courtesy and politeness” with a really specific purpose.

If you ask someone to join you in an activity, and you really want to pay for it to reciprocate the kindness they showed in spending time with you, that’s awesome.

If someone has their arms full and you can in someway assist by opening a door or helping to carry their stuff, then oh yeah, that sounds great.

If you have been occupying a seat for a while, and someone gets on the bus or walks in the room that looks like they could really use a rest, it would be very generous to offer it to them.

If these are the things you do on a regular basis, I think you’ve already got the right idea on how to treat people, but perhaps you’ve been using the wrong word.

Those are examples of genuine kindness, not chivalry.

However, if you do one of these things simply because someone happens to identify as a female, it just gets weird. To be honest, it just makes a lot of women feel weird.

If I (a female) am sitting on the bus and a man walks on that has three kids with him, or maybe just a ton of groceries, or if he just looks real tired, I will definitely give up my seat.

There’s no need to call it anything else or have any other reason.

If you wish to signal to women, children, and society in general that you are not in any way a rapist or vagrant, go about your daily life without raping, robbing, or injuring a single person. Ever.

When you are in the grocery store, don’t punch or grope anyone. When you are at the gym, don’t whistle or catcall at people. And don’t encourage other men to do these things.

No secret codes. No sexism. No rape culture. Just humanity.

Rape culture is de facto sexism. It’s about subtle ideologies that culture perpetuates in everyone – men and women. And it is the responsibility of individual minds to identify places that cultural ideologies need to change.

Healing rape culture is a cultural discourse, not a gender war. It is incredibly rare that what one person intends to communicate is received in complete accuracy.

Sometimes I feel as though this is a bullet point in everything I write or verbally discuss. In this case, I think it really is the core issue with chivalry.

Because if you act in a certain way you think will be appreciated and it is not, perhaps you should instigate a conversation about why your counterpart feels that way.

It seems so obvious, and yet it is so rarely done in a genuinely effective way – even by myself!

I’m not trying to say you have to communicate my ideas or anyone else’s, but instead of defensiveness and insults, remember that open communication is nothing to take personally.

Try to outline your viewpoints (maybe using a format similar to the one above) for yourself and then share them with others. So, if someone you love tells you you’re acting chivalrous and it’s offensive, maybe you can list the reasons you don’t think it should be interpreted that way, and hopefully they can reciprocate.

Or on the flip side, if someone you love staunchly defends chivalry and it irks you beyond belief, try breaking it down for them.

Nobody is psychic, and communication makes sure they don’t have to be.

So is chivalry a part of rape culture?

Chivalry, as it can be taken with all of its historical context and breadth of connotation, can be considered to be a part of rape culture.

However, people who are attempting to be “chivalrous” – as they interpret the word – probably are not perpetuating rape culture. Because there is a disconnect between the reality of the word and its perception.

But it’s an important thing for everyone to remember is that chivalry is not just being nice to women.

Chivalry refers to all of its historical relevance.

It carries the weight of patriarchal male privilege and female subordination dichotomies.

And if you’re not trying to bring up all that jazz, then maybe chivalry simply isn’t the word you’re looking for. (If you are writing a paper on Sir Gawain, on the other hand, then it probably is the word you need.)

Healing the part that “chivalry” plays in rape culture can begin right this second by informing as many people as possible the-truth about chivalry, why some feminists hate it, and how to keep being kind and respectful the feminist way: to everyone, regardless of race, class, ethnicity, gender, sex, sexuality, hair color, nose shape, toenail length, pants size, lipstick shade, and well, you get the point.

A version of this post was previously published on Everydayfeminism.com and is republished here with permission from the author.

END_OF_DOCUMENT_TOKEN_TO_BE_REPLACED

Facebook20TweetPin1EmailShares21
wpDiscuz
Share this ArticleLike this article? Email it to a friend!
Email sent!